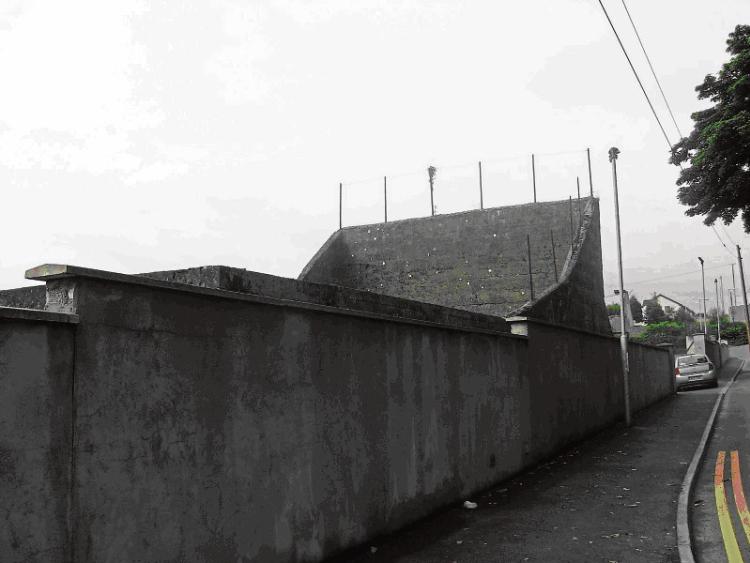 During the March-June Covid-19 lockdown, Garreth Byrne of Dromahair Heritage Group researched and wrote a longer piece on Handball. Here is an extract from the article. We would welcome readers' memories of handball alleys around the county

Handball was a keen Gaelic sport in Leitrim and many other parts of Ireland during the first half of the twentieth century.

With the gradual arrival of television and motorised personal transport, the handball alleys in many places were abandoned and allowed to gather moss and wild grass. But nowadays the sport has been making a comeback.

Old handball alleys have been restored and roofed. Mod-cons like plexiglass walls and wooden floors and special spectator seats have been added – the architects have done amazing work. Young people have come into the game and are giving it a competitive zest.

Let me draw attention to a few places in Leitrim where handball alleys were once lively places for sport and socialising.

Between 1981 and 1983 I lived in a rented cottage beside Lough Adoon in the Doonkelly-Leckaun area. I often drove along Fivemilebourne and Calry to my office in Sligo. In Fivemilebourne, which shares a boundary between Leitrim and Sligo, I often glanced at a 3-sided handball alley plonked oddly in a field beside the road and wondered, why in that lonely looking spot?

I later learned that the land was provided by Captain J.J.White, once an important landlord in the area. The plain cement and concrete handball alley was built by local labour in 1938. Until the late 1980s young people converged on the site during dry weather from summer to autumn to play handball there. Since then it has been abandoned and gathers grass and moss. The cement ground is sad-looking.

Sean McTernan remembers happy times: "Yes I remember those Sundays spent at the alley in Fivemilebourne and some long summer evenings as well - a great way to pass a Sunday - often didn’t get to finish a game due to losing the ball in the bushes behind the alley. Then if you had 3 penny’s it was down to Elleys shop for the 3 penny Klipso bar or if you were flush of a Sunday and could find a bike it was off to Dolan’s at Calry creamy for 6 penny wafer ice cream.

Towards the middle to end of the 80s it became very difficult with the floor the way it had deteriorated but still was good fun. Time brings changes and a finish to our hand ball games in Fivemilebourne alley, but very memorable. In good weather socialising at a handball alley was important for younger people.

Manorhamilton in the Bee Park GAA complex was another busy venue for handball. The handball alley, visible from the road, dates from the 1930s. About fifty years ago the game lapsed and the alley in the Bee Park became tatty. You can observe on top of the main wall wire netting that was put there to prevent high balls from falling on to the road.

Kevin Comiskey, from Leckaun not far from Fivemilebourne and today involved with the Leitrim Hillfarmers Association in the I.F.A., remembers playing handball regularly in Fivemilebourne in the 1970s.

He gave me this information about Manorhamilton’s alley: "The Ball Alley in the Bee Park was built in the 1930s. Sean Farrell (Park Road) wrote an item about Handball in the Glencar/Manorhamilton GAA History book that was published/launched in August 2019.”

Thady McTernan, Johnny Keaveny, Sean Farrell and Dominic Rooney among others were familiar with the sport.

The good news is that plans were in place, before the Covid-19 lockdown, to give handball a new whack in Manorhamilton. In January 2020 an upbeat report in the Leitrim Observer announced that “The ancient Irish game of handball returns to Manorhamilton this coming week after a gap of many years; probably well over a half a century now. On this Friday, January 31 from 4pm to 6pm, the Glencar-Manorhamilton Handball Club will be hosting an introduction to handball in St Clare’s Comprehensive School, just off the Carrick Road. The age groups will be as follows: 8 to 10 year olds from 4pm to 4.40pm, 10 to 12 year olds from 4.40pm to 5.20pm and 12 to 15 year olds from 5.20pm to 6pm.”

Let us hope that when normal post-Covid-19 life reasserts itself the younger generation, with the experience of older people to guide them, will bring serious handball back to Manorhamilton.

Other places where handball was played in the early decades of the 20th century include Glenfarne, Lisgorman (near Killargue) and Dromahair. The Dromahair alley was off Market Street near a tall building that once served as a courthouse. With redevelopment, all traces of this alley have gone.

Drumkeeran has a happier story to tell, as a look at the excellent website will show: Link: The website states: In Drumkeeran in the autumn of 1929 a handball alley was opened. Online information states that a GAA club as such was not registered until 1933. It goes on: “After the building of the alley, handball flourished in the 30's, 40's, and 50's when it lapsed for a time to be revived again in the late 60's. Several marvellous tournaments were held throughout the years; however, in later years (the 70's, 80's and 90's), the handball alley was neglected until it's demolishment in year 2000.”

The old handball alley stood opposite the present day post office run by Mary Bohan. Modern houses were built on the site and nearby as the village grew bigger. A new state-of-the-art handball alley was constructed at the GAA sportsground and later, on an upstairs level, gym facilities were installed. Sports prospects look good in a village with a wide surrounding catchment area. Lough Allen College students have been active players. It is hoped that Covid-19 restrictions can soon end.

Fenagh and Drumshanbo are two other Leitrim venues for the serious competitive sport of handball. Drumshanbo has had active handball since the early 20th century and the club secretary can be contacted here:

In Drumsna on the Shannon a 1937 schools folklore survey contributor, Moira Lynch, tells of the athletic exploits of a local man who emigrated to South Africa: “There was another man named Willie Dalrimple  who also was a noted handballer and a great swimmer. He won many gold medals for playing handball and also for being a famous swimmer. He resided in Drumsna about fifty years ago but he is now out in South Africa. He came home on holidays to Drumsna a few years ago.”

In South Africa Irish missionary teaching orders introduced handball alleys as part of their school buildings, so Willie Dalrymple in exile was able to enjoy playing a sport from the old country.

Meanwhile, about 700 handball alleys are scattered around Ireland in various conditions of use and disuse. Architects regard them as examples of ‘vernacular architecture’. Archaeologists think many of them could be preserved as examples of contemporary archaeology. Folklorists and historians consider their social dimension. Some communities want another sports option.

And during the long summers, weather permitting, many children would like to hang out and socialize as others play the old game. In a few places summer dancing in handball alleys would seem to be a safer option than Dancing at the Crossroads, with so many vehicles driving by.