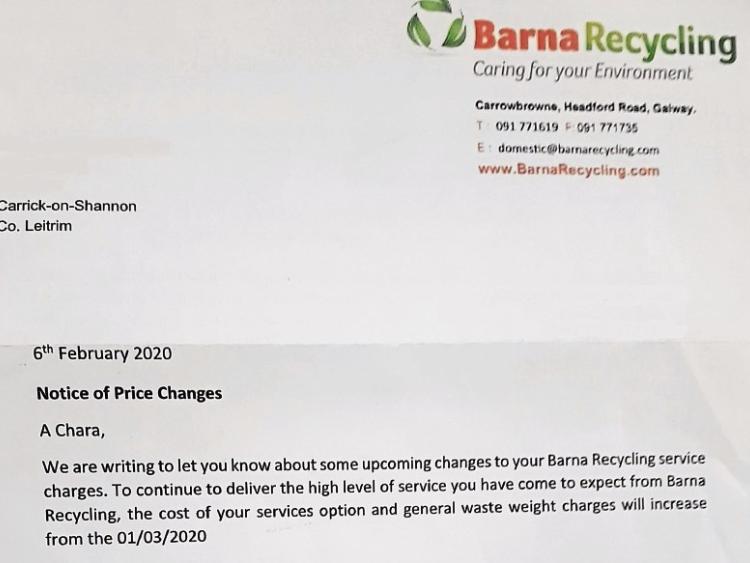 Customers have reacted angrily to Barna Recycling's plans to increase costs for its refuse collection service in Co Leitrim.

In a letter sent out to householders earlier this month, customers were informed of plans to increase the quarterly service charge by €9 and to also increase general waste weight charges effective from March 1, this year.

Barna Recycling has blamed rising insurance premiums, rising costs associated with meeting waste regulations and standards, and the increased cost of processing recycled materials for the decision to implement price increases for customers.

In a two page letter the company said that the new charge per each bin lift will now be 25c per kg in weight charges for general waste, up 3c per kg on the previous charge.

However it is the €9 increase in quarterly charges which is causing the most consternation. This follows on from a €7 quarterly increase last year.

The planned increase in charges has not been welcomed by customers with many taking to social media to vent their frustration.

Some customers argued there was an obvious need for “more competition” in the Leitrim market to help bring down prices.

One customer pointed out there had been increases in quarterly charges in 2019 adding “how can they justify another €9 hike? I'll be making a call!”

Another customer said she had contacted Barna Recycling to voice her opposition to the increases noting: “made phone call, no use at all. I wasn't the only one phoning so hopefully they'll get a few complaints. But I fear it'll be of no use as they have the monopoly with no one to challenge them and no where for us to go if we don't want to pay!”

One customer wrote on social media that she had received an email response to her query about the planned price rises from the company. She published images of the email response on Facebook noting that in the email the company had acknowledged “your upset and dissatisfaction as regards the upcoming price increase.

“Unfortunately, we could just no longer sustain the price point we were offering,” the email from customer services at Barna Recycling went on to state.

The email went further to explain the reasons for the price increase and to add: “We do apologise for any dissatisfaction this has spurred among the Leitrim customer base, and yes, if anyone does wish to close their account or look into alternative providers they are totally within their right to do that and we understand that choice.”

Barna Recycling was contacted by email and phone for comment in relation to this story but no response was available at the time of going to press.