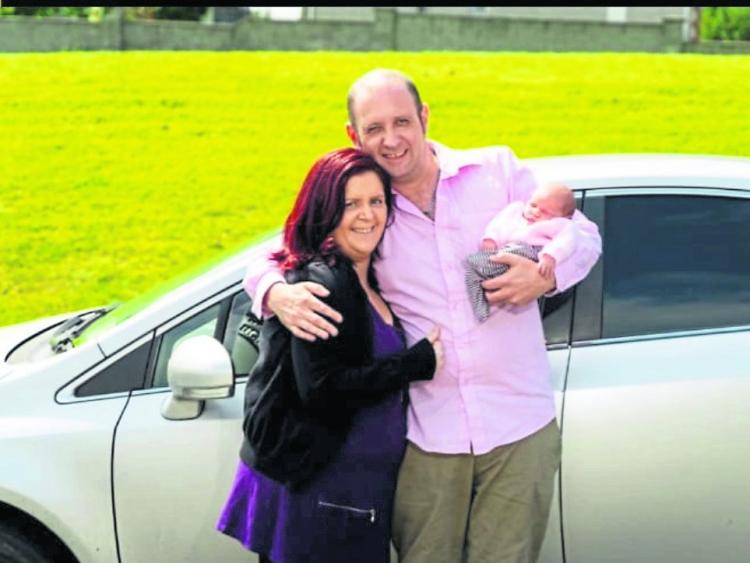 “I had to stand up and be counted,” says a Tipperary man who delivered his baby on the side of the road this month.

Despite the couple being six miles from Clonmel, baby Saoirse wasn’t waiting around for a hospital delivery and made her grand entrance into the world on the passenger seat of the couple’s Toyota Avensis.

“All my kids have been born in Clonmel and are through and through Tipperary,” says Clonakenny’s Owen, who has a 15-month-old son with Breda and another child from a previous relationship.

“I thought we would definitely make it to the hospital and then it all happened so fast.

“Breda’s waters broke and it had reached the point where I had to pull in on the hard shoulder and deliver the baby. I didn’t ring for an ambulance because we were six miles away and it would have taken the ambulance a half an hour to come,” he says.

“When the baby arrived, I put her on Breda’s chest and cleaned the mucus so that she could breathe. I’m not medically trained so I didn’t cut the umbilical cord,” Owen continues.

Owen feels “proud as punch” after the feat. “I didn’t think I had it in me. I’m afraid of the dentist and needles, but the adrenaline just took over. Luckily we were in the Toyota Avensis because we would have been rightly snookered if it was a Mini,” Owen laughs.

“When we arrived at the hospital, everyone was looking at us with pure amazement as we walked in with the Saoirse. They were congratulating us and couldn’t believe what had happened. Even when I went in to collect them two days later, the staff were still amazed by it all and there were people looking for photographs with us.”

Breda and Owen called their newborn Saoirse because the name means “freedom” in Irish and symbolises how she entered the world. “Saoirse was six and a half pounds - the perfect baby! She is absolutely flying it and thriving being at home. She looks a lot like her mother,” Owen added.

Now a mother of three, Breda says giving birth on the passenger seat of a car at the side of the road was a “crazy” experience.

“I have always been induced, and I was getting pain on the way down in the car. We were worried with there being no doctors around.

“I was like a demon but Owen was so calm. I just knew I wasn’t going to make it to the hospital,” Breda says.

“I was in the passenger seat holding onto the handle on the door. The pain was so bad that I wasn’t able to talk. When I told Owen my waters had broken, he pulled in. After literally two pushes, her head appeared and Owen ran over to the other side of the car and grabbed her. He was amazing and so brave,” Breda continues.

Breda praises the staff at South Tipperary General Hospital for their after birth care and attention. “We met a porter on the way into the hospital and when we met him afterwards he said ‘you aged me by 20 years’. He got an awful fright,” Breda recalls.

“The porter came out with a trolley and I had to climb out of the car and get up onto it. One of the nurses went to take the baby off me but didn’t realise she was still attached. The midwives and staff couldn’t have been nicer and don’t get enough praise. I couldn’t imagine doing the job that they do. When we went into the maternity ward, everything was so calm,” Breda says.

Breda says the Covid-19 pandemic is a “nervous time” for pregnant women. “Women have the fear of giving birth on their own, particularly young girls having their first baby. It’s also very hard on fathers as well. They can’t go into the hospitals, and Owen could never come with me for a scan. I always had to show him,” adds Breda, who is from Borris-Ileigh.