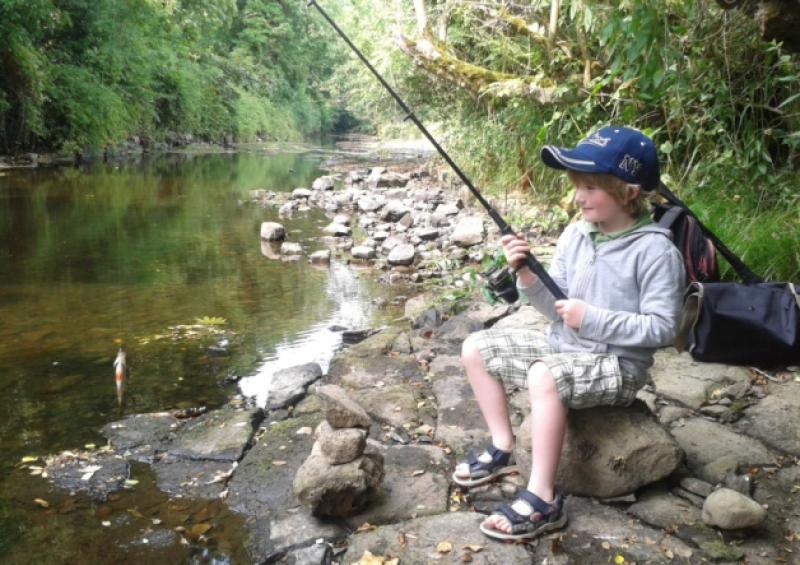 I hope you all had a great bank holiday weekend with lots of fish caught by all. The Last Cast - Jarlaith Gallagher

I hope you all had a great bank holiday weekend with lots of fish caught by all.

The return of our traditional summer weather has meant a welcome rise in water levels on our lakes and rivers. As you shall see from my photograph the rivers were in dire need of some fresh water.

Last week just before the start of the deluge I took my son (Iarfhlaith) out to a local river for a little spot of trout fishing. I took my little 7ft fly rod and Iarfhlaith had his telescopic spinning rod.

We got to the river and I was quite surprised to see how low the water was, it was as near to the bones as I had ever seen. As we made our way upstream, trout skimmed off ahead of us looking for deeper water.

A well-proportioned Charolais bull determined our fishing spot as Iarfhlaith reckoned the bull did not want us to go into his field, and I did not argue with his logic.

As we set up the rods, a kingfisher flashed past and my fishing partner was adamant that what I saw was in fact a blue fairy airplane, I did not argue.

With the firm wriggly garden blackhead on the hook, a trout made a splashy rise just upstream of us and I got Iarfhlaith to cast as close to where he saw the circular ripples. “Now what do we do Dad”? “Patience is what we need now, so we wait” I replied.

After about ten minutes amid near non-stop questioning and phantom bite sightings, the line straightened and jerked the rod off it’s crude limestone resting place.

Iarfhlaith got a fright but I told him to pick the rod up and reel it in. He soon had a little perch flapping in front of himself.

I wet my hand and firmly held the struggling fish in order to de hook it and get it back into the water as quickly as possible. As I took the hook out of it’s lip, a little spot of blood appeared.

My fishing partner noticed and exclaimed; “Now I know Dad”. I asked him what did he now know and he replied, “ The little fish is the patient and he got cut with the worm and we are the doctors to fix him”.

How could I argue with that?

The club would like to announce in collaboration with fishingfever.ie that a Pike Fly Fishing Competition shall take place on Saturday the 21st of September at Lough Rowan, Co. Leitrim.

The details are as follows:

€1000 worth of prizes, all profits will go to the club – www.Rinnshannon.com

Many prizes to be won / sponsored by FishingFever.ie

This should be an excellent competition and it is quite possible that fly-fishing for pike records, could be under pressure that day, you heard it here first!

Until next time, tight lines.