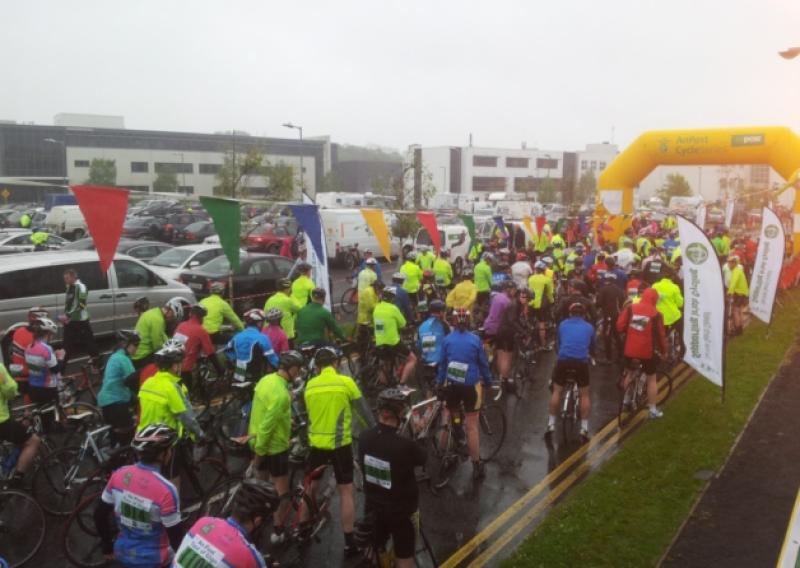 My muscles are aching, my clothes are sweaty and I feel like I have been put through a meat grinder. But I did it. I cycled 60 kilometres.

My muscles are aching, my clothes are sweaty and I feel like I have been put through a meat grinder. But I did it. I cycled 60 kilometres.

For those of you who are regularly on their bikes, a little 60k jaunt would be like a spin to the shops for you, for me it was like putting two Everests on top of each other, covering them in honey and asking me to walk them on my hands.

I am still buzzing with the sense of achievement, it was a goal I had set myself back in January and to have finally done it makes me feel like I could do more; you know I think I even dropped a few pounds during my time in the saddle!!!

Of course I am talking about the An Post Tour of Sligo event that I participated in recently, (and yes I am still going on about it).

It was a truly amazing event. There were some 2,000 cyclists hitting the roads of Sligo and a little bit of Leitrim.

The event was very well organised with hundreds of stewards, John Tracey former Olympian and member of the Irish Sports Council raised the flag to let us off.

The rest stops were well signed and there was a great sense of camaraderie and fun about the whole thing, particularly for those of us that were just doing the 60k event.

And that was what I loved the most about the whole thing, the sense of fun and enjoyment among those participating.

Like most people I have always seen these groups of cyclists flying along the road and thought they must be super fit athletes. I thought I could never be one of them, that I’d had one chockie biccy too many to ever be able to consider joining the ranks of these super fit people. My good friend Michael Harte from Cloone had been on to me for a few years now, encouraging me to get on my bike and train for a cycle event, and thanks to Michael and indeed my own family’s words of encouragement, this was to be the year that I finally got off my backside and became a cyclist.

And you know, cyclists are ordinary normal people just like you and me, the only difference is they make the decision to get up and get out and push those peddles and work their backsides off the sofa and onto the roads.

The event was in aid of Special Olympics and it was great to see so many people out doing something good for themselves and also benefiting such a great cause.

However the most important outcome from the whole event was the undoubted benefit this is going to have for tourism in the region.

There were 2,000 people from not alone Sligo and Leitrim but from around the country taking part and despite the weather being a bit inclement, it was an amazing Tourism advert for the region.

I cycled away beside a few people from Meath and Kildare that had never been to the region and were amazed with how scenic it was.

We started at IT Sligo, which truly is a great facility and one that we are very lucky to have on our own doorstep.

Once through the town it was out to scenic Strandhill. I am amazed there was never a crash as we got the first view out over the bay looking down at Coney Island because every single person was too busy looking at the view instead of the road.

There were good crowds out along the route to cheer us along as we came through the village of Strandhill and headed out by Ransboro. You could literally hear people gasping and see them gawping at Knocknarea and the scenery around the back of Strandhill.

I think it is one of the most scenic parts of the region and I was proud to be from here. Then it was onto Ballisodare and right though the middle of the village, where again there were people out to support us, which just added to the great atmosphere.

After we crossed the main road it was onto Ballygawley and then into Ballintogher for an egg sambo and cup of coffee, before returning onto the saddle and setting eyes on my beloved Leitrim.

Now I felt a little bit more comfortable as this was where I have been doing my training. And coming through Dromahair, there were more audible gasps from people around me who were commenting on how scenic and tidy the village was.

And just when they thought they had seen the best bit of Lovely Leitrim, along came Parkes Castle and Lough Gill. It was just magical and to be honest really made you appreciate how beautiful it is to see it through the eyes of others.

The final run was a bit of a push up the long hill at Cloherevagh and then it was down hill all the way to IT Sligo and back to where we had started.

To quote Ernest Hemmingway “It is riding a bicycle that you learn the contours of a country best, since you have to sweat up the hills and coast down them. Thus you remember them as they actually are, while in a motor car only a high hill impresses you, and you have no such accurate remembrance of country you have driven through as you gain by riding a bicycle.