A sense of real satisfaction 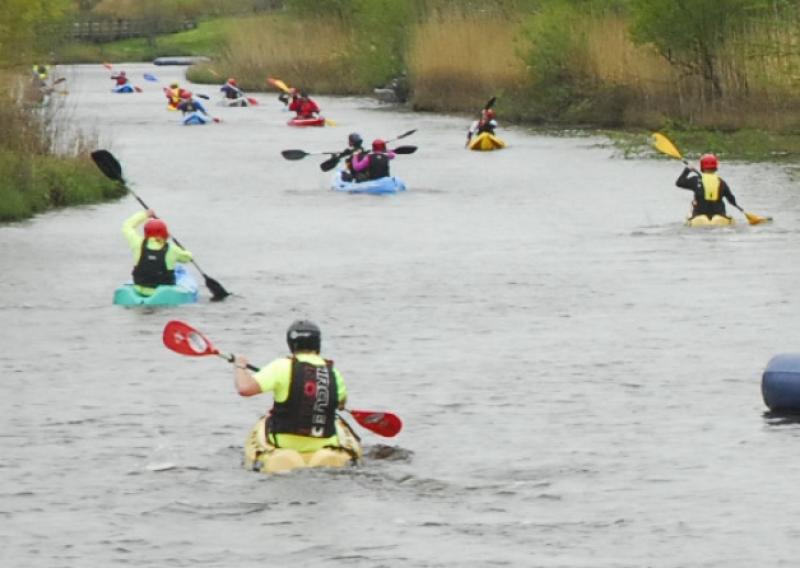 As I crossed the finishing line of the Blueway Adventure Race the MC shouted ‘you’ll give us a good write up in the Leitrim Observer next week won’t you!’

As I crossed the finishing line of the Blueway Adventure Race the MC shouted ‘you’ll give us a good write up in the Leitrim Observer next week won’t you!’

My immediate reply was ‘I’ll curse ye!’ but then the burning in my lungs began to subside and the pain in my arse started to ease (just one of the consequences of riding a bike that’s frame is a few inches too small for you as hard as you can for 32k) as the flow of the endorphins returned a broad smile to my face.

I could see the same sense of satisfaction from the eyes of my fellow participants as we gathered in St Joseph’s Centre in Leitrim Village to continue our shared experience by exchanging trail tales and breaking bread together to replenish our spent energy reserves.

The unanimous consensus was that it was a professionally organised event taking in a wonderfully diverse landscape with even a few Carrick (Brian Crowe) and Annaduff (Alan Rowley) lads I chatted afterwards admitting it had been years since they had seen some of Leitrim locations we had covered by foot or by bike or by kayak for that matter, if ever.

I had similar thoughts running through my head as I cycled out of Keshcarrigan and rounded Lough Scur. I was taken back to my days of U16 and minor county training as the bus barrelled around those roads to collect the likes of Conor Doherty with its motely north Leitrim constituents (Gareth Phelan, Pat McEneaney, Ollie McBride, Tom Gilmartin etcetera) already onboard and in full banter mode.

I vividly recalled the location where a round bale – a foreign and rare sight in those days – had (evidently making a break for freedom) barrelled down from a hill-side meadow on the upper side of the road to finally come to rest in a watery grave in the small lake on the far side of the road. As tragic an end as Steve McQueen in the Great Escape, surely.

My first trip up Sheemore did not allow me the reflection period I had often imagined it would although on reflection the experience did contain elements reminiscent of a religious pilgrimage complete with mental and physical absolution obtained through the healing white heat of pain.

As I got off my bike – which I’d confidently predict at 20-years old was the oldest in the race – I realised my feet were completely numb from a combination of the cold, the constant pressure being exerted on them, and perhaps my improper positioning on a mount that is a little too small for me.

Why do I cycle it then? It’s a personal thing as I’ve explained on these pages before. It’s the bike that belonged to my dearly departed brother Gordon and whatever the sense of satisfaction that is obtained by propelling oneself through time and space on two wheels, I find it is exponentially magnified when such a personal resonance is attached to the experience.

I chatted to Gordon on several occasions during the cycle and it was lovely to reconnect to him the week after the thirteenth anniversary of his death. I name-checked a few other people in the Heavens during the cycle too but the language used isn’t suitable for publication in a family newspaper.

Running with numb feet is one of the strangest sensations imaginable. This was the first transition event I have competed in and my moving from the bike back to a run after 27kms was an entirely new experience for my body and mind.

I had tried to replicate the experience in training the past few weeks but time, or the lack of it, meant I wasn’t able to get anywhere near the distances involved in Saturday’s event.

I took some reassurance from the fact that the competitor in front of me also seemed to be trying to convince his heart that his feet would also need a blood supply if the head was serious about putting forward the notion of summiting Sheemore.

Thankfully, just moments before the feet, backed up by their union partners, the legs, downed tools and went on an all-out strike, the last minute labour-court negotiations proved successful. The head can be a very canny negotiator.

Of course it wasn’t only lads battling with/enjoying the experience. I spent most of the cycle desperately trying to keep up with the two lead females who I discovered from the results were Michelle Lennon and Aileen McNamara.

Michelle’s hill-climbing prowess was phenomenal while Aileen showed tremendous grit to recover lost ground when her chain came off after exiting Keshcarrigan.

It was lovely to see the few locals along the route coming out to the roadside to cheer on the passing participants. The event was also excellently stewarded while the hard work and planning by Lee Guckian, Fergal O’Dowd, Jonathan Barry and the organising committee and supporting team ensured the day ran like clock-work and showcased the locale to the highest of standards.

I would encourage the committee to repeat the event again next year as I’m sure the positive word of mouth promotion from this year’s participants will guarantee an even bigger crowd in 2016.

I would add the caveat that such events require the fullest support of the local community and no small committee can sustain them into the future on its own. Should too much load be left on too few people burnout is inevitable and an event that has the potential bring huge numbers to the region could simply cease to exist.

There is another worthy community event taking place in Drumshanbo this coming week with Mickey Harte amongst a notable panel of guest speakers addressing the topic of positive mental health.

Organised by the local Cara Pharmacy, the event, with Charlie McGettigan acting as MC, will take place in the Ramada Hotel on Thursday May 7, at 8pm. Do yourself a favour and pay a visit. You never know what you might learn.