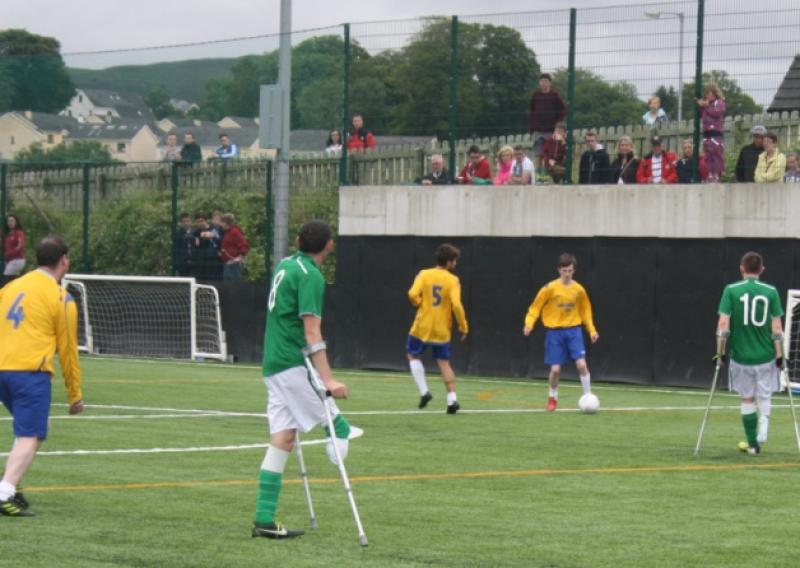 Last Sunday proved to be a day to remember for all associated with Abbey Rovers, Carrick Town and Manor Rangers as the FAI came to visit their respective clubs as part of the ‘Festival of Football’ that is ongoing in the Sligo/Leitrim region.

Last Sunday proved to be a day to remember for all associated with Abbey Rovers, Carrick Town and Manor Rangers as the FAI came to visit their respective clubs as part of the ‘Festival of Football’ that is ongoing in the Sligo/Leitrim region.

It would be easy to be critical of an organisation who have attracted much negative attention in recent months for a variety of reasons. The wages of the organisation’s CEO John Delaney, the €5m reportedly received from FIFA and various concerns expressed by Irish fans in relation to heavy handed security operations in the Aviva Stadium to prevent protests at Ireland matches against the association have all attracted negative criticsm.

Those issues were all put to one side on Sunday as the FAI put their best foot forward in an effort to show unity with the football community throughout the region.

John Delaney agreed to speak with the Leitrim Observer when he visited Manorhamilton, but only on the condition that no questions of a national issue were raised.

He did confirm Martin O’Neill would not be leaving his position as Ireland manager to join Leicester City but other than that the focus was on the work being done on the ground.

It would be easy to concentrate entirely on the CEO and the state of the game in this country but that would do a mis-service to the clubs who put much work into highlighting the good work they are doing in their respective communities.

As part of the Festival of Football Manor Rangers organised an exhibition match against the Irish amputee team, and for many in attendance it proved to be an eye-opening experience.

Under the guidance of Christy McElligott the Irish amputee team, who are ranked 18th in the world took on Manor Rangers in an exhibition match and the large crowd were treated to a lively affair that finished 1-1.

In a message posted on the Manor Rangers Facebook page McElligott thanked all involved with providing the opportunity for the Irish team to create awareness of amputee football and the hospitality offered by Manor Rangers.

“I know I speak for everybody involved in the senior squad of players that our youth academy players would have never experienced anything like the applause they got yesterday for the exhibition they put on yesterday. We also would like to offer our past player and true friend and gentleman (Manor Rangers Chairman) Sean Gallagher all the plaudits in the world for giving us this opportunity to give people an insight into amputee football and hopefully those whose witnessed the game can also spread the word of how good our game is.”

Sometimes it’s very easy to be cynical and critical about ongoing issues at national and international level, other times it is much more rewarding to be inspired by the good work that is being done at a local level.