First issue to be included next week 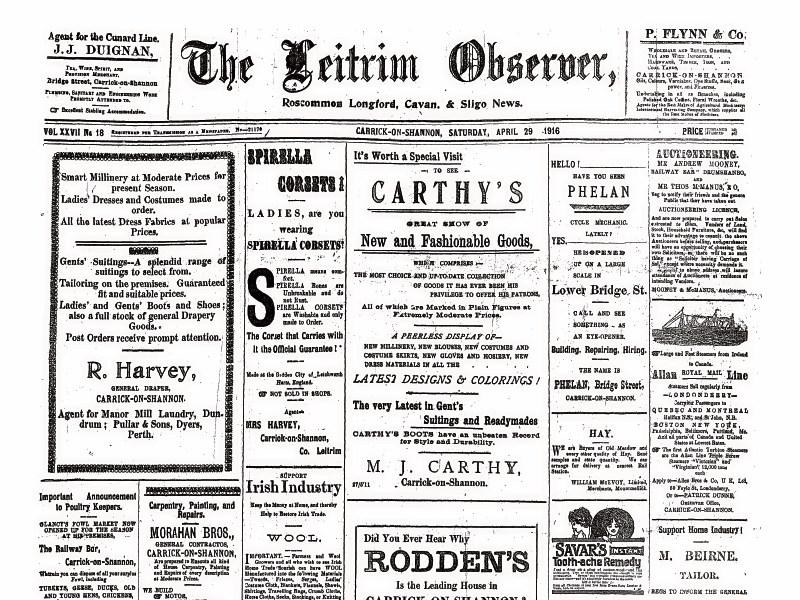 Next week will see the Leitrim Observer produce the first in a four part series of our 1916 commemoration broadsheet supplements.

Following detailed research we will be following the events on a week to week basis which lead to the Rising and its aftermath and the part Kiltyclogher's Sean MacDiarmada played and the role of Carrigallen's adopted son Thomas Clarke.

In our first issue we follow the time line leading up to the Rising and what was happening in the county, the atmosphere and attitudes of that year.

We look at the man that was Sean MacDiarmada and how he became involved and the role he played which lead to him being one of the signatories of The Proclamation.

We also follow the life of Thomas Clarke, the part he played and how he also became one of the seven signatories.

Many people will not be familiar with the name John Daly but he too played a pivotal role in the events leading up to Easter 1916.

The Police Files from that time give us an insight into these how men were being monitored and their actions spied on as they planned for the Rising.

However life at that time was not all about the rebellion as people went about the day to day of ordinary life.

In stark contrast to the national papers we take a look at the pages of our own paper to see what was making the news locally and how life continued as per the norm for many.

In our future issues we focus on the other men who fought, many of whom remain unknown but through the diligent work of our local historical societies, we have uncovered their story.

We will be delving into the Rising itself, the events of those six days and its aftermath.

The executions of those involved lead to the nation taking a very different stance to both the men and their actions.

Their last letters, their last meetings with family have all been sourced by the Observer newsroom staff to give you, the reader, an emotional insight into the aftermath of Easter 1916.

In our final edition Irish Times journalist and Carrick native Ronan McGreevey will be focussing on the family of Sean MacDiarmada.

In a tragic irony following his death Mac Diarmada’s siblings emigrated en masse to the US, with the exception of his sister Maggie, who remained in the family home in Kiltyclogher. Historian Prin Duignan will also take a look at the role the Irish language played in how the rebels corresponded with each other.

Throughout the four week series we will be featuring old pages from the files of the Leitrim Observer.

So don't miss next week's Observer for the first in this four part special.