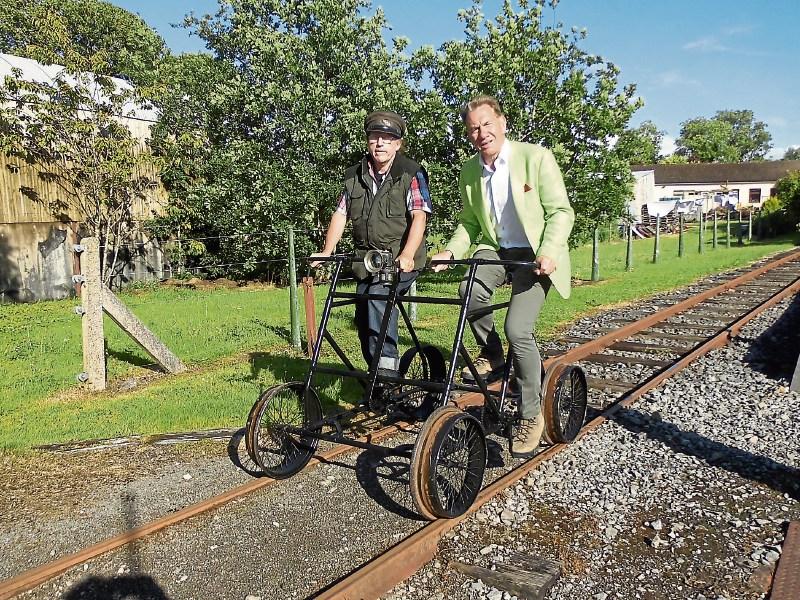 Portillo visited Dromod on July 1 with a BBC crew crew to film a piece on the Cavan & Leitrim Railway and the change in trains and their use from Victorian times to now.

The Cavan & Leitrim Railway was a narrow-gauge railway in the counties of Leitrim and Cavan which ran from 1887 until 1959. Unusually for Ireland, this 3ft gauge line survived on coal traffic, from the mine at Arigna.

It outlived most of the other Irish narrow-gauge lines, giving a further lease of life to some of their redundant engines.

This is a replica of the original inspection bicycle which sadly was scrapped in 1959 when the railway closed.

The wheels are originals acquired by Michael Kennedy over the years from different sources. Most of the construction work was carried out by Lawrence Breslan and Paul Gunning. It performed perfectly on the day and Michael Portillo clearly enjoyed it and thought it was great fun.

Owner of the facility Michael Kennedy told the Leitrim Observer the BBC got in touch with the volunteer organisation three weeks before the visit and they worked on the inspection bicycle and set up the area for the film crew.

Michael said the Cavan & Leitrim Railway will feature on the BBC programme as one of the stop-offs from the Dublin - Sligo line.

Michael said Portillo was “impressed” with the amount of restored items the organisation has acquired over their 25 years.

On July 2, the replica inspection bicycle got it's second outing and was tested again when well-known narrow gauge experts Andrew Waldron, Andrew Wilson and Danny Sheehan from England visited Dromod. They had much fun and went at breath taking speeds to truly test the skills of the bicycle.

The piece filmed for BBC on the Cavan & Leitrim Railway is expected to air in January 2017 and Michael hopes the publicity will help bring more visitors to the fascinating tourist attraction, which has restored trains, buses, airplane cockpits and much more from as far back as 1887.

The tour which is open every Saturday, Sunday and Monday and is run by volunteers tells many forgotten stories from the era of the narrow gauge train and includes a train ride along 0.4 km.

More details on the Cavan & Leitrim Railway including the stock it has for public viewing and plans for the future will feature in next week's Leitrim Observer.