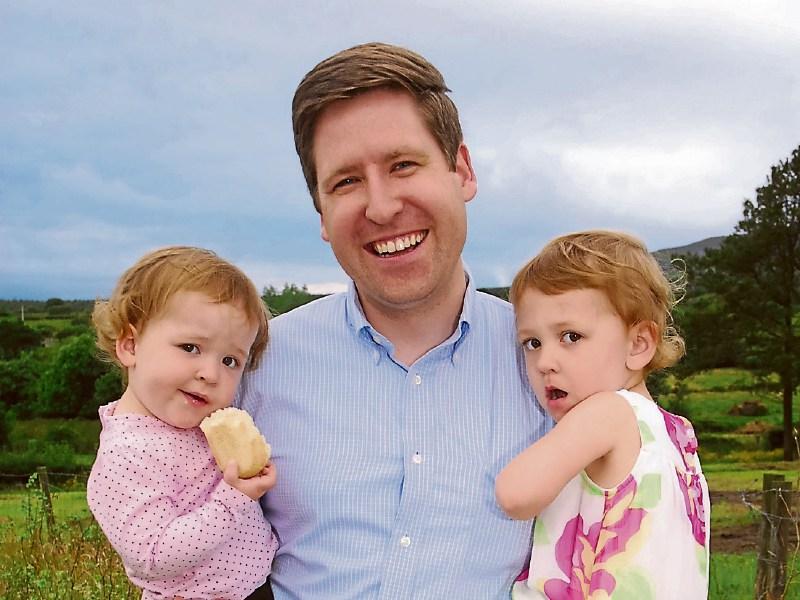 Colm Willis, who won the Republican candidate nomination for Oregon in the May US Primary elections recently took a break with his family to visit his ancestral home in Knockacullion, Aghacashel.

Colm's parents Tom and Mary, along with his cousin Bridie Reynolds (nee Boyle) and her husband Dennis, own the homestead in Knockacullion and the area remains an important part of his family's heritage.

“I have lived in Oregon all my life but my great-grandfather, Jimmy Skinnon, came from Leitrim. He left school at just 10 and came to work on the docks of New York,” said Colm.

Jimmy's daughter was brought up in New York, married and, with her husband, started a Ford dealership following WWII. Her son, Colm's father, Tom, went to Harvard Business school and eventually worked for Intel.

“So for my family it has been a story of coming to another country, coming as my great-grandfather did, with just a 5th grade education and then, through the generations, taking advantage of opportunities and seeing success. For Jimmy coming to America it was a chance to come to America and live the dream and we, his descendents, have built on that,” he said.

Acknowledging that his family had no previous involvement in politics, Colm explains that his interest stemmed from his first job after college where he worked for the Joint Economic Committee in May 2008.

“I got hired just as the economy crashed and I saw leaders of both parties (Republican and Democrat) giving money to big lobby groups . I became very disillusioned and I left after about a year,” he explained.

However, after he married, his wife Joan and became the father of two little girls, Ainne and Roisin, Colm says that his interest in politics was rekindled.

He describes America as the “most free place in the world” and says that their political system reflects this freedom with anyone able to put themselves forward and very little, to Irish eyes, restrictions on what can be spent or said during election campaigns.

“People say to me, “why don't they (those in charge) stop people from saying and doing things in the election, that they find outrageous, but the reality is that there is no 'they' running things. People have the freedom to say and do what they want and that is something we, as Americans, believe is important, freedom.”

Colm's home town in Oregon is part of a large farming district and crops such as blueberries, hazelnuts, hops and pinot noir wine grapes are all grown in this area.

Another big issue is the timer industry and, in particular, the impact of conservation on the industry and the job losses resulting from reduced harvesting.

“Harvesting was a major source of funding for our police force and our education system. When harvesting declined so did our funds. The Federal Government said they would give us direct payments to make up the loss but in the last five years they are cutting payments and a lot of counties are struggling to fund their police and education systems,” he said.

He acknowledges that immigration remains a key issue in America.

“For our voters the question is not about the immigrants themselves, it is about our leaders in Congress and how they have failed to deal with the issues surrounding immigration,” he explains.

“People are very disillusioned with how immigration has been dealt with. The fact is that most Americans are descended from immigrants and when they look back at the way their families came through Ellis Island, the health checks and suitability checks they went through to come into America, and now, we have a situation where people are being let into the country without any of this checks.

“People want a proper structure in place so we know who is coming into our country and why.”

Colm will be seeking election to Congress in November and, if successful, will take up a two year term in Congress.

In Oregon, voters won't take to the polls like they do here in Ireland, instead, voting is done by postal vote. While voting in the US, as in Ireland, isn't compulsory, Americans typically have a much higher turnout for elections (70-80%), something Colm attributes to a tradition of much stronger involvement in the political system for the average American.

However he says that Ireland, and in particular Co Leitrim, will always hold a special place for his family and himself.

“I was brought up with a strong love for Ireland. I play the flute, I went to the Gaeltacht twice growing up, I learned set dancing and I have visited here often throughout my life

“This is the place we can always come back to , a place to remember the love and sacrifice so many made through the generations for us. People like my great-grandfather Jimmy, who left with the hope that his children could have a better life, could be free,” he said.

“The people of Ireland are the guardians of that legacy, that history and love of Ireland and every time I come home I feel a part of that.”