1933 deportation described as an abuse of the law 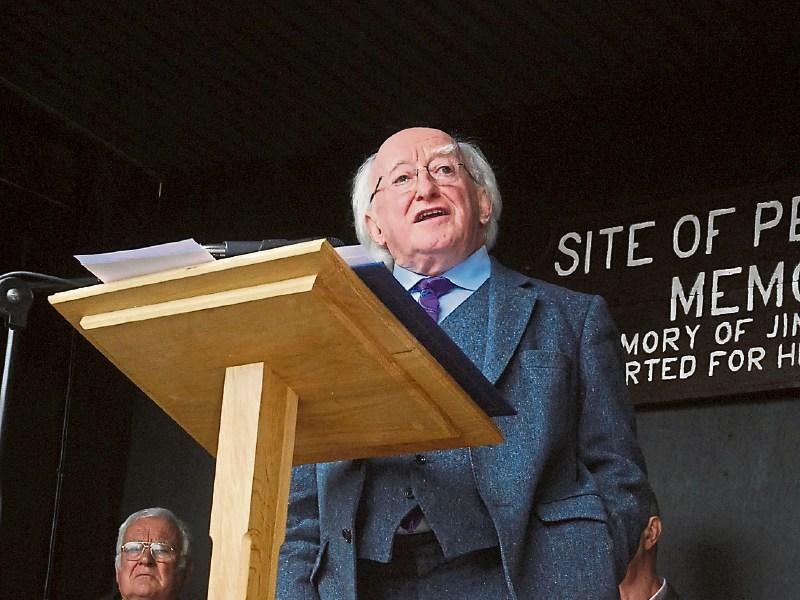 In an unprecedented move, Present Michael D Higgins, apologised to the family of Jimmy Gralton for the “abuse of the law” which led to the deportation of Jimmy Gralton in 1933 - the only Irishman ever to be deported from his own country.

Addressing those assembled at Effrinagh near Carrick-on-Shannon for the unveiling of a memorial to Gralton last Saturday, President Higgins said: “Jimmy Gralton was, for authoritarian political purposes, mixed with clerical pressure, illegally deported from his own country for his political beliefs.

“I come to acknowledge a too long hidden or suppressed story – the wrongful intimidation and ultimate deportation by an abuse of the law, of Jimmy Gralton, to whose memory, and whose family, an apology is due.”

Jimmy Gralton was deported as an “undesirable alien” by the Irish government in 1933.

In a moving and emotional ceremony at the site of Gralton’s “Pearse Connolly Hall” President Higgins said “Jimmy Gralton’s treatment at the hands of the Irish State and its agencies was wrong and indefensible. As a Head of State, I acknowledge that the State’s authority was abused under undemocratic pressure.”

Others who spoke at the event, which was chaired by Cllr Declan Bree of the Gralton Commemorative Committee, included the Cathaoirleach of Leitrim County Council, Cllr Mary Bohan, Eddie Glackin of the Communist Party of Ireland and Paul Gralton who spoke on behalf of the family. Greetings received from the National Chairman of the Communist Party of the USA, John Bachtell and from film director Ken Loach were also read out as part of the commemoration.

Responding to President Higgins’s remarks, on behalf of the Gralton Committee, Cllr Declan Bree said “As we stand here on this historic occasion, at the site of Jimmy Gralton’s Pearse Connolly Hall, just a 100 yards or more from the homestead where he was born and reared, we commend you for saying what others feared to say, we thank you for your sincere and moving remarks and we know it will mean so much to the Gralton family, and to all those who have kept the memory of Jimmy Gralton and his principles alive over the decades.”

The Cathaoirleach of Leitrim County Council, Cllr Mary Bohan, said “The importance of this commemoration is that it shows that history ought not to be just the property of victors, the powerful and those in charge, but that it is part of all our lives no matter where we are or from where we come. In this sense I say that we are commemorating a people's champion, and that is what James Gralton was.

“James Gralton was wrongfully deported from his native land and his native county not because he did anything wrong or unlawful but because his ideas were deemed unacceptable. May this monument go some way in expiating the wrong that was done to him and to be a lasting reminder to us all of this great man.”

Speaking on behalf of the Communist Party of Ireland, Eddie Glackin said “Let Jim Gralton’s life, words and action and those of his heroic comrades be a guide to us all today. When Gralton was on the run across the county, those who supported him painted a slogan on bridges and gable ends: Up Gralton! When the first commemoration took place three decades ago local people turned up wearing stickers with the slogan Up Gralton! Today it is the turn of this generation to continue that struggle and give meaning again to that slogan Up Gralton!”

Paul Gralton, on behalf of the family said that Jimmy’s story and the hall built by the people of Effrinagh, “is like a candle in the window, a sign of all our hope for a better future forged by knowledge and tempered in truth, free from old superstitions and prejudice. In this memorial event, people have come together again - Jimmy’s spirit lives on.”

In his message the Chairperson of the Communist Party of the USA, John Bachtell, referred to Gralton as a hero of both Irish and United States labour. Had Jimmy Gralton not died of cancer in 1945, it is highly likely that he, like so many others, would have been targeted for persecution by the anti-communist right in the United States during the ‘McCarthyism’ period.

“Given the pattern of persecution in those days, it is not improbable that the US government would have tried to deport him back to Ireland!” he said.

During the course of Saturday’s ceremonies President Higgins also planted a tree in memory of deceased members of the Gralton Labour History Committee.

Committee member Edwina Guckian, presented the President with a copy of Good-Bye Twilight, Songs of the Irish Struggle” published in 1936 which contains a poem by Lyle Donaghy, relating to Gralton’s deportation - “A Leitrim Woman”.

Donaghy was a member of the Gralton Defence Committee in 1933. The President’s wife, Sabina Higgins was presented with a pose of flowers by Kealin Beattie.