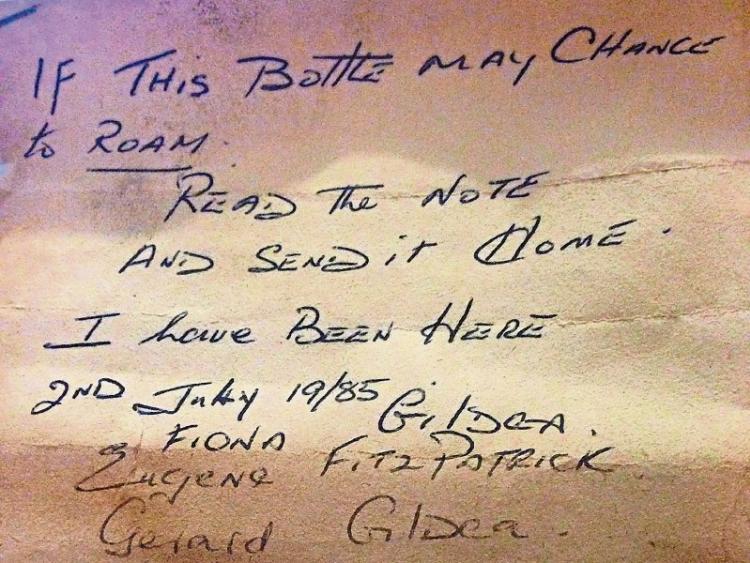 A message written locally 31 years ago and placed into a bottle on Lough Scur, Keshcarrigan has been found and returned to the original authors.

Last week the Leitrim Observer found a post on Facebook which showed a letter found on Lough Scur and seeking the original authors.

The paper shared a picture of the letter on leitrimobserver.ie, Facebook/leitrimobserver and @LeitrimToday with the names of those on it and within hours the true authors were revealed and plans were in place to return the letter!

Siobhan Gildea contacted the paper to tell us that her mother Noeleen Gildea had written the message on July 2, 1985 with her kids and friends who were visiting.

The letter is dated July 2, 1985. It was found by Lisa Cawley and her boyfriend Kerey Breeze on the October Bank Holiday weekend on the shore of Lough Scur.

The message “If this bottle may chance to roam, read the note and send it home” was written on a page torn out of a Black Beauty book.

Siobhan said the family live locally at Cornagon, Keshcarrigan, just a few miles from Lough Scur and her siblings plus friends of the family had signed their names to the note.

She said the Gildea family were “surprised” to see the letter turn up 31 years after it was sent sailing in a bottle on the lake. “It is fantastic, my brother and mother remembers writing the note.”

She said efforts and plans are in place to reunite the letter with her mother.