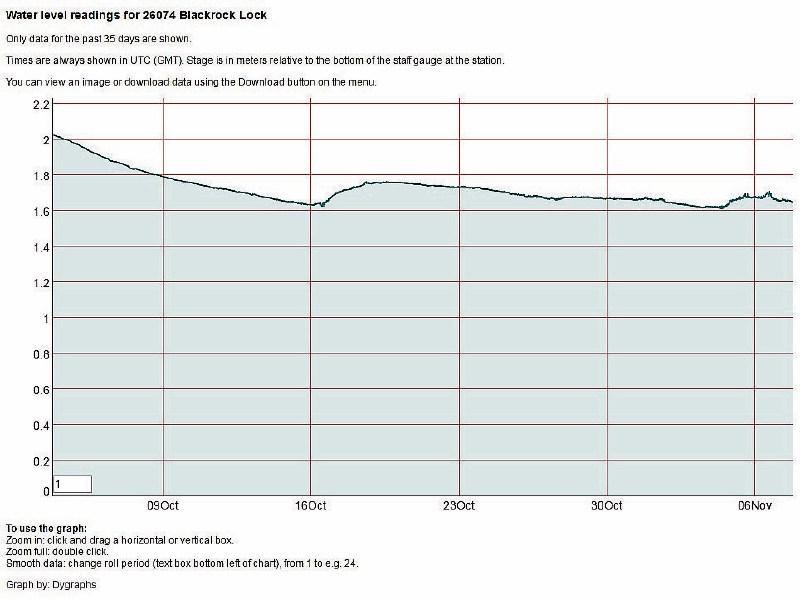 The water level on Lough Allen will be lowered this Winter, but locals want to know will the new level be maintained?

Last week The Office of Public Works (OPW) confirmed that the levels of Lough Allen will be lowered this Winter to ease a build-up of water at pressure points downstream.

Although the lower level was activated in October, which was a very dry month, Carrick Flood Action Committee said the level is “1.4m off the record lowest level.” They say the lake is at “navigation level.” They said the above graph shows the levels are not being maintained, while Lough Ree has remained steadily low for the month.

John Dunne on behalf of the committee asked the paper to investigate if this lower level will be maintained throughout Winter or if it will be allowed to rise due to rainfall.

The group told the paper “We think the lake is not being managed in a way which anticipates or reacts to rainfall at present.”

ESB generates electricity at Ardnacrusha hydroelectric power station near Limerick and uses the water flowing in the river for this purpose.

The paper queried the issues with the ESB and a spokesperson said, “ESB is in discussion with the Office of Public Works (OPW) and Waterways Ireland in relation to lake levels at Lough Allen with a view to seeing if it is possible to operate the lake at lower levels in the Winter period. This would involve reducing the level by about 0.7m during October, and this has already happened. This may have some flood relief benefits for small to medium floods.”

In relation to maintaining this level throughout Winter, the spokesperson said “The extent to which the level can be kept lower will depend on the weather over the winter period.”

Leitrim County Council has spent €2 million on numerous road raising projects to alleviate funding. The council told Cllr Finola Armstrong-McGuire this week that they have obtained planning approval for raising road levels at the rear of the hotels in Carrick-on-Shannon.

The Council is working with the OPW to improve the river channel at Mountcampbell and Jamestown and have submitted an application for funding to the OPW.