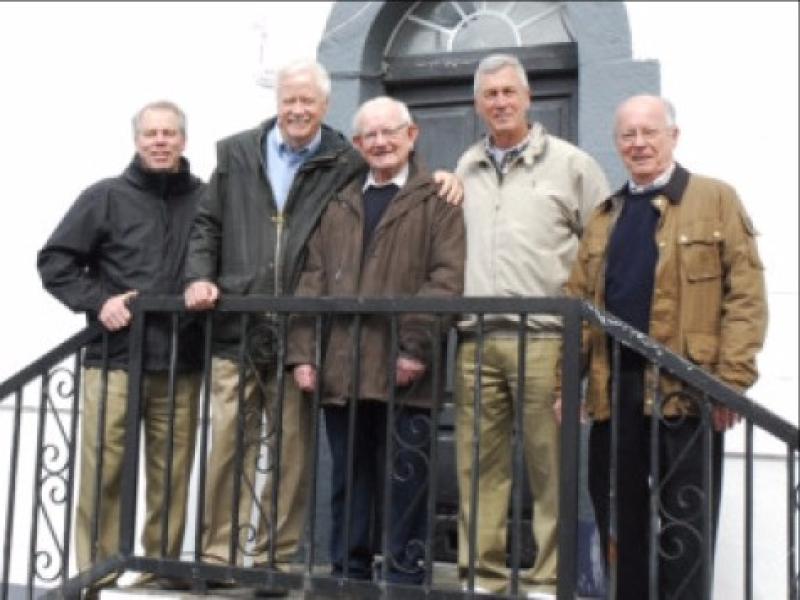 The late Greg Dunne (centre) pictured outside the old Leitrim Observer building in Carrick-on-Shannon Peter; John, Alfie & William Bucknall who are the direct descendants of Francis Mulvey, who owned

The funeral arrangements for the former owner and editor of The Leitrim Observer, Greg Dunne from Summerhill Court, Carrick-on-Shannon have been announced.

Gregory passed away after a short illness on Thursday morning, November 24 in University College Hospital Galway and is survived by his twin brother Angus and children Geraldine, Pat, Jacqui and Natasha and was predeceased by his wife Margaret and daughter Albertine.

Reposing at his residence on Saturday, November 26 from 4-8pm. Removal on Sunday, November 27 to the Patrician Hall, Cortober, Carrick-on-Shannon for Mass of Christian Burial at 1.30pm with funeral afterwards to St. Mary's Cemetery.

No flowers by request, donations in lieu, if desired to the North West Hospice, Sligo. House private on Sunday please.

Gregory Dunne had a 35 year association with the Leitrim Observer, serving as editor of the paper from 1968 to 1984 while he also acted as the managing director of the paper.

The staff and management of the Leitrim Observer and Iconic Newspapers would like to offer the Dunne family our deepest sympathy on the sad passing of Gregory. The Leitrim Observer has lost a legend of our own history. May Gregory Rest In Peace.