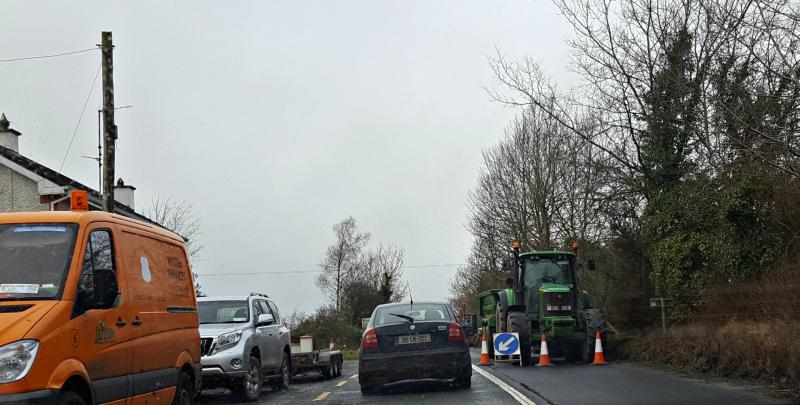 Council staff completing works on a burst water main outside of Mohill recently.

Irish Water has issued an apology to customers connected to a 'troublesome' water line in Mohill after it burst twice in just 48 hours last week.

The Ussaun-Kildoo water line has experienced 27 bursts over the last 30 months according to figures provided to the Leitrim Observer by Irish Water.

On Saturday, January 14 the water line burst just outside of Mohill town and supply was turned off from midnight on to 12 noon on Sunday, January 15 to allow repairs to be carried out.

However, a second burst occurred on the same water line on Monday, January 16 morning resulting in a “small number of houses experiencing water outages between 6am and 12 noon”.

Cllr Seadhna Logan contacted the Leitrim Observer to express the anger and frustration experienced by residents living along this water main.

“This is an ongoing problem,” said the Sinn Féin councillor, “people are absolutely disgusted.

“Residents are getting seriously annoyed about the consistency of the bursts. There is a large number of houses affected and I don't believe it would be allowed to happen anywhere else in the county. Irish water need to act on this.”

A spokesperson for Irish Water stressed that during the two incidents over January 14- 16, “the reservoir in Mohill was full and ensured the majority of houses in the area had a continuous supply of water.”

The spokesperson, however, acknowledged that the water supply in this area was problematic.

“Over a 30 month period, Irish Water, working in partnership with Leitrim County Council has repaired 27 bursts on this line,” she noted.

“A tender was advertised to replace this line last September and Irish Water expects to have a contractor on site early this year with an estimated completion date set for the third quarter of the year.

“Irish Water and Leitrim County Council would like to apologise to anyone affected by these bursts and thank the local community for their continued patience and reassure them that a solution will be in place in the coming months putting an end to the continuous disruption to supply that has affected local households, businesses and the farming community,” added the spokesperson.

However Cllr Seadhna Logan said that the situation was far from satisfactory for the people affected by the water line bursts.

“Something has to be done now. It is simply unacceptable,” he said.