Brexit will not lead to a return of borders and violence 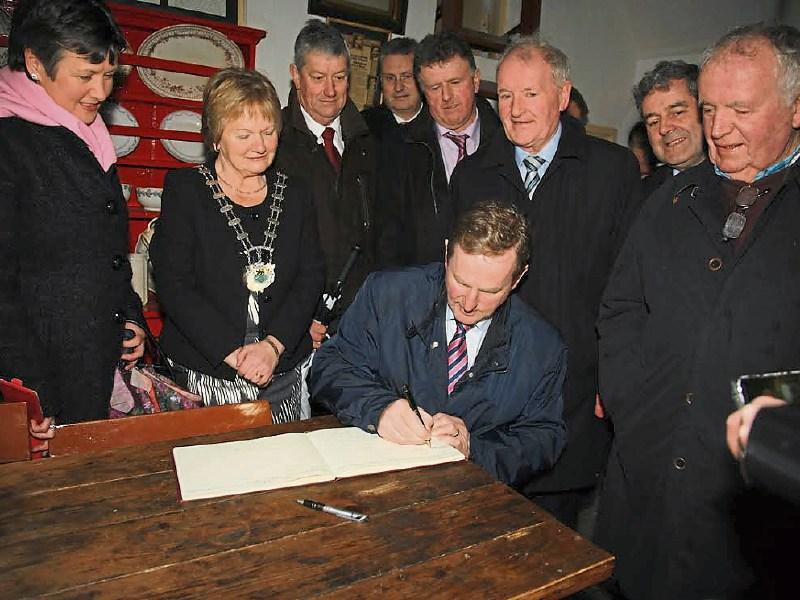 An Taoiseach Enda Kenny visited Kiltyclogher on Friday last where he paid tribute to the village's most famous son, Sean MacDiarmada, and also attempted to address the concerns of many in relation to Brexit.

A visit to MacDiarmada's cottage was followed by a tour of the Kiltyclogher Heritage Centre where he viewed artifacts relating to 1916 and the life of Sean MacDiarmada.

That was followed by a visit to the village's Community Centre where he addressed local representatives and members of the community in relation to a number of issues including Brexit, broadband and the proposed cross-border Greenway that it is hoped will span from Sligo to Blacklion and on as far as Enniskillen.

Explaining the reasons for his visit to the Leitrim Observer, An Taoiseach said, “I committed to Tony McLoughlin some time ago that if I had the opportunity to come to Sean MacDiarmada’s cottage that I would. It has been a privilege to visit the original cottage, to see some of the original items that are still in it but also to hear a very detailed account of Sean MacDiarmada’s life.

“I was struck by the quality of his writing here in his own hand, the night before he was executed.”

Addressing the issue of Brexit which has the potential to significantly impact on Kiltyclogher and other border towns and villages An Taoiseach attempted to alleviate local concerns when he said, “I want to assure them of two things. We are not going back to what I see on the walls here, of roads being blown up, and we are not going back to a situation of custom posts on the border and that’s agreed between our own Government and the British Government.”

Re-emphasising the point that there will be no return to days of old when villages such as Kiltyclogher were synonymous with check-points and road closures An Taoiseach said, “It is a political challenge because the border in the past brought with it sectarian violence and all of those elements of criminality that came along with that.

“Kiltyclogher is now a peaceful village and everybody wants to get on with their lives and we want to work with that for the future. That is essential in the context of negotiating Brexit. Obviously the economy of the Republic and Northern Ireland is of paramount importance to us and given the practical issues that arise everyday across the border these are issues that will be foremost in our priorities in the discussions that we have both with the British Government and as part of the EU negotiating team in the time ahead.”

Following his recent announcement that he will address the issue of his leadership of the Fine Gael party upon his return from a St Patrick's Day meeting with American President Donald Trump, An Taoiseach touched on his visit to America stating, “I hope to work with the American administration in the interests of continuing the participation of Ireland and the United States and the opportunity to provide work and careers for so many people.

“We employ 100,000 Americans from 50 states at the moment. That’s very different to when Sean MacDiarmada’s family emigrated to the United States when we were totally dependent on the remittance sent back from the States at that time.”

During his public address in Kiltyclogher's Community Centre An Taoiseach also referred to the fact that Northern Ireland voted against Brexit and voiced his belief that should a time arise when the majority of citizens north of the border are in favour of a united Ireland then the north should be welcomed back into the EU.

“People voted north and south in 1998 on the Good Friday Agreement. You voted on the basis that this was an international agreement that will be lodged in the United Nations and it is legally binding and overseen by the Irish Government and British Government.

“If at some future time the people of Northern Ireland decide by their vote that they wish to join the Republic that can be so, that is in the Good Friday Agreement. I want to see that when these negotiations are completed that that language is put in there.

“Not just for the reason that people in the North would be able to join the Republic but if they so wished but also in that when Brexit happens and Britain leaves it leaves with Northern Ireland - a part of this island currently in the EU would no longer be in the EU.

“What I want to see happen is that language of the Good Friday Agreement be contained in the result of the negotiations so that if at some stage in the future that happens then Northern Ireland will not have to reapply to join the EU and will not have to wait 20 years to do it but could join seamlessly the way East Germany was assimilated with West Germany after the fall of the Berlin Wall.

“These are serious political issues and they have a dimension that will effect the children here.”