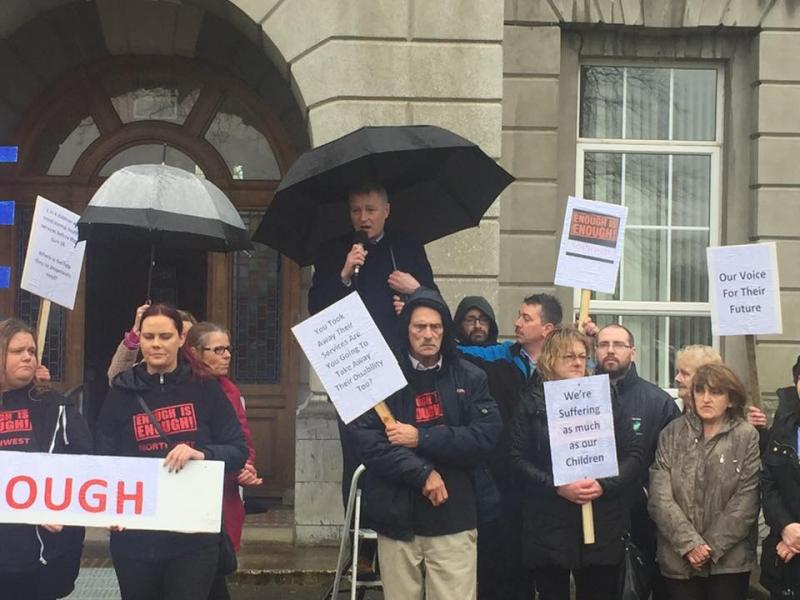 People protesting in Sligo to highlight concerns over the situation facing families of children with special needs in the North West.

At a demonstration in Sligo today, as part of a nationwide action over  lack of services provided by the HSE for children with disabilities, Sinn Féin TD Martin Kenny has said children have been let down by the state.

Deputy Kenny was speaking as over 200 people demonstrated in Sligo in an Enough is Enough protest, demanding better services for their children including early intervention, speech therapy and respite.

Deputy Kenny said: “We have been hearing a lot in recent months about how children were let down in this country in the past, but children and young people are being let down in the here and now too.

“Parents and friends of children and adolescents are here on behalf of their loved ones but also on behalf of the whole community. There is not a family in this area who at some time will find that one of their own relatives or friends will need these services too.

“These children and young people have a right to a service and their carers have a right to respite and services too. It is great to see so many people out supporting this campaign and calling on the Government to provide a full service in the Child and Adolescent Mental Health Service in this area, but it is an awful reflection on the state of the service that people who are already overburdened have to turn out in the pouring rain to appeal to the government.

“This campaign is well named: enough is enough.”