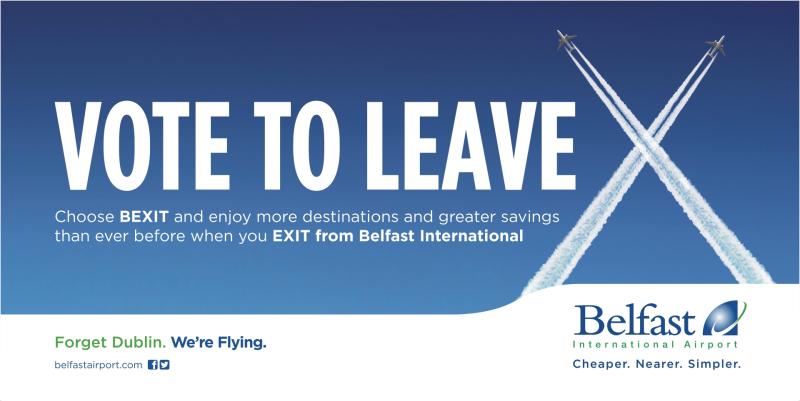 Belfast International Airport is embarking on a major advertising campaign in County Leitrim to persuade passengers to opt for the Northern ‘gateway’ over Dublin.

The billboard, newspaper, radio and digital advertising campaign will have as its strapline ‘Cheaper. Nearer. Simpler’ and builds on the fact that a strong euro offers better value when you fly from Belfast International.

‘Forget Dublin. We’re flying’ is Belfast’s fight-back effort against the larger rival which claimed to attract a significant part of the Northern Ireland market.

Using Brexit, the ads will encourage passengers to ‘Vote to Leave’ via Belfast and ‘Give your euro a break when you turn around and ‘Bexit Belfast International’.

Belfast International Airport Managing Director, Graham Keddie, says there has never been a better time for passengers in County Leitrim to use the International.

Mr Keddie said, “The strength of the euro over the pound gives a distinct and clear advantage to southern passengers.

“We’ve been seeing a noticeable increase in the number of southern-registered cars in our car parks. We fly to 90 destinations in Europe and, at the beginning of July, Norwegian will commence trans-Atlantic services to New York and Providence (Rhode Island/Boston).

“At the other end, you can be through Immigration in under 15 minutes without the congestion of Newark, JFK, Boston or the queues at pre-clearance in Dublin. Nothing could be simpler.

“Savings are appreciable. Convenience, too, is a factor as for many in the southern border region, it’s easier to drive north than south. And our car parking, which can be booked online, is at competitive rates.

“We’re saying to people to select the best option for them. Once they weigh up all the factors, on fares, proximity, car parking and facilities, we know many more will want to opt for us.”

The campaign will run during June and July.