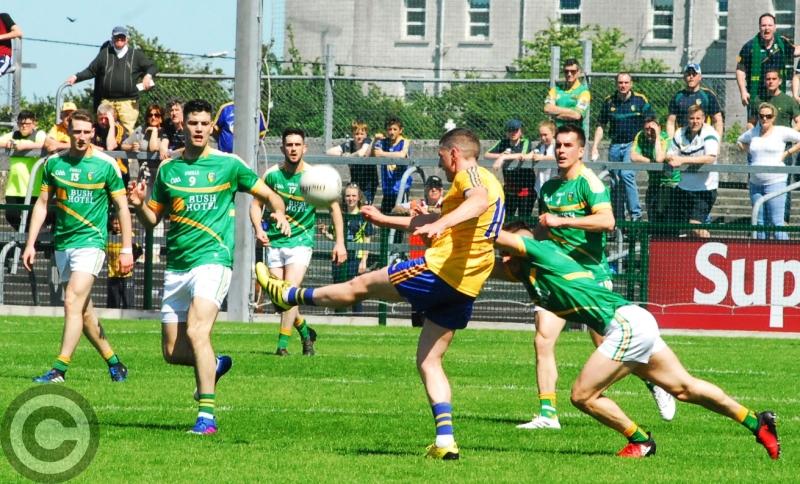 Brian Stack gets his shot away despite a massed Leitrim defence. Photo by Willie Donnellan

Leitrim's record breaking loss to Roscommon in Hyde Park met with a reaction of despair and anger on social media on Sunday.

The 2-23 to 1-9 defeat left Leitrim's players and fans devastated as the hope of a new generation emerging was ruthlessly smashed by Roscommon's own young generation.

And the reaction was naturally downbeat as Carrigallen's Terence Reynolds, brother of Leitrim star Gary, commented on Facebook:

@Woolberto @LeitrimGAA football championship is a joke. Junior intermediate senior needed but I guess all will be well come September

A 2nd tier championship is badly needed. What does this result do for football in #Leitrim? Qualifiers are waste of time and no solution.

Just points up the fact that Leitrim and about 8 other counties cannot compete in provincial championships. Second tier badly needed.

@LeitrimGAA back to the days of getting humiliated .

Michael Creamer was a little more accepting of Leitrim's woes

John Kenny, working for RTE, was scathing in his assessment

When are connacht teams going to get the same air time as other provinces..Roscommon v Leitrim game was left to the end. .a disgrace!

Ronan McGreevy senses that Leitrim's problems run much deeper than whoever is in charge of the Leitrim Senior team:

Leitrim were beaten by 17 points this year by Roscommon; 13 last year. Seems to me the problems go deeper than whoever is in charge.

Darren Beirne, however, feels that answers are needed from the team management

1.Horrible display by leitrim 2day. The most tactically naive team I've ever seen. Whole pitch open when we lost possession. Management have

Finally, if a picture could sum up how Leitrim supporters feel today, this might just be it!