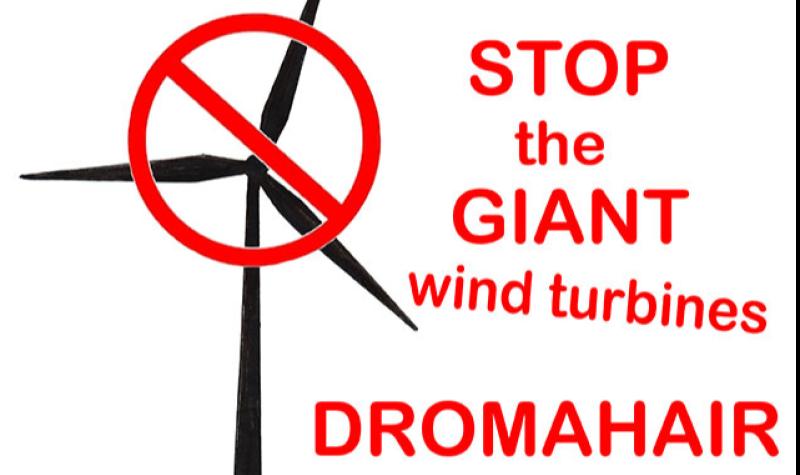 Wind Aware Dromahair’s spokesperson Adrienne Diamond stated that these turbines, if built, will be nearly twice the height of any existing turbine in the Sligo/Leitrim area. They will totally dominate and alter the local landscape and that of the surrounding area to the extent of being clearly visible right across six counties.

Wind Aware Dromahair has gathered widespread support from the potentially impacted villages and towns, including Dromahair, Manorhamilton, Sligo and the vibrant eco-tourism sector in the area, for their opposition to what they describe as “this grossly inappropriate industrial development.”

Over 100 people from the threatened areas attended a public information meeting in September 2019, and unanimously supported the decision to oppose the development.

The group asserts that the proposals presented to Leitrim and Sligo local authorities are the polar opposite of an environmentally appropriate, community-based, sustainable project and are an exploitation of the precious rural landscape and peaceful environment that brings so many visitors to Lovely Leitrim and Sligo.

Adrienne said, “The threatened area is home to several endangered avian and mammalian species including the Annex 1 listed hen harrier and corncrake as well as several species of bats.”

Adrienne continued, “How can the destruction of native bog and its replacement by thousands of tons of concrete and steel be regarded as being environmentally friendly?

“Undisturbed and undrained bog is now universally recognised as a vitally important carbon storage reservoir. Furthermore, this landscape, like Shaas Mountain where a massive mudslide occurred as recently as in June this year, is highly vulnerable to landslides. causing huge environmental degradation, pollution and extermination of aquatic life in the many surrounding rivers and streams.”

“We want a green future for Leitrim and Sligo by continuing to cut carbon emissions and by leading the way with imaginative, sustainable, small scale renewable projects that are suited to our sensitive beautiful landscape and truly create local employment.

“Our small rural community is taking on a giant. We are challenging Coillte, the supposed leaders of the wind energy industry in Ireland. We are fighting to save our health, our homes, our way of life and what remains of our irreplaceable beautiful landscape. This is a local issue, a national issue, and above all it is an ethical issue,” she said.

Wind Aware Dromahair are urging citizens right across the land, as well as rural community groups to join their campaign and submit their strong objection to Coillte’s planning application prior to the deadline of September 1, 2020.