Family of five rescued from cruiser on fire in Lough Derg 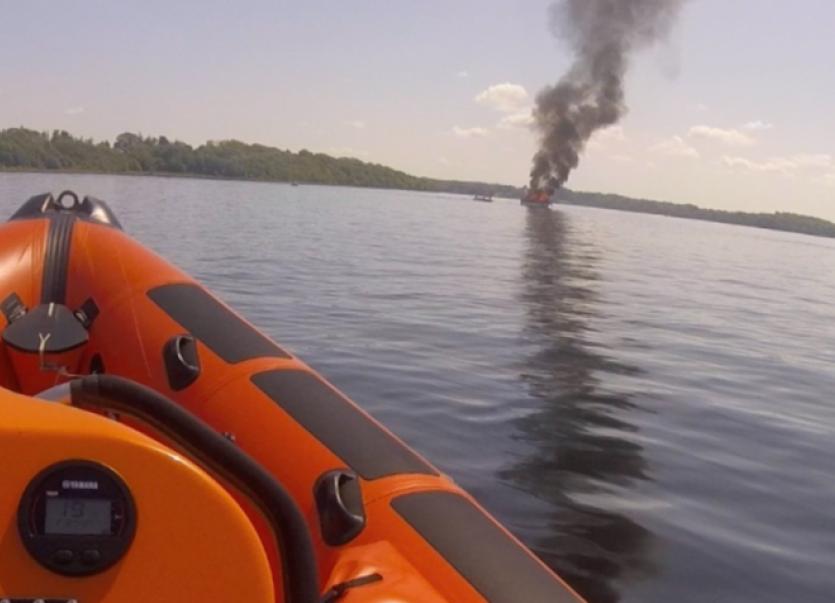 Lough Derg RNLI on route to the cruiser on fire

LOUGH Derg RNLI was launched to assist a family of five onboard a cruiser on fire following a Mayday call on Sunday.

Valentia Coast Guard requested Lough Derg RNLI lifeboat to help those on board a 38ft cruiser on fire, by Castle Harbour, Portumna, at the most northern end of Lough Derg.

When the lifeboat crew assembled at the station they were informed by Valentia Coast Guard that three people had been safely evacuated from the vessel.

At 12.16pm the lifeboat Jean Spier launched with helm Keith Brennan, crew Eleanor Hooker, Joe O’Donoghue and Doireann Kennedy on board. The lake was calm and visibility was excellent.

Aoife Kennedy, Lough Derg RNLI Deputy Launching Authority, relayed information from Valentia Coast Guard that the remaining two people had been safely evacuated from the burning vessel. Valentia Coast Guard contacted the lifeboat to request that volunteers check the wellbeing of the casualties.

The lifeboat arrived on scene at 12.35pm. The fire on the casualty vessel had taken hold and fire firefighters from Portumna Fire Service were working to extinguish the fire. All five casualties were safe and unharmed and were being attended to by ambulance crew at Castle Harbour.

As there was significant risk to the many boat users close by with fuel onboard the vessel, Valentia Coast Guard requested Lough Derg RNLI lifeboat and the Killaloe Coast Guard boat to monitor the scene and request that all vessels maintain a safe distance.

At 1.30pm, fire fighters had managed to put out the main fire, however the vessel was still smouldering and billowing smoke. The anchor line had burned and the vessel was now drifting into a main navigation channel.

At 2.14pm, the casualty vessel was relocated to Carrigahorig Bay, where fire fighters continued to pump water and foam to ensure the fire was fully out.

Valentia Coast Guard thanked Lough Derg RNLI and the Killaloe Coast Guard boat, and both were stood down.

Aoife Kennedy, Deputy Launching Authority at Lough Derg RNLI, advises water users to "always be alert to the dangers of fire on a boat and always carry a mean of communication so that you can call the emergency services for help"