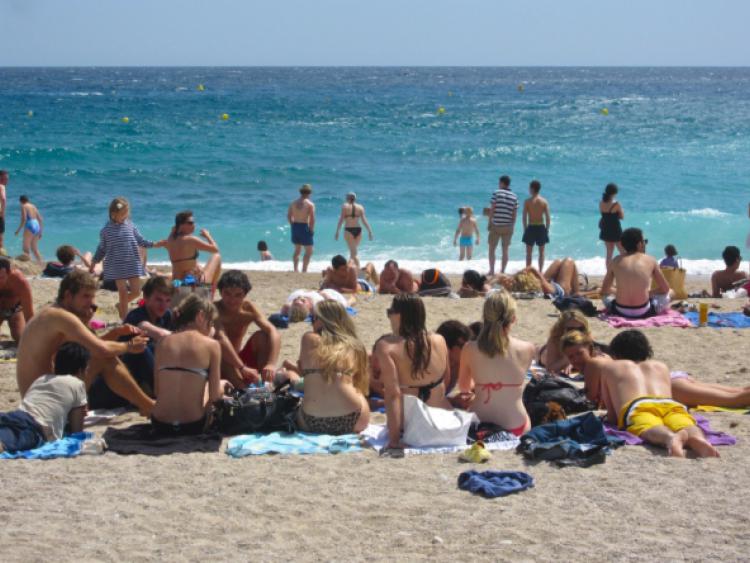 On a recent trip to a mirror, a destination I normally avoid for obvious reasons, I met a very forlorn looking gent looking back in my direction. Granted he was a good bit older and plumper than myself, yet he seemed to take a great interest in what was before him, he looked me up and down and then with a certain sneer of distain, he turned and walked away… and I couldn’t blame him, because like me, perhaps he was expecting to see something a little more uplifting… or at least, see a little more of what hadn’t fallen or sagged or drooped. It turns out he was heading off on the summer holidays with his sun loving family and had gone to that same mirror for some kind of reassurance… Sorry dude, but it’s your Speedos need the reassurance and perhaps a little reinforcement if truth be told.

On a recent trip to a mirror, a destination I normally avoid for obvious reasons, I met a very forlorn looking gent looking back in my direction. Granted he was a good bit older and plumper than myself, yet he seemed to take a great interest in what was before him, he looked me up and down and then with a certain sneer of distain, he turned and walked away… and I couldn’t blame him, because like me, perhaps he was expecting to see something a little more uplifting… or at least, see a little more of what hadn’t fallen or sagged or drooped. It turns out he was heading off on the summer holidays with his sun loving family and had gone to that same mirror for some kind of reassurance… Sorry dude, but it’s your Speedos need the reassurance and perhaps a little reinforcement if truth be told.

And I totally understand this man’s forlorn outlook. The fact is, we Irish were never meant to go on sun holidays, at least not to anywhere sunny. Surely we must give God some credit for having the where-with-all to put the people who don’t react well to sun… into wet, cloudy, dark countries like Ireland. And I know the Dubs love the sun, but that’s just because each one of them thinks it shines out of somewhere just below their own bikini line.

The fact of the matter is we in the country should be more than content with a trip to Bundoran, Rosses Point or Salthill… somewhere away from the sun, somewhere where we can get chips and The Sunday Game, somewhere we can get home quick in the case of an emergency… like a cow in a drain or a football replay or the Blessing of the Graves.

The fact is… I hate Sun holidays and I mean the ones abroad, because on these same holidays, one is expected to do all the things that one would avoid at home… reading, swimming, pretending to be interested in walking around aimlessly and most of all, parading certain parts of your body that should, under no circumstances be seen by anyone other than those with proper medical training or a background in wild hog hunting.

Also the sight of an Irishman in a pair of Bermuda shorts, brown socks and good Sunday-going-to-mass-black-lace-up-shoes, sitting near the shallow end of a Spanish swimming pool, can often spark off negative reactions… the off-white hanky on his head coupled with the over load of sun cream on his ears and nose, suggests to me that perhaps he is indeed in the wrong country.

In the 70’s and just after 4.5 billion Irish Summers, when our rural Irish population had only just acclimatised to three sunny days per year in the bog… Someone by the name of Joe Walsh or Joe Soap decided that we needed to get a bit more sand instead of peat between our cheeks, and so the sun holiday was born… and it is no coincidence that this milestone coincided with the advent of coffee, red wine and disco music being brought into this country… something our forefathers never forgave us for and as my own father would say, ‘It never done much for bringing home the turf’… and speaking of ‘The bringing home the turf’, and before that ritual is swiped from under our noses altogether, or should I say made to stay beneath our feet… Is a family outing to the bog not a more binding, rewarding and overall more warming exercise than an ‘all you can eat’, ‘all you can drink’, all you can blow’ summer sun holiday?

If the Gathering was designed to bring people back to this ‘fair to middling’ Isle of ours… Well I propose that those of us who are already here, stay here and I don’t mean stay in the house flicking from one piece of crap television to another, there’s enough of that going on as it is. No, I mean using the place where we live as a holiday destination, at least for a week or two and think of the savings- No travel, no Airport parking, no taking off your belt or shoes at security checks, no popping ears, no jetlag, no hotels, no ‘Are we there yet?’, no driving on the right side of the road in the wrong country or the other way around, no missing of major sporting events and most of all, no sunburn, sun poison, heat rash or scalds and most of all, and especially these weeks, no missing ‘Observer Day’.

And what is there to do, if we stay in the country, the region? Well I would hope if we’ve just spent millions of euros telling the world what we have to offer in this country during this summer of all summers, I think… I hope I can safely say there is more than there has ever been before and thankfully in most places, that also includes going to the bog, if you so wish. The thing is and as they say, this is probably the best kept secret in the world, but the only thing not lovely about Leitrim is that bloody song and that come to think of it, would be a great reason for another festival, a song writing festival… to choose a new anthem for this wee county of ours… only rule- Phil Coulter need not apply.

And what about all these festivals around the region? Everything from yoga to leaping on one leg… or is that the same thing. Christy Moore would have a field day… and we’re blessed with our outdoor activity’s… there’s ploughing and walking and that bloody swimming and fishing and golfing and hunting, horse riding and then proper sports like football and cycling-for-no-reason and handball and boating and walking on water.. for those who can do it… It’s very popular around me, although I haven’t witnessed it at first hand, hopefully the water will be at a higher level when that season recommences.

We’ve got music too, of course and bluegrass and no grass and lots of grass and cut grass and other grass and I don’t know what the farmers are talking about, they should be the most contented men in the country. Anyway to finish my tourism rant… You can appear at a shrine or disappear down a mine… and now who thinks he’s Christy Moore…

No, we can’t guarantee sunshine in these here parts, but we can guarantee a certain type of warmth and the use of a small mini-digger if ya happen to get her bogged to the axles. We can’t guarantee a suntan, but you’ll probably end up spraying it on anyway… you could sit in a bog-hole, although the all-over version of that tan is apparently deemed a little dangerous.

And as Michael Jackson would say, what about the man in the mirror? Well it turns out he didn’t go on a sun holiday, he was never meant to go, he was just checking as we all do from time to time on the specular demise of his youth… no wonder he looked so forlorn.

Rumour has it, that in an attempt to halt or at least slowdown that demise, he has taken to walking and riding his bike… riding his bike for a very good reason… so that he can hang around for another while in the place where the Shannon water flows… Oh here we go again!!

Seamus O’Rourke is the guest columnist for the Leitrim Observer in the absence of Ocean FM’s Kevin Blessing who recently got married. Seamus is an award winning playwright who presently has two1 shows on the road ‘Stalemate’ and The Sand Park’