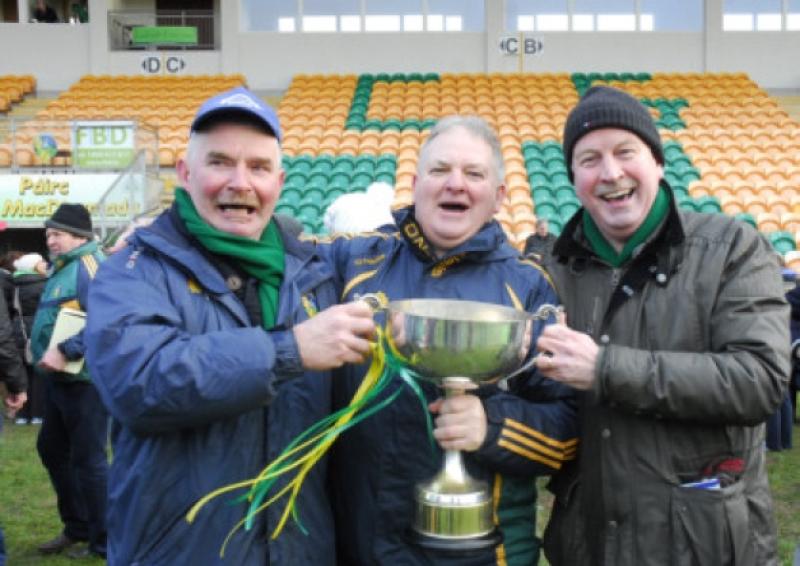 It was lovely to see so many Leitrim people with smiles on their faces as the sun came out over Pairc Sean during the presentation of the FBD Cup to Emlyn Mulligan.

It was lovely to see so many Leitrim people with smiles on their faces as the sun came out over Pairc Sean during the presentation of the FBD Cup to Emlyn Mulligan.

We’re a happy, amicable people naturally and all that fussin’ and a feudin’ from last year was well and truly shelved thanks to a squad performance that is indicative of what a unified front can offer. Our superior energy and desire shone throughout and while Roscommon’s prolifigacy contributed to their defeat, it was Leitrim’s superior football that won this game.

We started strong, flagged a little either side of half time, then rallied very well in the final stages to seal the win, even if Niall Daly’s late goal left the result in the balance a little longer than necessary.

It was a bitterly cold day but the Leitrim performance warmed the cockles of the home supporters from the very throw in. The game was won during a wonderful first half performance.

We hit the ground running – literally. The strength on the ball displayed by some of the Leitrim lads in the first half was outstanding. We were willing and able to take on the Rossies and we broke their lines when running from deep time and again.

Two instances stood out. At one stage Kevin Conlon, who played the sweeping role across our half-back line beautifully, looked out numbered and running down a blind alley around the half-way line in front of the old stand. Support was slow in coming and he looked likely to be dispossessed by three Roscommon men that had him surrounded.

However, his ability to withstand two strong tackles followed by an injection of pace at just the right time saw him break into open space and set up a Leitrim attack.

Secondly, when an under pressure Emlyn Mulligan slipped a ball to Wayne McKeon, who was well covered by two defenders, there seemed little hope of a score. McKeon stepped into the tackle and shook it off before landing his second excellent point of the game and a really important last score of the half.

The other gem of the first half was Mulligan’s pass into Ray Cox – it was slipped through the eye of a needle and put the lively Annaduff man in for a goal shooting opportunity. The pair repeated the double act to perfection again in the second half for Cox to point.

The Roscommon ‘keeper saved the goal-bound effort but Aaron Hickey played the percentages game and followed in to bury the breaking ball to the back of the net. The easy option would have been for Hickey to hold his run and save his energy for the midfield duties. He took the hard option and it paid off.

Things didn’t all go our way but how we responded to any setbacks was encouraging. Paul Brennan’s black card was unfortunate and you could call it harsh but that is now the reality. A deliberate pull is a black card offence.

A little more consistency in that interpretation of the rule would have been appreciated but the referee had a good game overall and just like the rest of us he’s getting used to the new landscape too. Brennan’s removal allowed Roscommon get a better grip on the game for 10 minutes before half time, but as the game flowed inevitably on the half back line got its rhythm back again. Rob Lowe’s injury robbed us of a valuable outlet into attack especially with Conlon spending more time on or behind the ball as we broke and this is an area we will always have to be conscious when playing some of our forwards deep in defence.

Another potential problem area this tactic brings is the matter of who picks up the opposition’s free defender. Roscommon’s centre back finished with 1-2 while their full back scored a hand-passed point in the first half. It requires great communication and work-rate to ensure five forwards can cover six defenders, but that is something the lads will be working on in training as I expect Sean Hagan will continue to use this approach (particularly against the wind) as his players enjoy the running game it encourages.

It would be remiss not to give a word to our full back line, or two in fact: Well done. Roscommon’s full forward line was their prize weapon and while they looked dangerous in the first ten minutes, once Paddy Maguire, Donal Wrynn and Barry Prior got to grips with them the threat was snubbed out.

A final word to John Mulligan: what a great way to make your Leitrim debut. I hope you cherish that match-winning goal and produce many more like it in the years to come.

I hope to see lots of you at the Leitrim Supporters Club launch in Croke Park on Thursday. If you know anyone from the old country living in the city or surrounding counties then please let them know about it and encourage them to come along. We are anticipating a long year ahead and fundraising events like this are essential. Besides that, it’ll be a great night. Roll on Antrim.