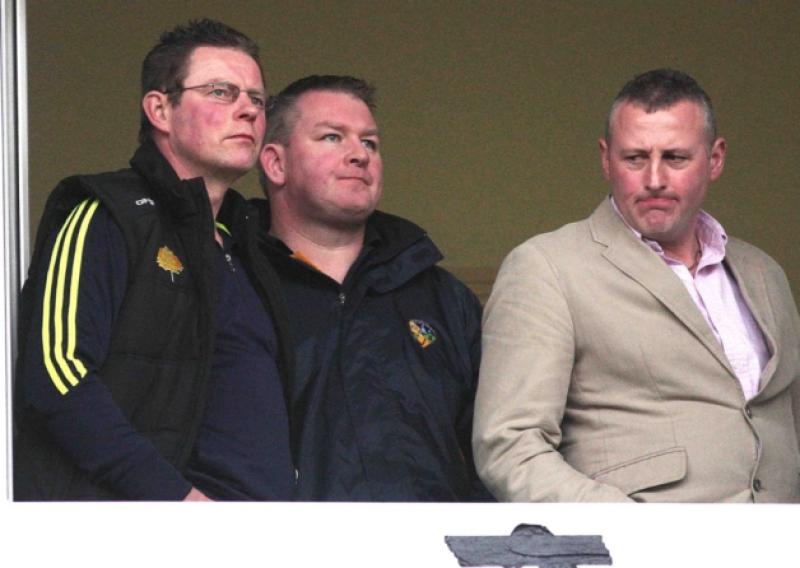 After the first few games of this season’s NFL we had high hopes that our seniors could push for promotion from Division 4. A great start against Antrim in Pairc Sean was followed up by what was assumed could be a telling point away against Clare.

After the first few games of this season’s NFL we had high hopes that our seniors could push for promotion from Division 4. A great start against Antrim in Pairc Sean was followed up by what was assumed could be a telling point away against Clare.

The victory in Aughrim against Wicklow seemed to suggest this panel had the strength in depth to come through the final three matches with enough points to claim a place in the Division 4 final. Much was made of the defeat in Waterford, but as the final league table now sits had we won that game we still wouldn’t have gained promotion. Such is the competitive nature of league football in division four.

Sean Hagan and his management crew have advanced this panel. When Sean said he would do everything in his power to win promotion this year I believed him and hoped their collective efforts would reap such rewards.

It was not to be, but I believe there is a foundation now in place from which every subsequent action taken by this group must be taken.

All efforts must now be furthered and increased – to do anything less would be to take a step backwards. Believe me there are no more disappointed people out there than the players themselves. They wanted promotion. They put in enormous amounts of work and made countless sacrifices.

But they fell short. There must now be a review of why that goal wasn’t achieved, and all necessary steps must be identified to ensure they achieve the high standards they have set themselves.

To act otherwise would be to accept that we don’t have good enough players to advance from Division 4. That simply isn’t the case. We proved ourselves capable of going toe-to-toe with Clare – one of the teams that eventually won promotion – on their home patch.

We proved ourselves capable of making the long trip to Aughrim and tearing Wicklow apart – a team who subsequently defeated Tipperary in their last league game. The issue, therefore, is clearly not one of ability but of consistency.

Consistency in sport comes from two sources. Primarily it comes from the consistency displayed in every aspect of training – from turning up early and attending every session, to treating each element of what you do in training with the respect and focus it deserves while always seeing its application in match day situations. Once such foundations are in place you begin to stress test your capacities by trying to maintain that consistency in training situations that reach match-level intensities.

This is a challenge and one that must be met by every player. Only then can you finally bring all this to the field in a competitive game, and then the process starts all over again.

From here the second source of consistency can develop. When you successfully transfer all that learning from your training into a match-day performance you place yourself in a position to win a game. The ultimate challenge is to make winning a habit. We’re not there yet but we can get there. By consistently winning you create belief, and that is the most important source all athletes need to tap into.

The very same goes for our U21s. Their performance against Galway was a case in point. They brought a game plan that they worked and worked on in training to reality against the reigning All Ireland champions and won as a result. They fought valiantly against a superior opposition on Saturday – there is no shame in that.

On the contrary, there is much hope to be taken from the promising performances this group of young footballers have amassed in 2014. The same goes for our minors, our hurlers, our ladies. And hope is a precursor to belief.

Coming from Leitrim you need to amass a deep reserve of hope in order to maintain your belief that each year brings with it renewed potential.

Some of you may argue that we shouldn’t get our hopes up too often. But it is hope that keeps us going in more important aspects of our lives than just the realm of sport. And just as with any other quality, hope does not come easily unless you sow the seeds of belief regularly, nurture them with optimism and dose them frequently with showers of faith.

By doing, when life throws at you the sort of experience that really requires hope, you may find a healthy reserve of it to turn to when most needed.

So don’t question yourself for hoping year upon year that this could be the one – be grateful that we have young Leitrim men and women across all codes that are willing to step up to the plate and put themselves out there in order to generate in us that flicker of hope that no one can extinguish but ourselves.