Under siege by a bird-brained casanova 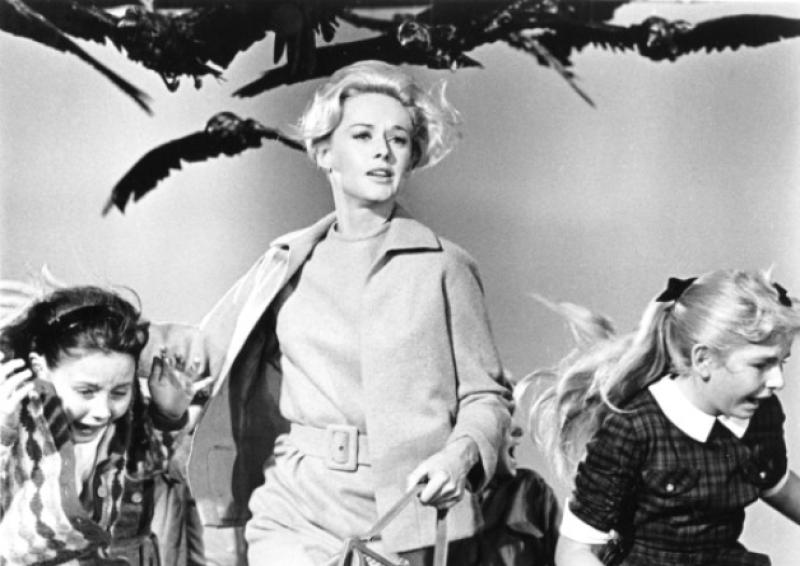 Considering my history of ill-thought out purchases with oversized lounge suites and the like, I probably don’t have a lot of credibility here but I genuinely thought my last purchase was a winner. I mean, how much trouble can a bird feeder bring? And it was just €5 - a total bargain!

I thought I was doing a good turn for the starving wild birds and they, in turn, would bring ‘life and colour to my garden’. It’s all good karma, feng shui or something like that.

Well I’ve got news for you, birdie karma sucks.

To be fair, all was sunshine and roses until the arrival of a black and white unibomber I’ve nicknamed ‘Psycho’ just before Christmas.

Psycho may look all cute and helpless but he’s taken some sort of obsession with glass and our home is his primary target.

The first time he dive bombed our living room window I nearly had a heart attack. Then I panicked that the ‘poor birdie’ must be just disorientated. 10 minutes of him knocking himself senseless on the glass and it became really obvious that there was something really astray with this featherbrain.

Since then he’s escalated his campaign of attack to include every window on our house - including the porch doors - and Psycho has become public enemy number 1.

It probably wouldn’t be anything more than a slightly disturbing hobby except that every time Psycho hits a window he literally poops himself. Multiply the amount of poop by the amount of times he’s connecting with the glass and you’ve got a lot of poop - and it’s everywhere.

Who knew such a small animal could generate that much waste? Really, it probably is some sort or record. Maybe I should be ringing David Attenborough and telling him I’ve discovered a bird who has the pooping capacity of a elephant? - he’s like a freak of nature - Psycho, not Attenborough.

Our home now looks like we’ve become a roost for a flock of thousands of sparrows. If this doesn’t stop we’ll be ankle deep in poop before Easter.

You know that movie ‘The Birds’ by Alfred Hitchcock? The one where birds turn into homicidal maniacs and take out a town? Well I’m starting to believe that Psycho may just be the advance scout for an impending Armageddon bird army. Trust me, none of you will be laughing when the rest of his birdie family turn up.

And it’s all because of that bloody feeder.

Time seems to have no relevance for Psycho and he’ll happily spend hours attacking the same window.

Really you have to admire his single minded dedication. Early morning starts are obligatory - just ask the guests we had staying over Christmas. You want a unique way to greet the dawn? How about the experience of having a small bird thump itself repeatedly on your bedroom window? It’s like the alarm clock with no snooze button. Psycho is up, everyone is up.

Plus there’s the added bonus of Psycho’s impact on the rest of the animal kingdom - namely my dog Rascal.

Rascal is not the brightest of dogs but he certainly can be vocal when he wants to be and he’s really, really vocal about Psycho.

I’m not sure whether he’s barking encouragement or barking abuse at our feathered bully, but Rascal has become the Ever-Ready battery dog of noise making. They’ve formed a twisted sort of partnership. Psycho attacks the windows, Rascal barks. Psycho poops, Rascal barks. Psycho flys past, Rascal barks. It’s hours of fun for everyone. None of the neighbours have complained yet, but really, they probably should. I’d like to say I’m sorry, really, really sorry but I’ve tried everything and Psycho is unstoppable.

In desperation I’ve taken to google to try and figure out a way to stop the dive bombing - not least of all because it’s no fun having to get into a poop covered car. Yeah, Psycho doesn’t like my car windows either.

It turns out Psycho is a territorial male who sees his own reflection and thinks it’s another male trying to muscle in on his territory. So he’s hormonal and stupid. What a great combination.

And the great news is that it’s all because I introduced an excellent food source - yep, the feeder - making my home a territory worth defending. Yay me - chalk up another brilliant purchase for the McKiernan household. At this rate my husband will completely ban me from ever shopping by myself again.

Psycho has declared war and in this battle of bird v my family I’ve now been forced to take evasive action.

As a result my home is taking on the appearance of an abandoned squat. I’m taping shopping bags to windows - it’s decorating a la Aldi, something tells me it’s a trend which isn’t going to take off, but I will try anything that stops Psycho from seeing his reflection.

I’ve quit feeding the birds too, the robins were a little ticked off about that, but Psycho hasn’t twigged it yet.

If this doesn’t quit soon I’ll be tempted to borrow my mother-in-laws new kitten to see if that’ll convince him to, well, sod off somewhere else.

The good news is that he’ll probably give up in another few weeks, unless he finds himself a mate and they build a nest and create a new generation of super window-fixated dive-bombers.