Learning something about home many miles away 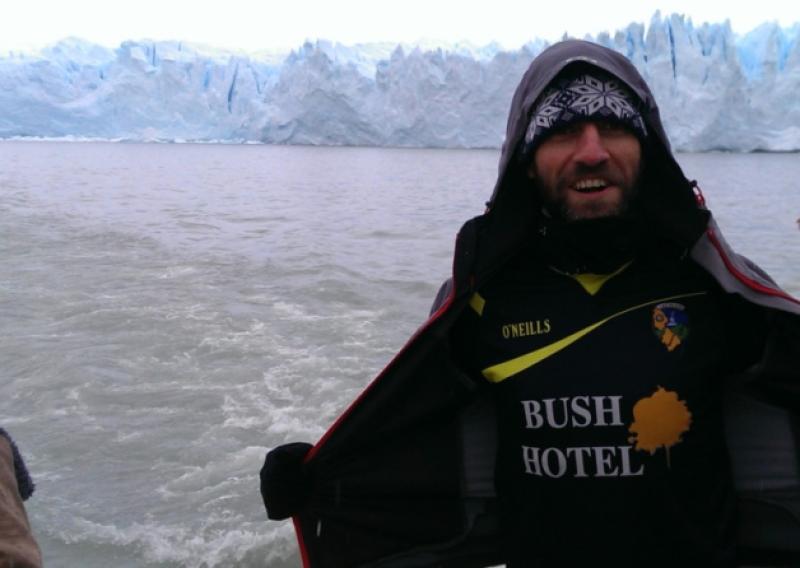 If Leitrim is God’s country then Patagonia is where she takes her holidays. And yes, if there is an all knowing, compassionate, vengeful God out there I reckon someone who possesses all those qualities must be a woman.

If Leitrim is God’s country then Patagonia is where she takes her holidays. And yes, if there is an all knowing, compassionate, vengeful God out there I reckon someone who possesses all those qualities must be a woman.

I’m writing this dispatch on my phone from El Chaltén, the hiking capital of this beautiful part of Argentina. It’s been a lifelong ambition to visit Patagonia but not just to see the famed countryside, but to get into it and experience it, and that’s exactly what I did today.

We’re in the height of winter in southern Argentina right now and we had about a foot of snow over the past few days. The bus from El Calafate took to the roads nonetheless and while it was hairy in places, we made the scheduled three hour journey in just over four and a half.

The scenery between these two small towns in the Santa Cruz province would be impressive at any time of the year but the coating of snow seemed to add another dimension to the sheer scope of the vistas we encountered on every turn.

Famed for its glaciers, two of which I have been lucky enough to see, this region has allowed me a better understanding of my familiar surroundings back home and of how the very landscape of north Leitrim was moulded. Isn’t it often the way that the further you travel from home the better you get to know it?

Many of the mountains are reminiscent of the Sligo Leitrim range, and some of the valleys are not unlike our very own Glenade. It’s just that they are on a different scale, and they continue forever before leading you into the cascading range of precipitous peaks surrounding the Rio de los Vueltas.

The snow-covering accentuated the contours etched by the receding glaciers into the side of the valley’s mountains so many moons ago and in my mind eye I could see the same geographical phenomenon occurring in Glenade and the Horseshoe valleys about 300 million years ago too. It offered a great insight into the landscape of my homeland.

There were similarities and differences in many other aspects there and at home too. If you have traveled in South East Asia you will probably have come across a favored local saying that goes ‘same same but different’. It’s used in 101 different scenarios and basically means yes its the same, but different also.

The ranches that lined the valley put me in mind of home despite the Alpacas that roamed them so freely. There were no shortage of cattle or sheep either while ranches covering 20,000 hectares would be nothing unusual (that’s right, approximately 50,000 acres). Not a Massie Ferguson in sight mind you.

The gouchos (cowboys) who man the ranches still prefer single horse power though I definitely saw evidence of some quad tracks here and there. But back to the point of my story (I promise you there is one.)

Chaltén is located within the Los Glaciares National Park at the base of Cerro Torre and Cerro Fitz Roy mountains, famed throughout the world amongst climbers. It’s a small, select group of highly skilled individuals who could tackle either peaks.

The reason the town has grown and become part of the tourist trail for visitors from all across the globe is more simple and populist - it offers nature lovers of varying capacities and capabilities to opportunity to get out into the great outdoors and witness and experience all the benefits associated with being party to the natural world’s wonders.

Due to the weather at this time of the year it is a virtual ghost town bar a few freaks like ourselves who will brave a foot’s snowfall to see any special new part of the world.

We hiked to near the base of Fitz Roy mountain and encountered only a handful of other people, three of whom were from Austria, four from from France, a group from America, one from England and one from Bangor (there had to be one other Irish person didn’t there).

The town is made up entirely of tourism related entrepreneurs and enterprises and during high season is booked out week on week. It has no other industry. Without tourism there would be no town. The trails are excellently maintained and marked and even in the depth of snow, we encountered a Park Rangers out ensuring they remained that way for the few hikers that were taking to the mountains.

Throughout my time here I have been thinking of the potential Leitrim has to market and sell itself as a place of great untouched natural beauty. We may not have any glaciers but we have one of the best examples of a glaciated valley in Europe. The hike I did today was stunning, but no more so than many I have done in our county. Just different. The ‘same, same, but different’, so to speak.

The Leitrim Recreational Forum has started exploring this potential but this needs to be taken onboard by every element of the county. The potential is enormous. The scenery and landscape and natural resources are already there.

All we need is the vision and collective impetus. Let’s make it happen sooner rather than later and save me another15,000km journey.