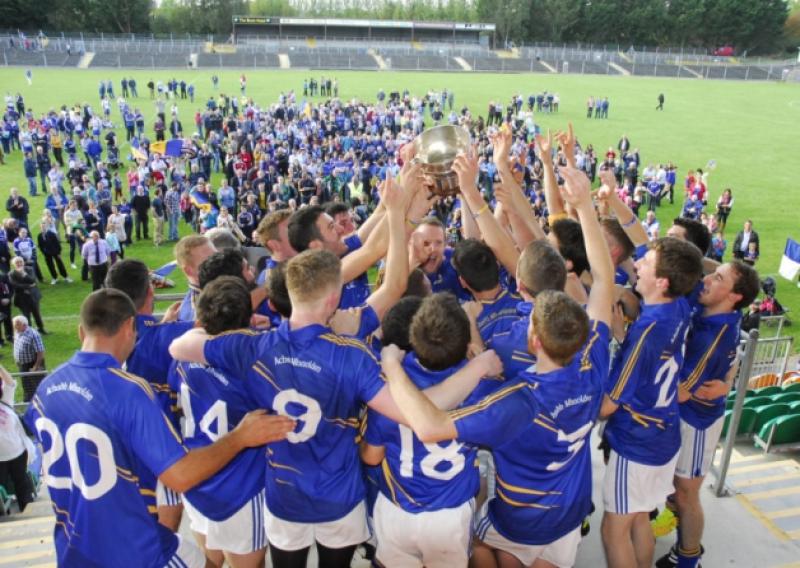 Having returned to the blue and white of Melvin Gaels for past few games I have been able to assess some of the teams who will be fancying their chances in the senior and intermediate championships of 2015.

Having returned to the blue and white of Melvin Gaels for past few games I have been able to assess some of the teams who will be fancying their chances in the senior and intermediate championships of 2015.

On Saturday I travelled from Dublin in the stifling heat and through thunderous rain showers to reach Carrick for a Division One league game against St. Mary’s, our game against Mohill having been postponed at very late notice but more on that later.

St. Mary’s started the league slowly but have been getting up to speed in recent games moving up the league standings with a series of wins. Despite having a penalty saved in the first half, they showed more composure than us to close out a deserved two-point win, 1-11 to 1-9.

Their movement caused us problems in the first half as we struggled to come to terms with the very wide dimensions of the St. Mary’s pitch. The second half was a nip and tuck episode but our profligacy cost us in the end as the Carrick men proved more accurate in the vital final ten minutes. The game offered learning opportunities for both teams.

St. Mary’s might not be the side they were a few years ago but that goes for a lot of teams in Leitrim right now, ourselves included.

Just a word of congratulations to Seamus Quinn on his refereeing of the game. He was excellent from start to finish and his ability to cover ground meant he was invariable in a good position to make the key calls; even if you didn’t feel he got everyone of them right you were willing to give him the benefit of the doubt! It would be great to see other former county players take up the challenge. You just can’t beat their ability to read a game and to appreciate a players’ perspective in their calling of common-sense decisions.

St. Mary’s opening game is against Dromahair in Ballinamore on Saturday evening. The pitch will suit St. Mary’s tactics (if they play as they did against us) but Dromahair have been moving well and currently sit one place and two points above the Carrick side in Division One with a much healthier scoring average.

Dromahair drew with us in Kinlough and I was impressed with their never say die attitude, coming back into a game that looked lost to them to equalise at the death. With Annaduff and Gortletteragh, the other two teams in Group 1, out in Pairc Sean on Sunday a win will put any team in the driving position going into round two. We defeated Gortletteragh easily in Kinlough but they were down a few key players and have much better in them. I haven’t seen Annaduff play in a few years so can’t comment on their chances.

Manorhamilton remain the favourites to win the title despite Aughawillan being the reigning champions, I’m sure that very sentence will be used as motivation in McGahern country. Our neighbours sit on top of Division 1 although Mohill have a game in hand and are only one point behind.

We drew with a depleted Manor side in Kinlough a few weeks back and while they aren’t quite the side they were a few years ago either, they still have more experience and a stronger panel than any other side in the county. They participate in the first senior championship game of 2015 as they face Bornacoola on Friday.

Group 2 also contains the reigning champions and Carrigallen so expect a few very one-sided games, one absolute cracker and a dog fight between the Bors & Carrigallen.

Mohill are flying in the league. I was really looking forward to the opportunity to play in Philly McGuinness Park on Saturday for the first time but the game was postponed at a very late stage, something to do with a Division 3 encounter they had on Sunday I was told but I don’t have official verification of that. I hope I get the chance to play on that field sometime before I finally put the boots away for good. It would mean a lot to me.

The most enjoyable game I have played since my return, purely from a footballing perspective, was the game against Ballinamore Sean O’Heslin’s in Cloone. It featured two teams going toe to toe and included some fine points (Shane Moran and Johnny Connolly with a couple apiece) from both sides with two cracking goals.

Ollie Honeyman’s side got a man dismissed in the second half and that probably proved the difference between the two teams in a game that could have gone either way. I expect they will be the team to beat in the Intermediate championship as they attempt to atone for their final loss in 2014.

I haven’t seen Leitrim Gaels in action but look forward to that opportunity as their recent progress has been eye-catching. Best of luck to all the teams involved in all competitions.