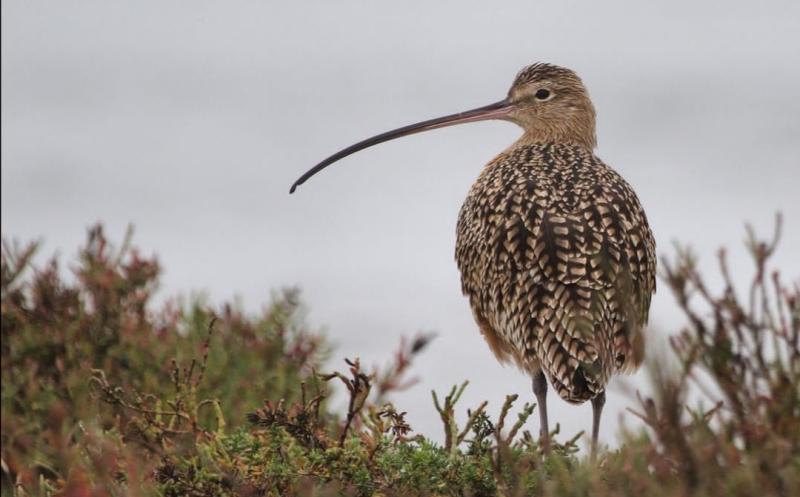 The Minister of State with responsibility for the National Parks and Wildlife Service (NPWS) Malcolm Noonan described the current status of the Curlew as “one of the most difficult and pressing conservation concerns of our time”. “The Curlew is a link with the wild Ireland of past generations, and the farmers and landowners who support our remaining breeding populations of Curlew are vital to its future,” he said.

Curlew are beautiful birds that have played a significant role in Ireland's heritage being represented in placenames, storytelling, poetry, music, coinage and folk lore. They are a large wader with greyish brown colouring with dark streaking standing tall on long bluish legs with a majestic long down curved bill, their call is evocative and easily recognisable.

Concerns have been growing about the Curlew’s survival – in the late 1980s, between 3,300 and 5,500 pairs were estimated to have been breeding – today that is believed to be no more than 150. This represents a decline of at least 96 per cent. This decline is due to multifaceted

pressures such as changing land use and agricultural practices, afforestation, land fragmentation, industrial peat harvesting, a decline in invertebrates and predation. In 2016, wader bird ecologist Dr. Alan Lauder calculated that without action, the species could die out by 2026.

The Curlew Conservation Programme (CCP) was established in 2017 by the National Parks & Wildlife Service (NPWS). It is now a partnership programme involving both the NPWS (of the Department of Housing, Local Government & Heritage) and the Department of Agriculture, Food & the Marine. This conservation work is deemed essential even under level five lockdown because Ireland's breeding Curlew are in desperate need of protection if they are to be saved from extinction.

Within the framework and structure of the CCP, there is an emphasis on local – with local teams engaging with local landowners and communities to apply relevant measures at a local level. These Curlew Action Teams (CATs) search out and protect nesting areas and, critically, engage with landowners and local communities on their importance to the survival of Ireland's Curlew. The mid-Leitrim area is one of the nine sites across Ireland where there is active conservation effort underway by the Curlew Conservation Programme. Anyone who would like to make contact with the team are encouraged to contact Kyle Sweeney by phoning 087 721 8006. On facebook @curlew conservation Programme

Given this year also sees a national survey underway, records of Curlew anywhere in Ireland between the months of April and July should be reported to Agri.Ecology@chg.gov.ie