Tightening of supply: No new homes being built resulting in a lack of supply for buyers The property market is an ever changing sector, continuously going through many ups and downs. We have gone from the halcyon days of the Celtic Tiger to the fallout resulting in ghost estates to the present time where prices are far exceeding their asking price but with very limited supply.
The last year however, with the Covid-19 pandemic and its ensuing results, has seen an unprecedented demand for all types of houses in Leitrim.
One of the biggest game changers has been the opportunity for many to work from home.
Employers are seeing that it will be an option for their workers going forward which has resulted in people looking at buying homes far outside cities and major urban centre.
According to Joe Brady of REA Brady Auctioneers this has led to two trends.
There are those people who have no connection to the area looking to move here as the cost of property is lower and Leitrim, for many, offers a better quality of life.
Then there is the second cohort of buyers who have strong family links to the county and are hoping to return and raise a family here. Liam Farrell of Sherry Fitzgerald Farrell gave an overview of the current situation: “The Irish banking and property implosion commenced towards the end of 2007/early 2008 and by the second quarter of 2010, Irish house prices had fallen by 35%.
“Since the peak of this collapse in 2012 our population stabilised and then grew to currently just under 5 million with a new generation of home buyers in the market place, either mortgage approved with significant deposits or indeed, cash purchasers, having returned from abroad with their hard earned savings.
“The problem is that construction costs and associated fees and levies have sharply risen during this period due to global trade (China, India, etc.) but in particular, a disproportionate high tax take by successive Governments in Ireland who reap vast sums of VAT, Stamp Duties, etc. on all aspects of construction and new home sales.
“In addition, the lack of finance and/or cost of funding new residential construction is prohibitive.
“Hence, our declining housing stock, lack of new homes and of course, in Leitrim and other counties the extreme obstacles put in the way of building on family lands and returning to one’s roots.

“Also, the ‘ghost estates’ and receiver properties have been purged with many buyers bagging great bargains in the 2013 – 2016 period
“So the ‘one off’ house is no longer an option for most aspiring home owners, former ‘rental or receiver’ stock has all been sold, no new residential schemes on the horizon and Covid-19 has given people time to reflect on moving out of urban centres and for many the opportunity to work from home for the most part.
“In addition, with Spring 2020 lockdown, few family homes if any, came to the market in 2020 and it's the same for 2021 so far.” 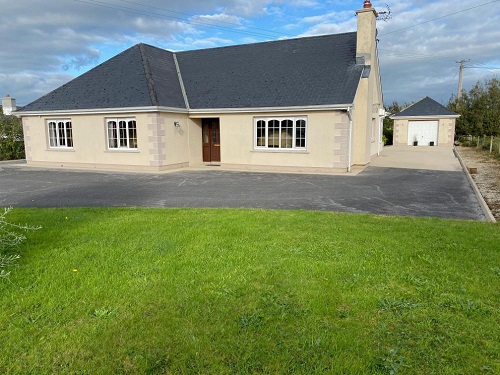 This property at Killaneen, Ballinamore,  sold by Gordon Hughes made well in excess of the asking price.

His comments were also reflected by Gordon Hughes of Gordon Hughes Estate Agents who said that their offices in Ballinamore and Ratoath in Meath are experiencing unprecedented demand for all types of properties.
“With historically low levels of stock available this is resulting in properties that we are currently listing having multiple bidders with an average sale agreed time of 5-6 weeks.”
Hughes advised there is a number of reasons for this but primarily it is due to people returning home to live in the area as a result of their employer allowing them to now work from home but also due to the fact that there has been no new housing developments built in areas such as Leitrim since 2010 resulting in an increasing lack of supply being available year on year.
“From 2010 until 2017 the oversupply of properties in this area helped to keep prices deflated, however since then supply has become an issue resulting in a an average of 8% per annum in price inflation. However since the pandemic hit we have seen a significant increase in sale prices of anything between 10-15% in the last 12 months due to having multiple bidders on property”.
He added that they have a number of unsuccessful under-bidders on properties that have recently been sold and they urgently require properties for sale as a result.
Joe Brady also outlined that property prices in Leitrim are still very low compared to other parts of the country.
However he added that an important and overlooked factor is that he and other auctioneers are selling properties far less than it would cost to build them, estimating a difference of about 25%.
Putting that into context he said that buyers in Dublin and as far afield as Mullingar are paying 150% of the build cost.
With the stock from ghost estates having dried up and little or no new buildings this has resulted in a very limited supply coming on stream.
Strict planning laws and the T90 test has also resulted in very few one off houses being built.
Gerry McLoughlin of Abbey Property Sales in Rooskey also said that demand has been very high since last June and therefore properties are selling quickly and for great prices.
They are selling homes up to €50,000 over the guide price.
“Sites with planning or OPP are selling but planning in the countryside is very difficult to obtain. Planning laws will need to be reviewed otherwise all our young people will have nowhere they can live in rural Ireland.”
He added that “No new properties have been built for sale over the past 12 years and now it is showing with the current supply at an all time low.
“Over the past five years we have been selling houses which were once in unfinished estates. There are little or none of these properties remaining.”
Local buyers are dominating the market at the present time.
A cottage in Dromahair recently made four times it's asking price, being auctioned for €40,000 but obtaining a final bid of €162,000.
The agent Joe Brady said that there were10 locals registered to bid for the house and four from outside the area.
“In previous years UK buyers were always a factor in most rural sales. This year they are few and far between”.
As in many aspects of our lives during Covid technology has certainly played a huge role, paving the way for the success of these sales.
Property marketing via portals such as MyHome.ie and Daft.ie; better property details and virtual tours have all combined to make it possible for buyers to progress their property search from home.
Broadband is also a huge factor now for buyers while for others space is top of the agenda.
All in all, if you are selling your property today, this is the optimum time to do so.
The planning controversy has been rumbling on for years and we are now beginning to see the results.
People want to move to Leitrim, to live, work and play here but we need houses for them and thus ensuring a growing population and the survival of rural townlands.