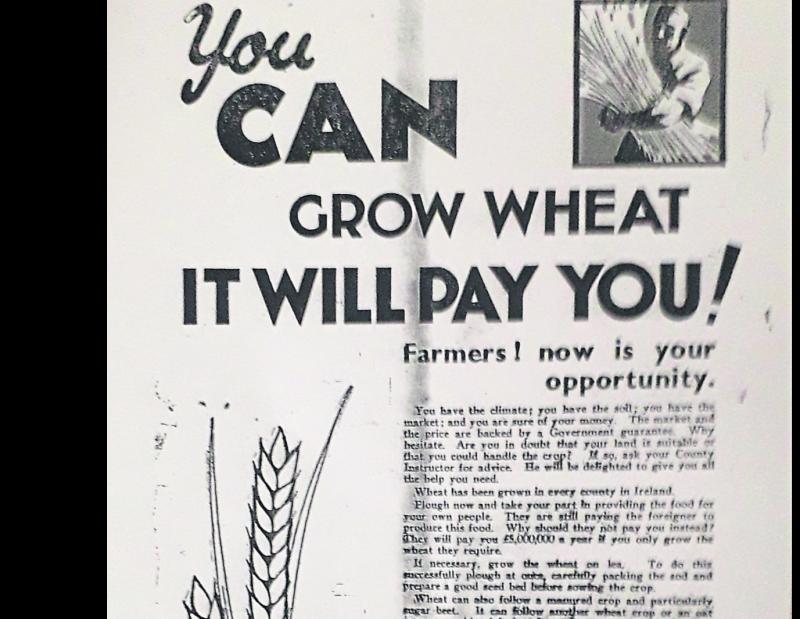 The soil in Leitrim is poor, in places no more than an inch deep. Underneath is daub, a blue-grey modelling clay, or channel, a compacted gravel. Neither can absorb the heavy rainfall. Rich crops of rushes and wiry grass keep the thin clay from being washed away.

The opening paragraph from John McGahern’s wonderful ‘Memoir’ published in 2005 shortly before his untimely death.
Because of the poor quality of Leitrim land many people, mostly from outside the county, have recommended widespread forestry as a solution. This is a totally unfair opinion and an affront to the many thousand Leitrim farmers and their families who worked the land in good times and bad over the centuries often overcoming great difficulties.

So, what was the advice of Co. Leitrim’s Agricultural instructor, Mr. J.J. O’Sullivan to the farmers of Leitrim in 1932. Grow more wheat!
This was a government led scheme. While acknowledging that only small areas of land in the county were suitable for this, classes were set up and financial assistance was given to interested farmers.

The following is a report from Mr. O’Sullivan printed in the Leitrim Observer in October 1932:
Because of the peculiarity of the soil, Leitrim is reputed not to be adopted for wheat growing. That is generally true, there is no doubt. The greater portion of the soil is heavy, retentive and sour and experience has shown that even middling crops of wheat cannot be grown in soils of this nature.
There are, nevertheless, some parts of the county where soil is not of this nature and where average crops of wheat can be grown, provided certain conditions are fulfilled. These districts with few exceptions are in the southern part of the county. They comprise certain portions of Kiltoghert, Annaduff, Dromod, Bornacoola, Mohill and Carrigallen.
To a very limited extent it can be grown in small areas in north Leitrim in the districts of Manorhamilton, Dromahair and Kinlough. The first essential to suitable cultivation is suitable soil.
Upland clay loam gives the best crops, any upland clay that is fairly open and deep with preferably a southern aspect may be relied on. Good crops can be raised on heavy “moors”. 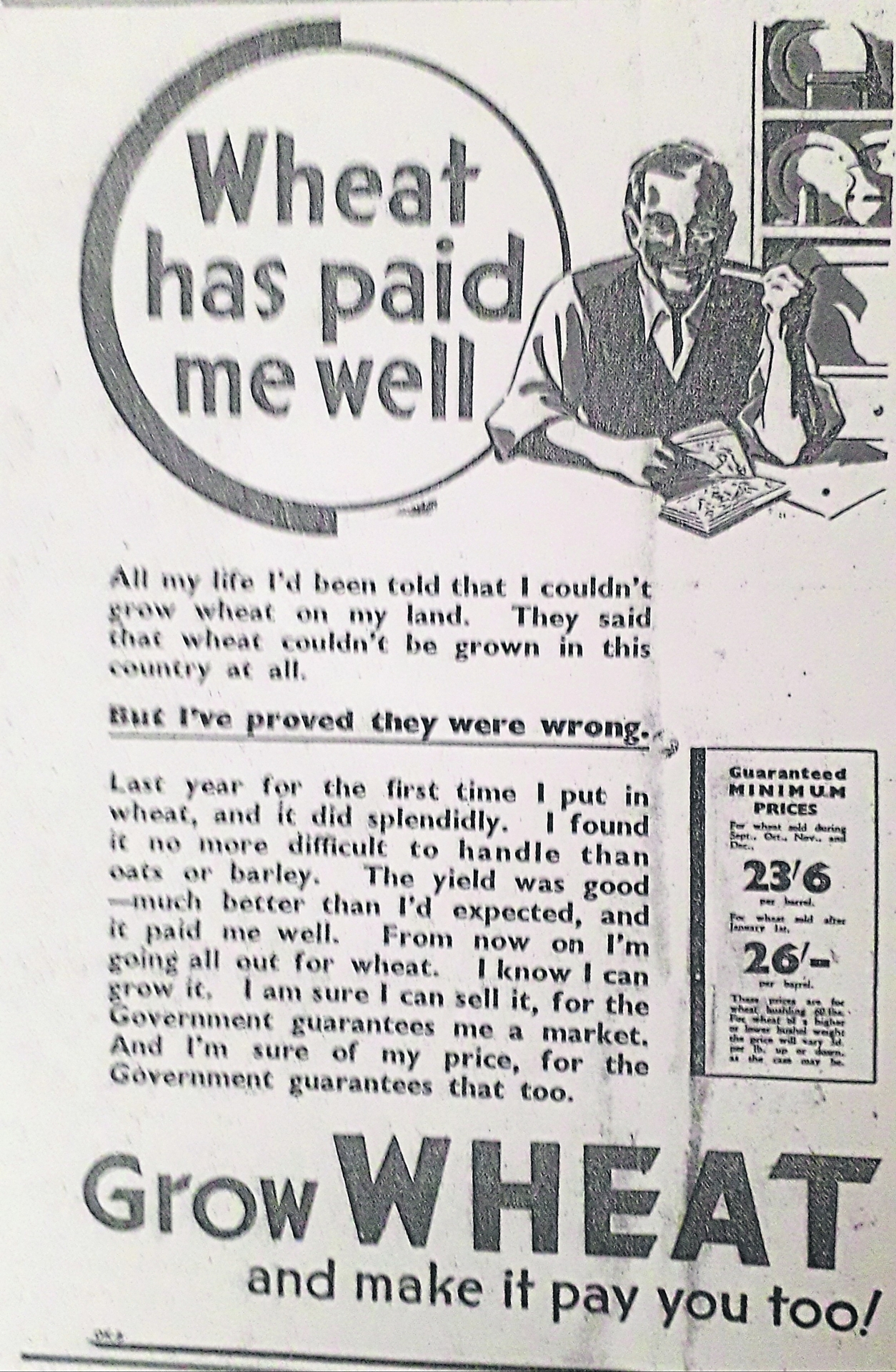 Whether soil is upland or moor, the important essential is that the plant roots will not be water-logged during the winter.
To guard against this, I find it very necessary and strongly recommend in almost all cases that the soil be “furrowed”, that is, the crop should be sown in land from 2 to 3 ridges in width. This will ensure a dry bed and a better cover for seed.
The second important point is to sow in time. If possible, wheat should be sown before the end of October but not later than the middle of November.

Early sowing means early harvesting and a better crop. Here the important point to aim at is to have the young “braid” sufficiently strong and well established so that it will withstand the severity of Winter storms.
In the south of Ireland wheat could be sown during any month of the winter without much risk of failure. This is due to the fact that the soil is warmer and the climate milder.
Experience has shown that it would be fatal to attempt sowing wheat during the period from the middle of November to the middle of February.

Thirdly, the variety to sow is an important consideration. Some varieties are better able to withstand the Winter than others and also may be sown later in the season.
As a result of variety trials conducted in past years I find that the two most suitable varieties for general cultivation are Queen Withelmina and Square Head Master. These can be purchased through any local seed merchant or direct from the Dublin seed merchant.
The I.A.W.S., Thomas St., Dublin have been entrusted by the Department for the handling and distribution of wheat seed this season. They hold considerable stocks of these and other varieties and seed merchants will have no difficulty in procuring their requirements from them.
The price is reasonable, it being offered at 30/- (thirty shillings) per barrel or 1/6 (one shilling and six pence) per stone. 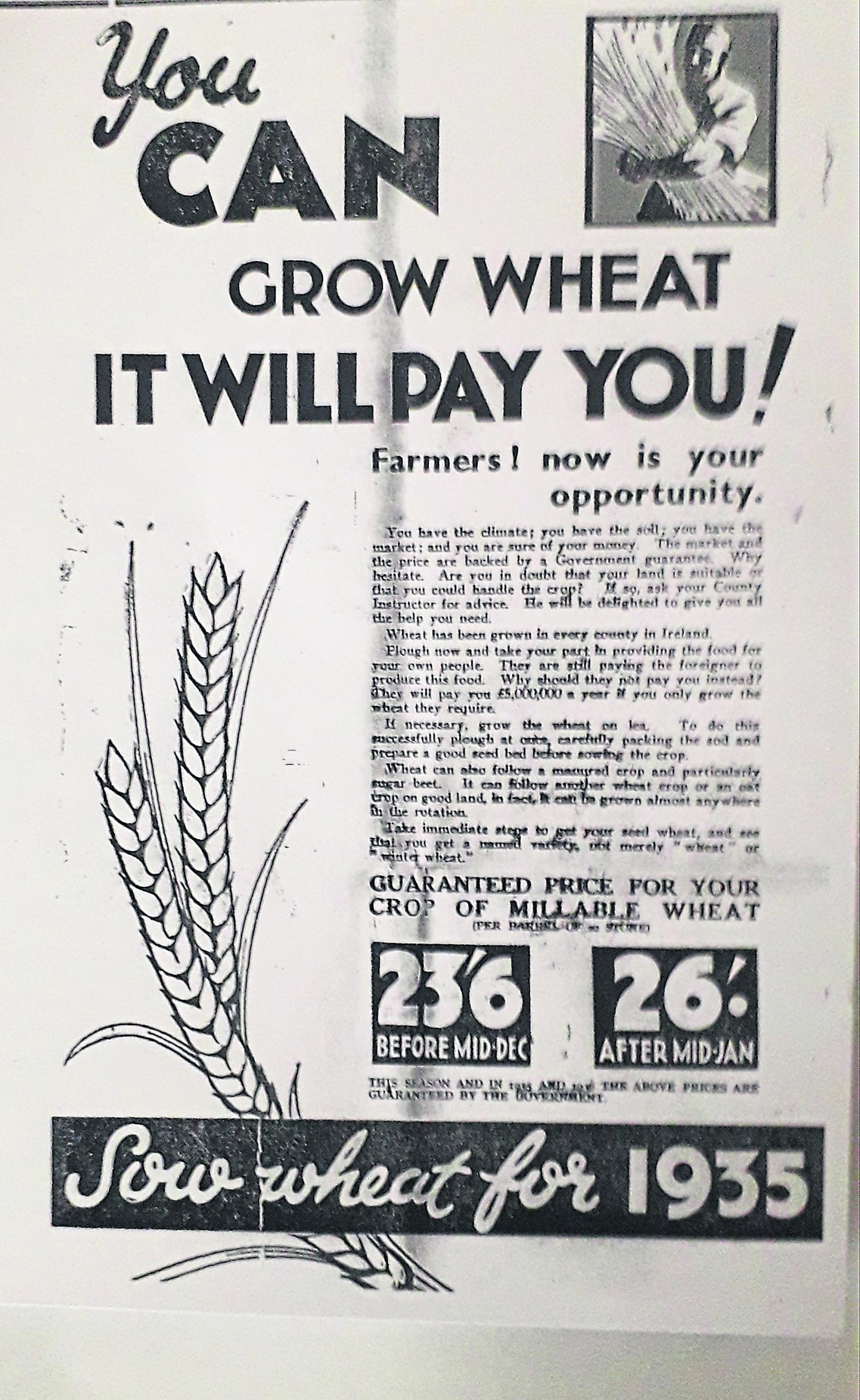 In the Leitrim Observer dated the 29th of October 1932, it was reported that a series of lectures on wheat growing and cultivation were being delivered in suitable districts in the county. Judging by the attendance at these lectures they are a great success.
The Leitrim Committee of Agriculture has arranged to distribute wheat seed for half acre plots at half price. Up to 100 of these plots have been selected by the Committee instructor Mr. J.J. O’Sullivan.
Addressing a large meeting of farmers in Manorhamilton in April 1934 the then Minister for Agriculture Dr. James Ryan said he was glad, as he passed through Leitrim, to see there had been an increase in wheat growing in the county.
However, at a meeting in Mohill the same week Dr. Ryan was told that farmers could not avail of the scheme as they had no mills to grind it. The Minister said he was prepared to get help for Co-Op societies or individuals who would put up mills for the purpose.

The late Brian Dolan, a native of Manorhamilton, who grew up in Carrick-on-Shannon, remembered his father growing wheat in Rosebank outside Carrick-on-Shannon and Brian himself bringing it by donkey and cart to Candon’s Mills in Boyle for milling.
Sources: Leitrim Observer archives with special thanks to Mary Conefrey, Local History Project, County Library, Ballinamore.
Submitted by Dermot McNabb, Carrick-on-Shannon and District Historical Society, St George's Heritage and Visitors Centre.