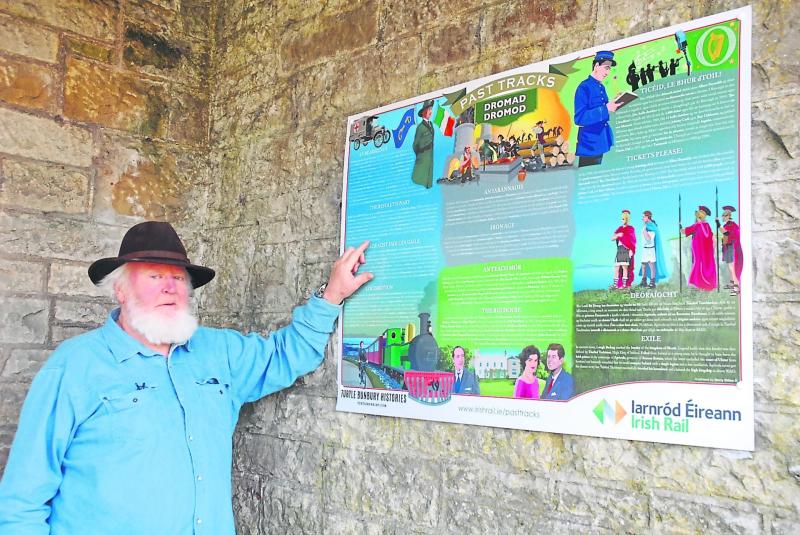 The incredible story of Rooskey native, Bridie Clyne, has been immortalised in a new panel recently unveiled at Dromod Railway Station.
Born in 1898, Bridie grew up on a small Shannonside farm. She emigrated to Edinburgh as a teenager where she worked in a cafe, but still kept strong links with her native country joining Cumann na mBan.
Serving on the Anti Treaty side in the Irish Civil War, Bridie rammed the barricades around the Four Courts in 1922 driving an ambulance filled with guns, despite coming under ferocious fire from an 18 pounder gun across the Liffey. Part of the Dromod panel includes an artist's depiction of the ambulance she drove that day.
The panel also details how Bridie was by Éamon de Valera's side when the future Irish leader narrowly avoided assassination in Ennis - she later risked her own life driving him to a safe house.
Bridie worked for the republican's underground through the Civil War, delivering weapons, clothing, and medical supplies. She even spent three months in jail under the assumed name of Anny Hardwicke after a raid on a 'secret' house in Merrion. Bridie also went on hunger strike for a month and during her stay in Kilmainham suffered lifelong injuries to her leg after a warden pushed her down the stairs.
Last week her son, Proinsias Ó Rathaille travelled from Dublin via train to Dromod to view the panel in-situ for the first time. He is immensely proud to see his mother's story honoured in this way.
“This (panel) has made my day, it is wonderful seeing it. I came up (to Dromod) on the train and I nearly wept when I got off. It was the first time I had seen it in place,” he acknowledged.
He said that it was particularly poignant as his mother had boarded a train at Dromod, aged just 19, to emigrate to Scotland.
Growing up, Proinsias was aware of his family's link to Republicanism, after all his father Niall, who married Bridie in 1940, was the son of The O'Rahilly, the only rebel leader to die in action in the Easter Rising. His uncle had married a sister of Kevin Barry, who was executed by the British Government during the Irish War of Independence.
Proinsias himself recalls playing with The O'Rahilly's rifle - found by his side in 1916 - as a small boy acknowledging “it was very naughty of me”.
But he acknowledges he was surprised by the extent of his mother's involvement in the Civil War. He said that he had been aware of his mother's 'pals' people such as Cathal Goulding and Moss Twomey, but admitted it wasn't until after she died in 1971 that her story came to light and even then this was only by chance.
“We only found her bag, an attache satchel after she died. I lifted it up and this stuff flew out on the ground. I mean it was filled with letters,” explained Proinsias.
“We had no idea that she had been this involved but when you see the letters you realise there was nobody she didn't know.”
Bridie had typed a short record of some of her experiences but within the bag itself, secreted under a step in the cellar of the family home, Ballinascorney House, were letters from some of the most well known people in Irish and International politics.
“I even found a letter a letter from President Roosevelt's wife thanking her so much for bringing over the wool from the woolen mills of the Ha'penny Bridge so that they could make a suit for him, the President, out of the tweed that he loved so much. I mean just extraordinary letters,” said Proinsias.
“If we hadn't found that satchel we would never have known of what she did.”
However, he stresses that his mother's story, and that of all the women who fought, is something which should be shared and honoured.
“This story doesn't just belong to my relatives. This story belongs to our nation and it is important to realise the commitment that these brave women made. She fought beside Liam Mellows and Rory O'Connor. She was tough, she was brave and there were so many other women like her who deserve to be honoured, especially for the year that's in it,” he said.
“I feel Bridie is home especially in this centenary year, this means everything to me. I have shared her story. This (panel) is now here and her story will continue. I felt I had to do that and I am proud to see her recognised at the station she left so many years ago.
“My job is done now. My job is done”.