Gearing up for the Leitrim 2 London fundraising cycle 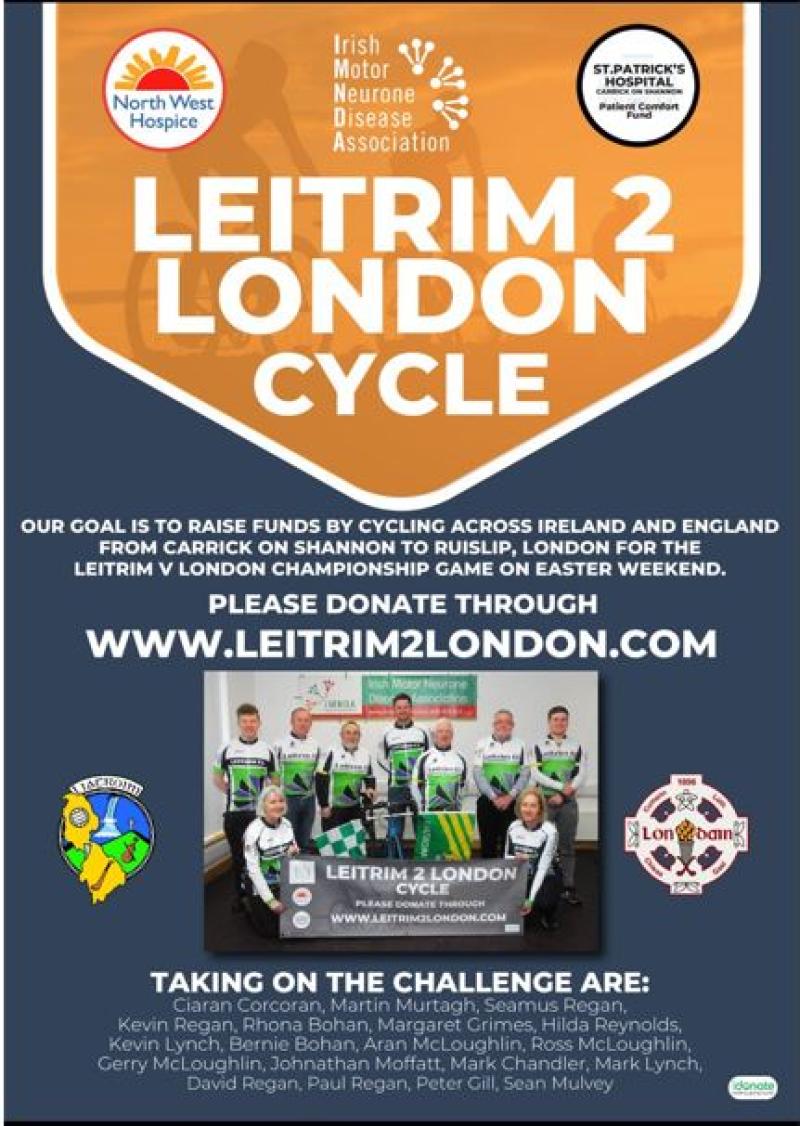 A group of local cyclists from Leitrim Cycling Club are about to embark on the gruelling challenge of cycling from Leitrim to London, in a bid to raise funds and with the aim of making it to Ruislip for the Leitrim V London championship game over the Easter weekend.
The organisers explained “There was a discussion amongst a few in Leitrim Village about going to the Leitrim v London Championship game in London on the Easter Weekend.
“This then progressed to using it as an opportunity to raise funds for charity through an activity, and that resulted in a commitment to cycle from Leitrim Village to McGovern Park in Ruislip, London.
“The choosing of charities was a more simple task due to the awareness of a recent diagnosis of MND to a close friend of many in the village, this then progressed to discussing previous people impacted by the same condition and the support services for people with the condition.

“Though the occasion created the opportunity to cycle the fundraising was not focused on the GAA community as MND impacts the whole community though the GAA is an important part of all communities.”
The cyclists spokesperson continued “The team wasn’t chosen, they all volunteered once the word started to spread; there were a number that wanted to participate but getting the time off and other commitments meant some of these people couldn’t partake.
“As many of the participants were already involved with Leitrim Cycle Club it actually helped increase the members of this club. It also made the training regime easier to develop as the club were already meeting on Sundays and taking to the road. Over the past few weeks the intensity has increased with the team going out on a daily basis to get the miles into the legs.
“As we get closer to the occasion the support has been very strong, with Charlie Bird's event also supporting MND the awareness and commitment from people has been wonderful.”

Looking ahead to reaching their final destination he added “When we get to London on Friday, 15th April there will be a closing event in The Claddagh Ring pub (@10 Church Road, Hendon) and as part of the night we will be auctioning a signed Leitrim GAA team jersey, a stay in Drumhierney Woodland Hideaway (Leitrim Village) and many other items.
“For all involved it will be a once in a live time experience that will create great memories and we hope the funds raised will provide some much necessary additional services to individuals impacted. We will be on the road shortly so please come out and support us along the way.”

In conclusion he said “We would also like to say a big Thank You to everyone for their generous donations on iDONATE so far!”
If you would like to learn more or make a donation, you can go to Leitrim2London.com and it will take you to the donation page, or email Leitrim2London@gmail.com or message us on Facebook !