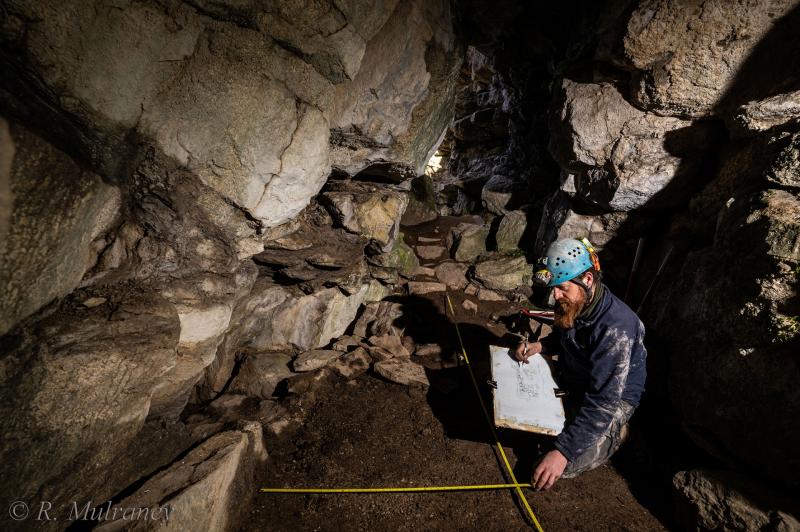 In an exciting new project, a Sligo-based team have completed the excavation of a cave used during the Civil War as an anti-Treaty IRA hideout. The project, funded by Atlantic Technological University (ATU), reveals a forgotten story in Sligo’s recent history, in what is the first research excavation of a Civil War site in Ireland.
The team of three archaeologists – Dr Marion Dowd (ATU), Robert Mulraney (Independent Researcher) and Dr James Bonsall (Fourth Dimension Prospection Ltd.) – spent over a week excavating a small cave high in the Dartry Mountains overlooking Glencar Lake in north County Sligo.
The cave was used as a hideout during the War of Independence and was the principal hideout of the North Sligo anti-Treaty IRA during the Civil War.

In September 1922, the National Army closed in on the anti-treaty IRA headquarters at Rahelly House north of Sligo town. After an intense firefight, approximately 60 men evacuated the house, making for Benbulben, with the intention of crossing the mountains to reach the safety of Tormore Cave – better known as the ‘Glencar hideout’. Several IRA men were captured on the mountains and imprisoned by the National Army.

Six men were shot and killed at two different locations in the uplands. These men - Brigadier Seamus Devins, Divisional Adjutant Brian MacNeill, Lieutenant Patrick Carroll, Volunteer Joseph Banks, Captain Harry Benson and Volunteer Thomas Langan - became known as Sligo’s Noble Six.
A further 34 men successfully reached Tormore Cave and lived there for the following six weeks. The men were never discovered, making this one of the most successful hideouts of the entire revolutionary period in Ireland.

Following the Civil War, the location of Tormore Cave was lost. In the mid 1930s, however, General Officer Commanding William Pilkington, one of the men who had hid there in 1922, returned to Sligo and revealed its location. During his time in the cave, he had nursed an injury to his shoulder which had he broken during recent fighting. Anecdotal accounts recollect that while in the cave, Pilkington vowed to become a priest if he survived the war. This he did, and went on to be ordained as a Redemptorist priest serving in Cape Town, South Africa and England.

Archaeological excavations
The archaeological excavations sought to document the hideout and learn more about how it was utilised as part of guerrilla tactics. The excavations revealed that the cave had been modified and prepared for usage, probably during the War of Independence.
A large boulder was strategically placed at the entrance. On either side of this, stones were piled against the cave walls and fixed with mortar. This served to conceal the cave entrance making the hideout extremely difficult to find. It is likely that a sentry was positioned inside the cave behind the boulder, from where he commanded expansive views over the surrounding landscape.

Inside, excavations through soil layers revealed a series of constructed steps leading from the entrance into the cave. With further excavation it was found that the men had also prepared a mortar-surfaced floor, layered over with flagstones, in a similar way to traditional Irish cottages of the 1920s.
A mortared wall was also built to enclose the space. This construction would have served to keep the living space clean and created a warmer and drier surface for men sleeping there. But it was far from luxurious: The 34 men endured harsh conditions in the cave. They could not light fires as the smoke would attract attention. They had to survive with little food, cramped into a small, damp and dark cave for many weeks.

Artefacts discovered
The excavations produced almost 200 artefacts. ‘This is the first archaeological excavation of a Civil War site in Ireland’, Dr Marion Dowd of Atlantic Technological University commented. ‘Many people knew that a mountain cave had been used as a hideout for six weeks, but almost no one knew where it was located. Because so few people have visited the cave over the past 100 years, the site was essentially a Civil War time capsule. The structures and artefacts we discovered were as they had been left when the men abandoned the cave in October 1922’.

Sherds of pottery and glass were recovered that related to food brought by local families to feed the men. ‘Much of the pottery probably came from Sarah Branley’s kitchen’, Dr James Bonsall explained. ‘The Branleys lived a short walk from the cave and two of Sarah’s sons, Paddy and Dominick, were hiding in the cave. One of the main problems the men encountered was Trenchfoot, caused by prolonged exposure in damp conditions. Apparently Sarah tended to the men’s feet on at least one occasion when some of them left the cave during a bad storm and came to her house.’

‘We also found several personal items that give us an insight into the men’ said caver and archaeologist Robert Mulraney. ‘We found a boot lace, a belt buckle and a clay pipe. As part of the project, we are trying to identify the men who sought refuge in the cave, who survived the ordeal and who then became largely forgotten. So far we have identified seven men and have been speaking with their relatives’.

The team hope that people who had relatives that stayed in the cave will contact them. ‘This is not just a Sligo story. We have had contact from people in Boston (USA), London, and Counties Galway, Down and Dublin whose father, grandfather, uncle or granduncle stayed in the cave during the Civil War. We hope to hear from others’ said Dr Dowd. The public are reminded the cave is on private property. If you have any information about the cave, the team can be contacted at: dowd.marion@itsligo.ie