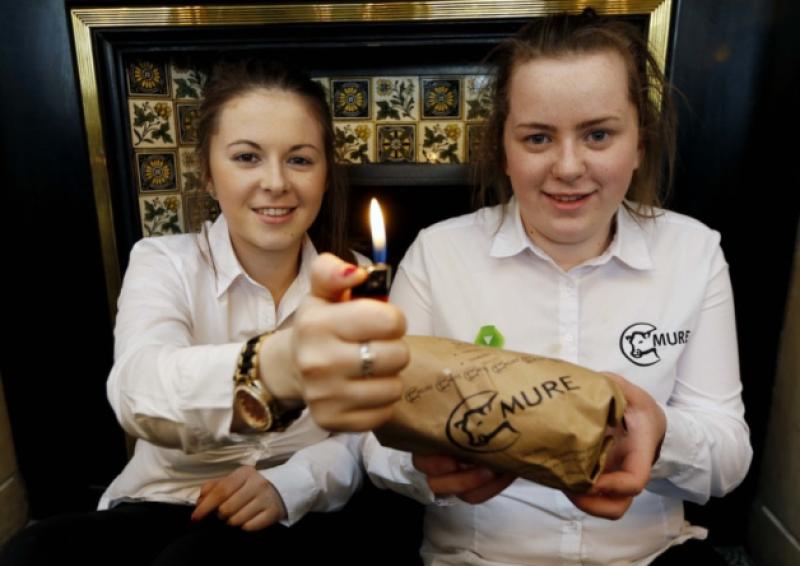 Two teenage business students from Leitrim have been honoured at the Youth Entrepreneur of the Year Awards 2015, organised and run by Foróige, for their ‘udder-ly’ genius cow-manure briquette business.

Two teenage business students from Leitrim have been honoured at the Youth Entrepreneur of the Year Awards 2015, organised and run by Foróige, for their ‘udder-ly’ genius cow-manure briquette business.

The two were amongst the 1,000 participants who set up 600 businesses as part of this year’s Foróige Network for Teaching Entrepreneurship (NFTE) programme, generating a collective turnover of €250,000.

The Transition Year Students from St Clare’s Comprehensive School in Manorhamilton, cousins Linda Dolan (16) and Clare Dolan (16) were honoured at a ceremony this week in the Mansion House, Dublin, for their business ‘MURE’ which offers fire logs made out of cow manure.

“MURE’s aim is to reduce global warming as our product is renewable and made out of a completely natural resource – cow manure,” explains Linda. “‘Your Effluence is our Affluence’ is our business motto,” she added.

Explaining where they came up with their innovative idea, Clare said: “We were on our family farm when we were discussing the amount of cow manure that is being wasted and not being used for anything.

“We were trying to think of ways to turn this vast amount of cow manure into euros when we came up with the idea to dry it out and burn it.”

A year-long scientific study carried out by the girls in conjunction with their school and Sligo Institute of Technology on their product found it to be more efficient than its peat counterparts.

However, it hasn’t all been a walk in the park for the duo. “One of our biggest challenges was that our customers were worried about an odour from cow manure briquettes,” she explained.

A MURE fire log costs €4 and fire bag, which consists of their briquettes, kindlers and a fire lighter, costs €5. Since MURE was established last October, the business has generated an income of €1,154.

The girls are hoping to take their product nationwide. “We are in consultation with McPartland Fuels, Corrib Oil and also several Apple Green stores asking them to stock our products,” said Linda.

The girls are not merely milking their success. MURE donates 10% of its profits to the Irish Cancer Society and Mental Health Ireland.

Commenting on their experience, Clare said: “After taking part in the Foróige NFTE programme, we are both interested in studying business in the future. We’ve learned so many things from setting up our own business – though the biggest lesson is you get what you put in. It’s been a fantastic experience!”

CEO of Foróige, Seán Campbell, paid tribute to all the participants in this year’s programme, but stressed that more support is needed to sustain the level of participation in the programme in the future.