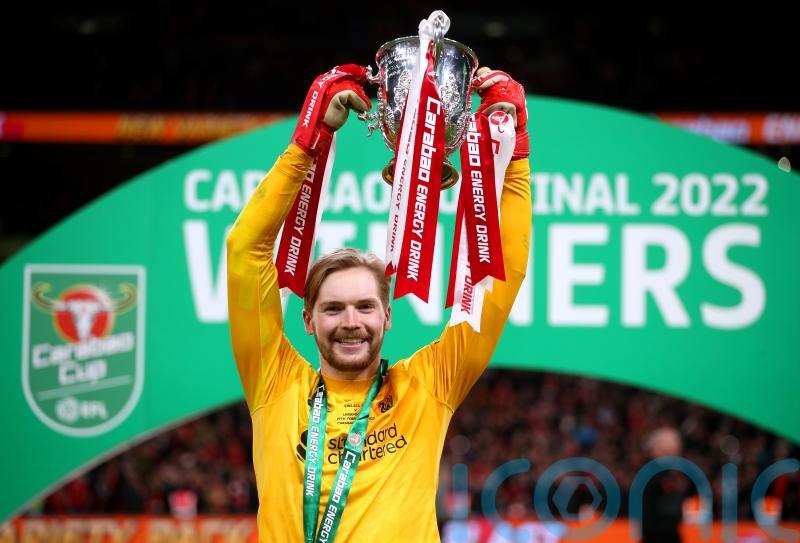 Liverpool manager Jurgen Klopp was delighted Irishman Caoimhin Kelleher proved the critics wrong with an impressive performance and the match-winning penalty in the shoot-out as his side claimed a record ninth League Cup against Chelsea at Wembley.

Klopp’s decision – announced a month before the final – to keep faith with the Republic of Ireland international for the club’s first domestic trophy win in a decade had brought scrutiny from some quarters who felt he should have picked Alisson Becker in an otherwise first-choice side.

However, the 22-year-old, who had played in all the previous rounds apart from the semi-final first leg when Alisson was given a game after a Covid absence, fully justified his selection.

Kelleher produced a number of good saves in a goalless 120 minutes before stepping forward to score the decisive penalty in a shoot-out which finished 11-10 as the only player to miss was his opposite number Kepa Arrizabalaga, who was brought on specifically for the penalties with seconds of extra-time remaining.

“He had an incredible game. People asked me rightly two weeks ago if we will give Caoimhin another game to get some rhythm or whatever,” said Klopp of a goalkeeper who had not played for three weeks and was making only his eighth appearance of the season.

“But that’s life of a number two, especially for a young number two, that you just have to be ready when you are called.

“The game he played tonight was absolutely incredible. I’m not 100 per cent sure I have the full story of the whole game but I can remember at least two incredible saves – probably there were more.

“So he proved that the decision to line him up was absolutely right.”

Kelleher, the shoot-out hero in the quarter-final victory over Leicester, got close to a couple of spot-kicks but hardly had a chance with any of Chelsea’s first 10 attempts.

With all outfield options exhausted he then had to step up and, showing the prowess he displayed as a striker for Ringmahon Rangers before his dad persuaded him to become a goalkeeper, he smashed home his own penalty before watching Kepa blaze over.

“In a very spectacular penalty shoot-out he showed the whole range of his skill set,” added Klopp.

“First and foremost, he’s a goalkeeper but he finished one off with his really skilled feet. Top class.

“Alisson Becker is the best goalie in the world for me. There are (other) goalies out there but this goalie is absolutely insane.

“But to be 100 per cent honest, for me Caoimhin Kelleher is the best number two in the world as well, especially for the way we play.”

Victory secured the first leg of a still improbable shot at a quadruple and was third time lucky for Klopp at Wembley, having lost the 2013 Champions League final there with Borussia Dortmund and the 2016 Carabao Cup final on penalties in his first four months with Liverpool.

They remain contenders in the FA Cup, playing Norwich on Wednesday, and the Champions League where they hold a 2-0 last-16 first leg lead over Inter Milan, and are six points behind Premier League leaders Manchester City with one match in hand.

“We were here and lost a final in a penalty shoot-out like six years ago. Afterwards nobody talks about it, it’s like, ‘You were twice at Wembley and you lost both finals’,” added Klopp.

“In 10 years’ time nobody will ask ‘How did you win exactly against Chelsea?’ You just have to win it.

“Were we better tonight than that time against City? I’m not 100 per cent sure to be honest but we are more experienced, that’s a massive difference.

“We don’t get nervous when things don’t go well. We keep really our nerve and stuff like this.

“Over 120 minutes you cannot hold them (Chelsea) back from your goal, so they had their chances and obviously they scored ‘goals’ more than us, but they all were offside.

“That’s pretty harsh to take for them, I can imagine, but I’m really happy about the effort and all these kind of things.

“Yes it’s a big one for us because it’s the first time for this group but the ninth time for the club, which is very important as well.”