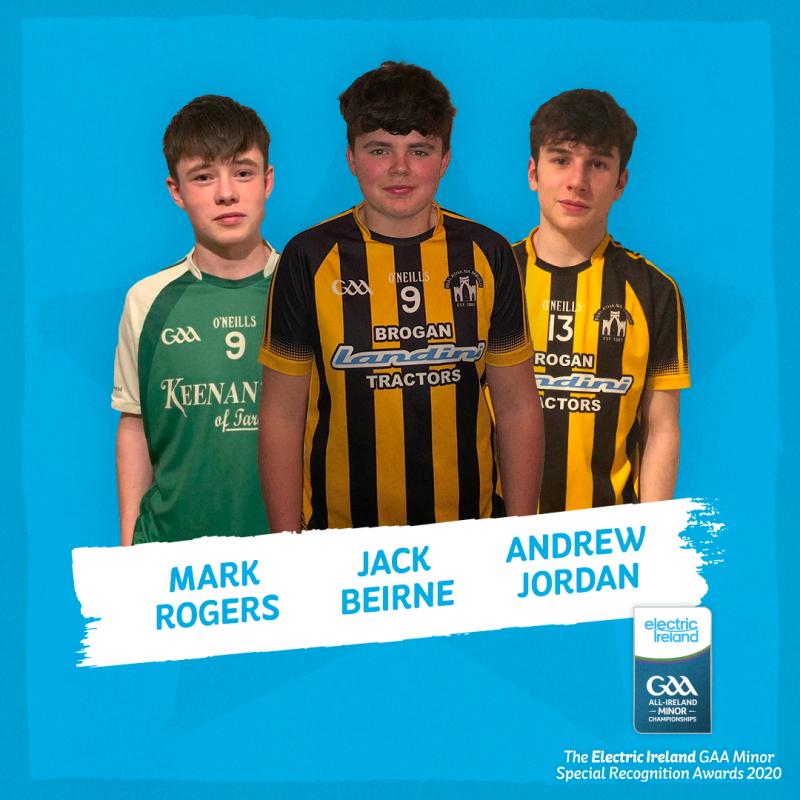 The three Minor footballers from Strokestown and St Barry's

Three Minor footballers from Co Roscommon have been honoured by Electric Ireland as they were crowned the Connacht winners of the 2020 Electric Ireland GAA Minor Special Recognition Awards.

The awards saw Minors from all four provinces of Ireland being honoured for their outstanding off-the-pitch contributions in their communities during 2020.

Colm Cavanagh, 2004 All-Ireland winning Minor, and one of the judges for the Special Recognition Awards, announced the award recipients.

Jack himself is a childhood survivor of Leukaemia and had benefitted from the Childhood Cancer Foundation’s services. As part of a Transition Year project, Jack, Andrew and Mark purchased an old tractor in the hopes of restoring it and selling it, with the proceeds going to the charity.

When word spread around the community of the project, people from Roscommon began donating parts to help support the cause.

The project went from strength to strength, and they began selling raffle tickets for the now fully restored tractor, which will be raffled off in early 2021.

These unique Electric Ireland GAA awards took into consideration the difficulties experienced in 2020 by players and communities across the country, and aimed to bring a major moment back into the lives of this age group.

Speaking about the award winners, Edel McCarthy, Head of Sponsorship & Brand at Electric Ireland stated: “Electric Ireland is delighted to recognise these three young men with the Connacht Electric Ireland GAA Minor Special Recognition Award for their outstanding contribution to society in 2020. In what has been an extremely challenging year for all, and in particular, this age group, these three young men have stood up and made an incredible impact not only on their communities, but on Irish society with their superb fundraising efforts.”

Uachtarán CLG John Horan said; “’On behalf of the GAA, I would like to congratulate each of the Electric Ireland GAA Minor Special Recognition Award winners. These awards showcase that the GAA is not just about what happens on the pitch, but that the community is at the heart of everything that we do. These young men are a credit to the Association, their clubs, their families, their schools and, most of all, themselves.”

Former Tyrone footballer, Colm Cavanagh added: “I was very proud to be on the judging panel for these Electric Ireland GAA Minor Special Recognition Awards. These young men have shown incredible initiative and bravery, as well as maturity beyond their years, and they should be very proud of themselves.
“I am delighted that Electric Ireland and the GAA have recognised their efforts and the incredible impact which they have had on their communities in 2020. While we hope that they can get back on to the pitch soon, they have demonstrated what the GAA is truly about.”