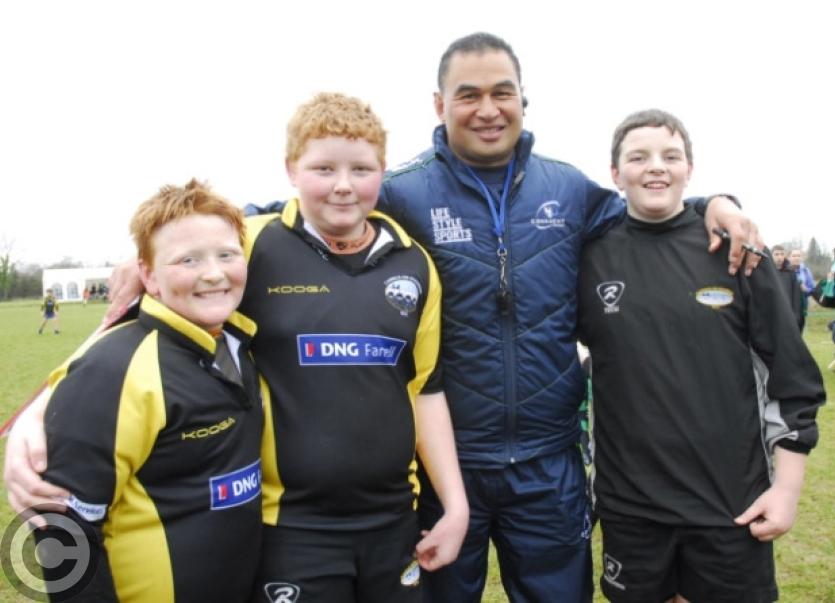 Amid the excitement that surrounded the visit of the Connacht Rugby team to Carrick-on-Shannon last Friday, there was also some serious work for manager Pat Lam and his players to get through.

Amid the excitement that surrounded the visit of the Connacht Rugby team to Carrick-on-Shannon last Friday, there was also some serious work for manager Pat Lam and his players to get through.

Well in excess of 500 people, young and old, came to catch a glimpse of the open training session and they got an insight into the intensity that goes into a session at this level.

Speaking after putting his players through their paces Pat Lam spoke about the greeting from the Leitrim public and what it means to Connacht Rugby to bring these sessions around the province.

“It’s a fantastic turnout, it’s great to get out into the community that we are representing. To go and promote the game is one thing but also for our players, particularly those that aren’t from Connacht, it helps them connect with the community and connect with the people we represent. When the game gets down to the last five minutes you’ve always got to know who you represent and this is great for our players. We just hope the kids enjoy it. It’s all about connecting.”

Pat pointed to Connacht centre Robbie Henshaw who was handed the number 12 shirt for Ireland’s opening six nations victory against Italy last Saturday, saying he can be a source of inspiration for the youngsters in attendance.

“We see it with Robbie Henshaw who only 10 years ago would have been in places like this. It’s an important responsibility for us that the players connect with all the kids and show them that there is a pathway if they want to wear the green shirt of Connacht and the green shirt of Ireland. Everyone is extremely proud of what Robbie is doing and it shows that you can go from grassroots rugby all the way to the top if you work hard.”

Turning his attention to matters on the pitch and next Saturday’s game against Scarlets, Pat noted, “We’ve had a good season so far but there is a long way to go. We know we can be better and we are working away at it. I think you can tell we had quite a tough session this morning because we have a massive game next weekend. We have put ourselves in a good position but we need to finish it off now.”

Another in attendance at the open training session, with a keen interest in the growth of the sport around the province was Connacht full-back and Carrick-on-Shannon native Shane Layden.

Taking a breather between drills and signing autographs Shane told the Leitrim Observer, “It’s brilliant, it’s overwhelming to see the support for Connacht here today. It wouldn’t have happened in the last few years and it’s amazing how far Carrick Rugby Club has come.”

Speaking about the benefits of taking the Connacht training sessions on tour around the province Shane said, “It’s spreading rugby around Connacht. As Pat (Lam) says, we are a five county team, so we really want to get out to the people who come and watch us in the Sportsground and give something back to the communities around Connacht.”

Shane was also quick to praise all the hard work that is being done at Carrick RFC and the strides the club have made in recent years.

“It seems to be improving all the time. The amount of people here and the amount of people that turn up for U12s and U14s and even at senior level where they were in their first final last year in one of the cups. It’s improving every week and every time people come training and obviously the facilities are brilliant now. This pitch is top quality, it’s one of the best pitches we’ve been on while we’ve been going around the communities.”

• Carrick RFC wish to offer a big thank you to everybody who turned up alast Friday, particularly all the schools in Roscommon and Leitrim who allowed pupils and staff to attend the event. The commitment of these schools, who work in partnership with our Youth Development Officer, Colm McWeeney, is greatly appreciated by Carrick RFC and without your involvement, the visit of Pat Lam and the Connacht squad would definitely have been a far less fun and vibrant open session.