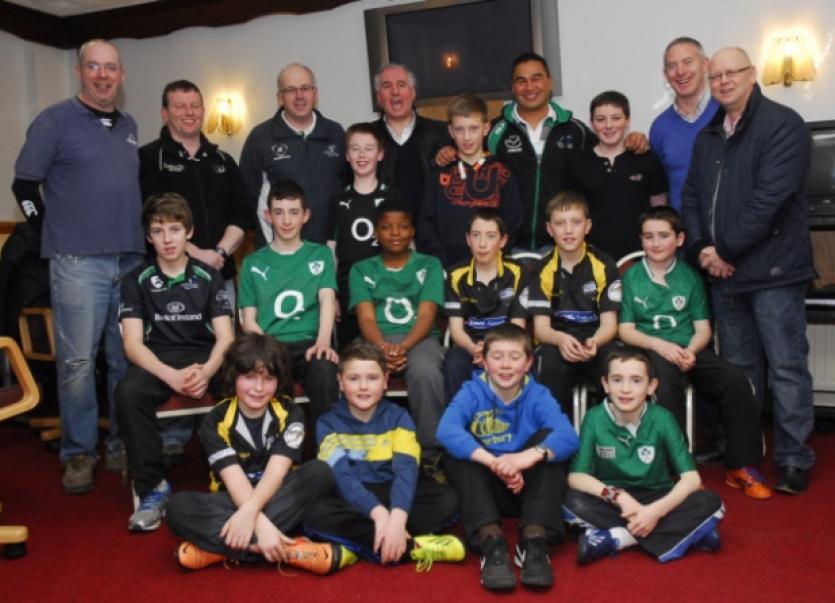 Last Saturday, Connacht Rugby Coach, Pat Lam and his son, dropped into visit our Mini players at training in Leitrim .

Last Saturday, Connacht Rugby Coach, Pat Lam and his son, dropped into visit our Mini players at training in Leitrim .

Pat spent the entire morning chatting and coaching with all the players and they also stayed on for a cup of tea and a chat with parents and players afterwards.

Pat was so selfless with his time and advice, every player and parent were seriously impressed with the man and will have great memories of a fantastic morning.

Also last Saturday, our U12s had invited Sligo U12s to a challenge match due to the Connacht U12s Blitz being postponed that day. Sligo arrived in large numbers and played two teams against our U12s and U11s. With Pat Lam giving halftime advice to both squads, it was a very enjoyable morning of rugby.

After the Ireland game, Pat called into the Bush Hotel where Pat spoke for an hour with youths and their parents and coaches who were at an away match in Cavan that morning.

Carrick coaches would sincerely like to pass on our gratitude to Pat Lam and his lovely family for visiting us but also a big thank you to all the parents who made sandwiches, brought goodies, staffed the kitchen and cleaned up afterwards. The morning was a huge success and hopefully one that will stand out in our players memories for a long time as a great morning of rugby.

New Jerseys: 95% of our Minis players have received their new club jerseys and thankfully everybody seems happy with them. We will also be ordering jerseys again in September for next season. Any queries, please send a text to 086 3867960 or email: minicrfc@hotmail.comand we will reply as soon as we can.

Youths: Our U13s have played in both the Connacht U13 Cup and Plate competitions but unfortunately are out of both. With the season nearly over, Coaches Steven, Donal and Gerry will finish of the season with a few challenge matches. Well done to a young developing team, who have gelled well together and despite a few loses, each of them persevered and stuck together to show the true character of each individual player. They are a credit to the club, their parents and themselves. Our U17s, who have joined forces with Ballaghaderreen to form the Harlequins, are out of the Connacht U17 Cup competition but are in the semi final of the Connacht Plate. Training continues for all players and we wish our players success and luck in their upcoming matches.

Minis: Next Saturday, the U10s will be playing their long awaited Connacht Blitz in Ballina. All U10s parents will be contacted during the week.