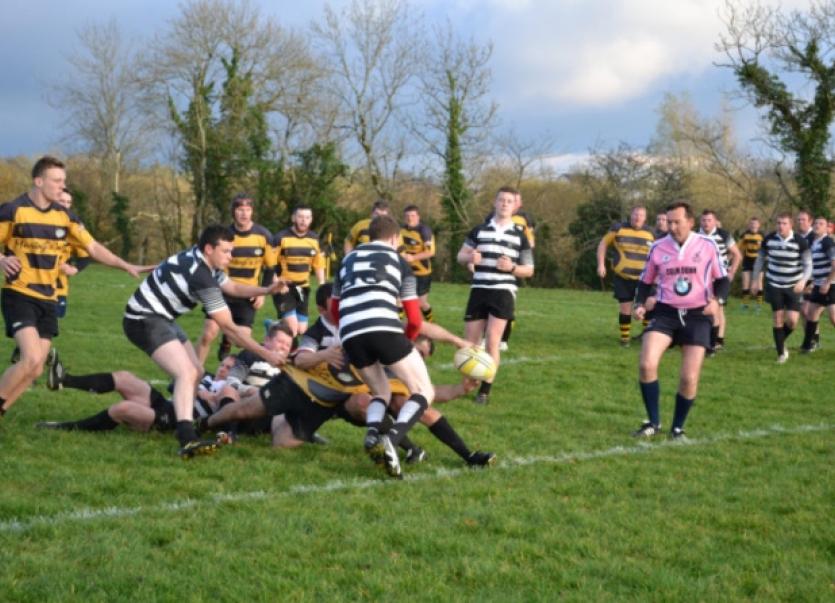 Carrick’s men kick started their season last Sunday when they played Connemara in their third league game of the season in J2.

Carrick’s men kick started their season last Sunday when they played Connemara in their third league game of the season in J2.

Having lost their opening two games against Corinthian and Tuam and the nature of the defeats, Carrick were keen to right some wrongs and perform for a full 80 minutes which had eluded them in those opening fixtures.

In near perfect playing conditions Carrick kicked off towards the road end where they immediately laid down and early marker through a dominant scrum and stubborn defence.

From early on Connemara found themselves pinned back in their own half, a plethora of forced handling errors, the result of excellent pressure been exerted by the Carrick defence. This pressure was soon after rewarded through two early penalties but Carrick failed to convert through Weaver and Coffey.

Despite leaving six points behind Carrick continued to play their game through powerful forward play, only using their backs when the opportunity presented itself. Guckian and Roddy were a constant thorn in the side of Connemara, running the ball at every opportunity.

Carrick nearly crossed for the games first try 10 minutes in through a wide ball fed to Lupton who bolted from inside his own half only to be pushed to touch from 5 metres out from a last gasp tackle.

It was clear that a Carrick try was inevitable, and so it was. After getting themselves into Connemara’s 22 Coffey whipped the ball out right to outhalf Weaver who showed great strength to fend off three defenders to cross the line. Weaver converted his own try and Carrick led 7-0 midway through the first half.

As always seems to be the way from a restart Connemara pulled three points back after Carrick were adjudged to be holding on, 7-3 and Connemara very much in the game.

Carrick set about regaining a foothold inside Connemara’s half, at times Carrick forcing the pass and squandering golden opportunities to extend the lead. But extend the lead they eventually did, Guckian ran a ball off the back of a scrum 10 meters out to pop to Coffey on the narrow to run in under the posts. Weaver converts, Carrick 14-3 ahead at 40 minutes.

With only a couple of scores in it, Connemara began a spirited comeback as their backs finally got into the game. Carrick’s defence continued to remain solid but they were pinged for being off their feet allowing Connemara pull another three points back.

Over the next five minutes Carrick seem to lose their way as a rejuvenated Connemara went hands and pushed the ball wide and round the Carrick defence to score their first try. Conversion missed but Connemara had now scored eight unanswered points and only trailed by three points.

Weaver, the try scoring hero from the first half, nearly turned villain as his long pass was intercepted for a straight run at the line but amazingly, from a dead start Weaver showed fantastic athleticism to get back and catch the a try bound Connemara man.

It appeared this was the wake up call Carrick needed as they regained their first half appetite. Aided by fresh legs through the introduction of two props and a flanker Carrick upped the ante.

Leading the line was Guckian and Foley who made the hard yards but were valiantly held at the whitewash.

Having tried route one rugby ,Carrick shipped the ball from left to right through the line where second centre O’Shannon darted into the corner for his first of the season, and Carrick’s third of the game.

Turning the screw, the pressure was cranked up as Connemara began to concede penalty after penalty. Sniffing another try Carrick persisted with the corner but through bad luck and stubborn defence came up short.

The penalties continued to come and Carrick opted for points through the boot of Coffey and Weaver to give some breathing space. With the game concluding Carrick’s forwards and man of the match Guckian got the reward as Gucks ran in under the posts from a set piece.

A well deserved victory and hopefully the start of strong season to come. Special mention to Owen McDermott who was out to support the lads on Sunday after breaking his leg in the build up to Tuam two weeks beforehand.