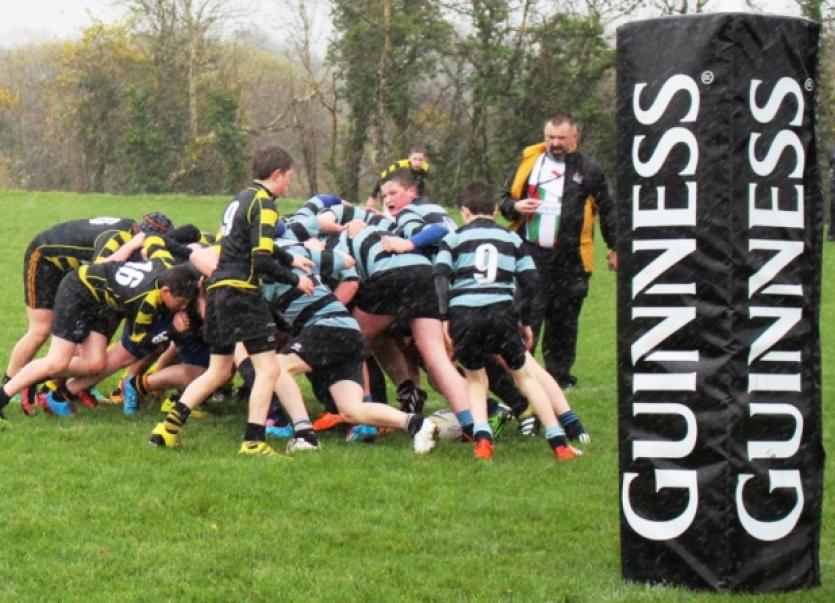 Carrick U14s hosted Castlebar for their first home League game of the season on Sunday November 8. The severe weather conditions didn’t dampen the enthusiasm of either team for a hard fought encounter.

Carrick U14s hosted Castlebar for their first home League game of the season on Sunday November 8. The severe weather conditions didn’t dampen the enthusiasm of either team for a hard fought encounter.

Castlebar got the better of the early encounters in the first 10 minutes pinned Carrick down inside their own 22. Castlebar came very close to scoring and only dogged defense kept the Carrick side of the scoresheet clean.

As the game progressed Carrick’s pack began to assert themselves creating the platform for some superb back line passing & running. Three tries in the opening half and two conversions gave Carrick a respectable 19-0 halftime lead.

As conditions deteriorated in the second half, Castlebar pressed hard testing Carrick’s defense continuously. The Castlebar scrum began to hold its own against the dominant Carrick pack, giving good ball to their backs creating a well worked try.

Castlebar’s continued to press but Carrick’s persistent defence paid off with three breakaway tries and conversions in the second half.

Credit must go to both teams for providing such an entertaining game in what at times were horrific conditions. Overall this was an excellent team performance with the entire squad taking their opportunities when called on.

Fixtures: What better way to spend a Sunday morning / afternoon than supporting your local Carrick RFC Senior and Youths teams. All home matches take place at Carrick RFC pitch in Castlecarra and entry is free of charge. Keep up to date on all news and fixtures by visiting CRFC website - www.carrickrugbyclub.ie