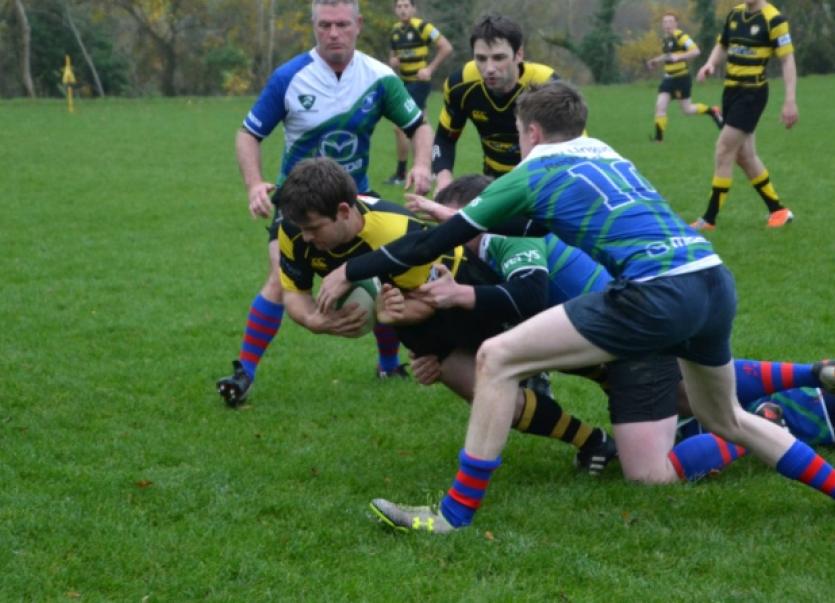 A home victory for Carrick RFC saw them notch up a scoreline of 37-0 over opponents Tuam RFC in the second leg of the league at the weekend.

A home victory for Carrick RFC saw them notch up a scoreline of 37-0 over opponents Tuam RFC in the second leg of the league at the weekend.

Despite having a number of players out with injuries the yellow and black jerseys of Carrick were all over the opposition as they took the match with a total of 6 tries.

An early penalty saw fly-half Kevin Coffey put the first points on the board, quickly followed by the first try of the match from captain Colm McWeeney, taking the scoreline to a healthy 8-0.

Cormac O’Keeffe came on soon after to take over from Derek Beirne at scrum-half, scoring Carrick’s second try within moments of his introduction with a Coffey conversion taking the score to 15-0.

Carrick’s confidence grew along with the scoreline and blood sub Stephen Guckian took full advantage of a scrappy lineout ball from Tuam, bursting through the back line to run the ball 70 metres down the pitch to score try number three for Carrick, sending them into the second half on a 20-0 lead.

The second half of the match brought more of the same for Carrick, with tries from second row player Dermot Foley and Michael Martin converting to bring the score up to an impressive 32-0.

Tuam tried in vain to hold Carrick off but following some incredible interplay between the backs, Will Weaver broke through to score the final try of the match, giving Carrick a final scoreline of 37-0.

With some serious commitment to training over recent weeks, the Carrick side are now starting to reap the rewards for their efforts and will be looking forward to their next league commitment against Connemara in two weeks’ time.

New members are always welcome and anyone interested in joining the club should contact the club captain on 086 823 8795.

Angel Day: Carrick Minis are asking coaches and parents to support the IWA Angel day on November 6. The IWA are looking for volunteers to sell pins locally on November 5 and 6. If interested please contact IWA on 071 9620569.

Pins will be available for purchase at minis and youths training sessions on Saturday and Sunday November 7 & 8.

Fixtures: What better way to spend a Sunday than supporting your local Carrick RFC Senior and Youths teams. All home matches take place at Castlecarra and entry is free of charge. Keep up to date on all news and fixtures by visiting CRFC website - www.carrickrugbyclub.ie