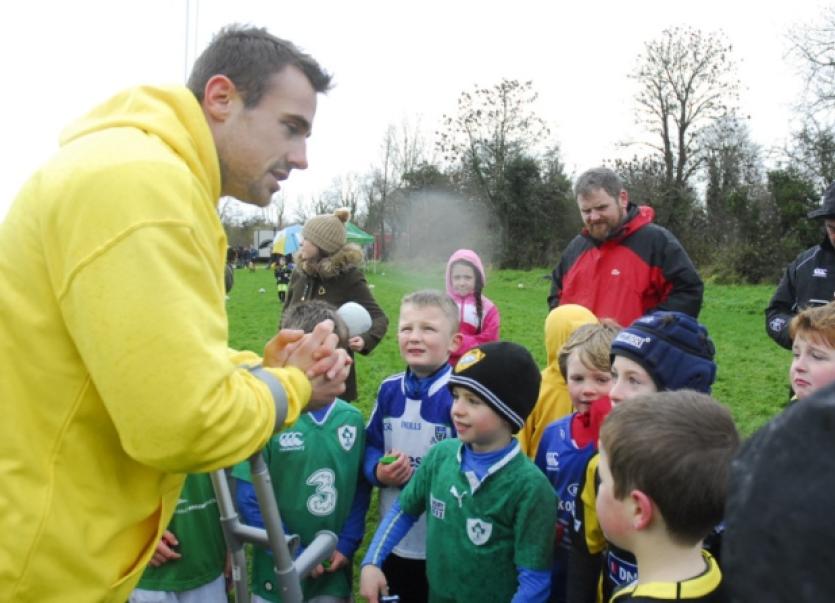 Irish rugby international Tommy Bowe was thrilled to see the turnout of young rugby players at Carrick-on-Shannon Rugby Club last Saturday morning as he joined up with club’s senior team for the “SUBWAY Train with Tommy” competition.

Irish rugby international Tommy Bowe was thrilled to see the turnout of young rugby players at Carrick-on-Shannon Rugby Club last Saturday morning as he joined up with club’s senior team for the “SUBWAY Train with Tommy” competition.

Carrick-on-Shannon RFC had won a session with the speedy Ulster winger thanks to the Senior player Jason Roddy, and Tommy was delighted to see the huge turnout - “I was blown away by the amount who turned up on a miserable day but the numbers who were here, from U8s up to U12s, is incredible.”

And Tommy, a brand ambassador for Subway, sees the sport of rugby gaining a foothold in areas not normally associated with the oval ball - “When I grew up, there is only really one club in the whole county of Monaghan and even looking around the likes of Donegal, there is more clubs opening in Donegal than in any county in Ireland.

“The game is becoming increasingly more popular and that is down maybe to the success that the Irish teams have had. I think success is going to bring more attention to it between the Irish set-up and the Provinces too.

“I suppose, being the only real professional sport in Ireland. When I was growing up, rugby was never going to be a profession whereas nowadays, young kids see if that if they love the game of rugby, they have an opportunity to make a career out of it.

“There are a load of different things but I suppose the fact that the Irish people love to follow teams are doing well and whenever the Irish team and the likes of Ulster, Leinster, Munster and Connacht are going well, it is great to see the support of people.

“I know up in Ulster, we try to get out to Monaghan, get out to Cavan, Donegal and Fermanagh and places that wouldn’t be rugby strongholds and maybe increase the awareness of the game”

Asked about the previous evening’s clash of his Ulster team with Leinster, Tommy said “it was a difficult game, conditions were difficult. Both teams were trying to play rugby but I think the defences came out on top, the organisation.

“I know people want to see free-flowing rugby but I think it was a very physical match and there will be a few sore boys today.”