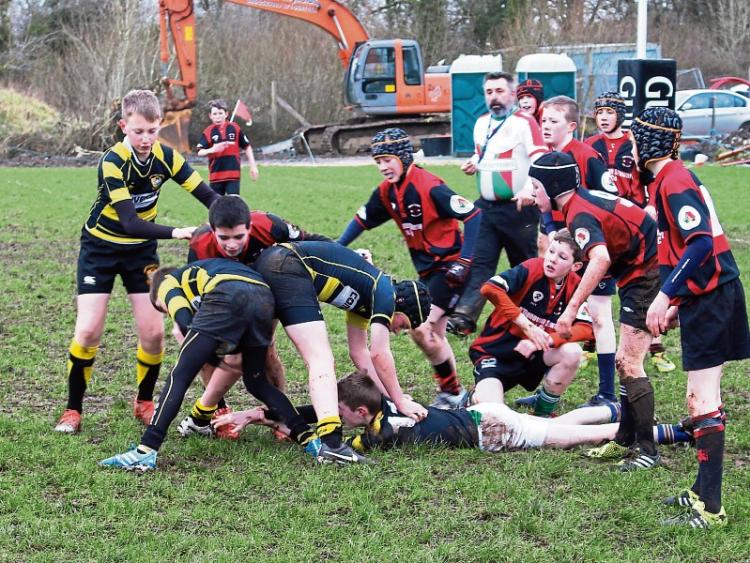 Carrick U14s clinched the Connacht U14 Division 2 (North) League title with an emphatic win against Erris RFC at home on Sunday.

Carrick prevailed 45 - 22 against an Erris side which battled till the final whistle. Carrick concluded its League campaign which saw home and away wins against Corrib & Erris and a home win against Castlebar.

Conditions on Sunday were not conducive to fluid rugby, overnight rain made for a heavy pitch but Carrick still managed to run in seven tries and five conversions. Erris started brightly and had five points on the board within the first five minutes.

Both sides traded scores with Erris leading 17-15 at the break. The strength and depth in the Carrick squad wore Erris down allowing Carrick to pull away in the last quarter.

Strong performances from the new players who joined the squad this season added to an all round team effort by the 16 players who took the field on Sunday.

Carrick's next competitive outing is the first round of the Connacht Cup v Ballina. Between now and then a lot of work remains to be done in training games & practice. Training Sunday 10.30 to 12.30.

Mini Blitz in Buccaneers: Last Saturday was another great opportunity for all our Carrick Mini Rugby teams to play against seasoned opposition. Although slightly down on numbers in some teams the Carrick players that did travel more than acquitted themselves in their matches against Buccaneers, Mullingar and Edenderry.

Thanks to all the players, parents and coaches who travelled to Athlone on Saturday to represent the club.

The U12 travelled in small numbers with no subs and faced two strong Mullingar teams. After a poor start the lads dug in and showed great spirit and team work and battled to the end growing stronger despite several knocks. Well done to all who travelled and speedy recovery to those who picked knocks on the day.

Our U10 side played firstly against Mullingar and later against Buccaneers. We started with only eight players and initially they were the stronger team but then Carrick started to improve their rucking and tackling resulting in a few tries of our own. The second half was a more even affair with both teams scoring tries and Carrick players pulling off a few try saving tackles.

The second match was against the home team. They gave us two players so it was 10 a side. In the first half the larger Bucs team dominated the opening few minutes but again Carrick came back into the match. Without any subs Carrick tired towards the end but still managed three tries in the second half. Overall the players can be very proud of their performance with good rucking and some very big brave tackles.

Carrick U9 played Buccaneers in the first game narrowly losing to physically stronger team. Their second game against Mullingar was a different affair with the team knuckling down to putting what they learned in training into practice. Upping their game kept Mullingar under pressure leaving both sides eventually having to settle for a draw.

The U8s had three great games this morning at the Buccaneers Blitz against Bucks A & B teams and Mullingar. There was a win, a defeat, and a draw, a super achievement for such a young side. There was some sublime tackling and passing from CRFC, rumour has it that Joe Schmidt has heard of the defensive qualities of CRFC U8s and is enquiring about a demonstration. Great performance from all players, Aaron, Andrew, Conor, Darragh, Iarlagh, Paidi, Ronan, Richie, Sean & Setanta.

Clobber 4 Club: Clobber 4 Club is back and we'd be delighted to take your clobber on Saturday, February 13, between 10:30am and 12:30am. Please tell your family and friends as the more clobber collected the better. (All clothes collected will be accepted except; curtains, duvets, pillows or cushions.