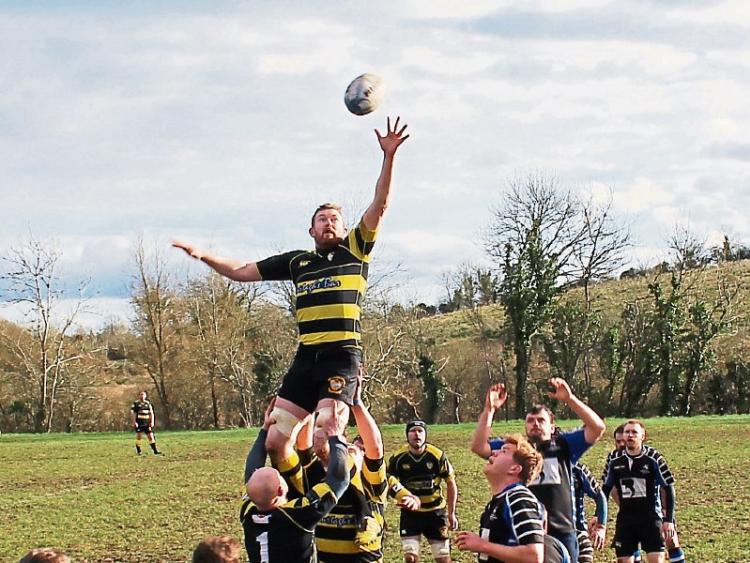 On Sunday, Carrick seniors took on Corinthians at Carrick RFC grounds on the Castlecarra Road.

On bright Sunday afternoon this match had all the intensity of a cup match where two well matched teams battled it out right till the end.

Carrick dominated most exchanges in the first half but some excellent defence by Corinthians prevented Carrick from crossing the whitewash on a number of occasions.

Late in the first half Corinthians conceded a penalty inside the 22 which Eddie Weaver converted to bring the halftime score to 3-0.

In the third quarter, it was Corinthians who kept Carrick pinned inside their own 22. During this period Carrick conceded two kickable penalties which Corinthians duly converted.

Carrick's first trip into the Corinthians 22 of the second half yielded a penalty which Weaver duly slotted over. With the game finely poised at 6-6 Corinthians took the initiative and were unlucky not to score in the corner with the try being disallowed for a forward pass.

However Corinthians were awarded a penalty for a Carrick infringement allowing Corinthians to take the lead.

From this point on, Carrick pinned Corinthians inside their own half and were unlucky not to score a try with Noel McDermott being held up just left of the posts.

The constant pressure took its toll on the Corinthians defence allowing Carrick cross for the only try of the game following a quick penalty on the left which was swept across the back line to cross in the right hand corner. Carrick went on to win 11 -9.

Training continues as normal as Carrick prepare for their next home fixture against Portumna on Sunday, March 6.

Carrick ladies team continue to develop their squad and prepare for upcoming challenge matches. Training takes place each Thursday night at 7.30 in Castlecarra.

New members are always welcome to come along and try it out. For further details contact Michelle on 087 1337212.

Next Saturday, Carrick Minis host Cavan RFC at Carrick RFC pitch on the Castlecarra Road. This will be a great opportunity for parents, families and friends to see how the young players and teams are developing.

Carrick-on-Shannon RFC would like to thanks everyone for their contributions in the recent Clobber 4 Club event organised for last Saturday.

During the recent Rugby World Cup Carrick Cineplex in conjunction with Carrick RFC hosted the screening of Ireland matches.

The provided rugby fans with the ideal opportunity to cheer on their heroes and critique the matches in the comfortable surroundings provided at the cinema.

Our thanks to Rebecca and her team for their continued support.

What better way to spend a Sunday morning / afternoon than supporting your local Carrick RFC Senior and Youths teams. All home matches take place at Carrick RFC pitch in Castlecarra and entry is free of charge.