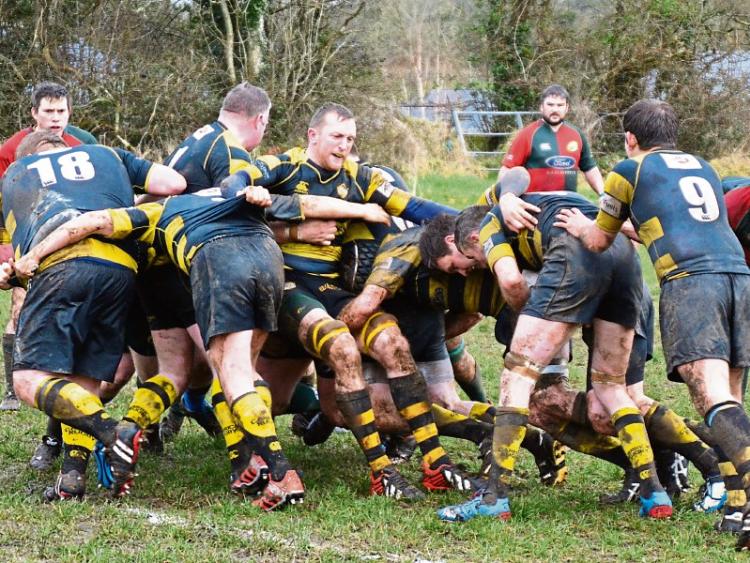 In a nail-biting home fixture this weekend, Carrick RFC took on Portumna in the penultimate match of the league.

After wins against Tuam and Corinthians, Portumna had managed to nudge Carrick from their position at the top of the table and had a one point advantage heading into the match with 24 points to Carrick’s 23.

With everything to play for, Carrick were in full flow and despite conceding an early try after a Portumna line-out, Carrick took back the lead with two penalty kicks from out-half Eddie Weaver.

A 6-5 lead gave Carrick the edge and the home side continued to dominate play, blitzing their opponents with pace and accuracy in attack, keeping Portumna in their own half and giving them no opportunity to break through.

A penalty for Portumna helped them to find their way back into the game, bringing the score to 6-8 with only ten minutes of play left on the clock.

Carrick kept their heads in spite of the pressure and the front row experience coupled with some sterling work by the backs enabled them to put their opponents under serious pressure, resulting in a last minute penalty being awarded to Carrick.

There was silence as Weaver prepared to take the kick as players and spectators held their breath as the ball hit the posts and then slipped over, giving Carrick the victory.

The 9-8 win sees Carrick regain their position at the top of the league table on 27 points and with only one more fixture to play.

Carrick will travel to Dangan in two weeks’ time to take on NUIG in the final match before the play-offs.

Carrick U10s travelled to Ballina on Saturday to take part in the Connacht U10 blitz. Carrick were selected to play in the "Scotland" group with Gort, Ballinasloe, Portumna & Castlebar.

First up was Gort who were quickly out of the blocks scoring a try before Carrick had settled into the game. This was the only try Carrick was to concede in the entire competition. Stung by this try, Carrick dominated, running out winners by a score of 6 - 1.

Next up was Ballinasloe, who despite some strong defending were unable to cope with the repeated attacks by Carrick before eventually going down 5 - 0.

Carrick took on the Portumna who started with some snipping runs. Carrick's defence held up without conceding a try and as the game rolled on Carrick wore down the opposition running in 7 tries without reply.

The availability of such a large number of players on the day, all of whom get to play by use of the rolling sub policy lead to a enjoyable and successful day.

Carrick U14s travelled to Ballina for the first round of the Connacht Cup on Sunday last. Both teams succumbed to the terrible underfoot conditions on a Ballina pitch which has seen too much rain over the past few months.

Flowing rugby this was not, but the stronger Ballina side cranked out their win in business-like fashion.

Carrick’s injury list forced positional changes in the starting 15 and despite spotting their hosts 10 early points, Carrick dug deep and made it an evenly matched encounter despite the unbalanced final score.

There were several stand-out performances amongst the 110% effort put in by the 18 players who togged out. Ashley Maziya ran riot around the Ballina forwards as did prop Josh Young who barrelled over for Carrick’s only try. Fullback Adrian Shortt converted.

U14 rugby continues on Sunday at 10:30 with an open invitation to new players, particularly those playing at school, to try it out before the end of the season.

Training each Thursday at 7.30 in Castlecarra. New members are always welcome to come along and try it out. For further details contact Michelle on 087 1337212

U11 Mini's play in Connacht Blitz in Buccaneer's on Saturday March 12. Keep up to date on all news and fixtures by visiting CRFC website www.carrickrugbyclub.ie.