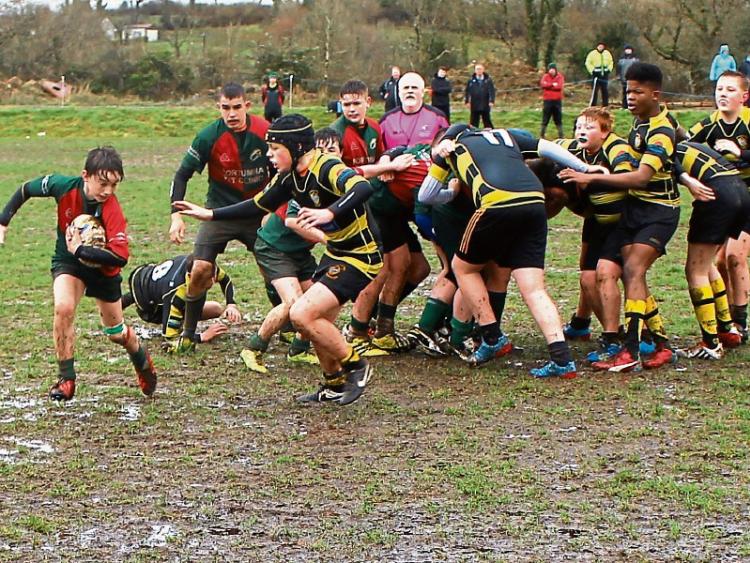 It was 'winner takes all' at a stormy Castlecarra rugby ground on Easter Saturday. Carrick U14s clinched a place in the Connacht Division II League final with a hard fought win over Portumna RFC.

As the two teams were also drawn to play each other in the Connacht U14 Plate competition, the managements agreed that the game would double - up to fulfil both fixtures.

Carrick prevailed 22-5 to progress in both competitions in a game they dominated from the outset.

Injury to prop Ruairi Morgan in training last week forced a number of changes in the starting pack.

Ashley Maziya slotted into loose-head for the first time this season, Ruairi King partnered brother Brian in the second row, and Eddie Coyle returned from injury at blind-side flanker to join debutante open-side Adam Langan and number 8 stalwart Seán Nee in a re-worked Carrick back row.

Conditions were not conducive to fluid rugby - overnight rain made for a heavy pitch - but Carrick still managed to run in 4 tries courtesy of Cian Singleton, Killian McAuley, Maziya, and Coyle, with a conversion provided by fullback Adrian Shortt. Captain Eoghan Matthews ran the show for Carrick and he, along with centres Eoin McLaughlin and Aaron Aldridge, provided a tackling master class to the Portumna backline.

The visitors were never allowed get into their rhythm and trailed 17-0 before their first sustained period of pressure in the Carrick half. The Carrick scrum was dominant with the King brothers in the engine room, and indeed it was strengthened when substitute Conn McNabola came in at loosehead.

Outhalf Senan Harte was equally confident whether attacking or defending and his new partnership with McLaughlin at first centre flourished despite the poor conditions.

A torrential downpour midway through the second half forced the referee to suspend play for 7 minutes. Prop Josh Young was undeterred as play resumed and ran half the length of the pitch only to be tackled two metres short of the Portumna line.

Substitute Rory Kelly was denied a certain try in support of Young when it was adjudged that the ball had rolled forwards when Young released it to the oncoming Kelly.

Strong performances from wingers Eoghan Shanley, Singleton, and the ever reliable Shortt at fullback added to an all round team effort by the 17 players who took the field on Saturday. This was undoubtedly Carrick's best full team performance of the season. The Plate quarter final and the League Final await a Carrick team that may now finally be realising its full potential.

Carrick having secured top spot in the league have home advantage as they meet Corinthians in the semi final of this year's Connacht J2 League. Corinthians travel to Carrick without fear knowing that only two points separated them when they met in February, Carrick coming out on top 11-9.

Come out next Sunday April 3, and be Carrick's 16th man by supporting your local team as they strive to reach the J2 League final. Admission is free and why not avail of a complimentary hot beverage at half time.

After a difficult season our under 12 travelled knowing there was going to be some hard tests in store. We arrived at the pitch and were straight into action against Castlebar.

With some of our players still travelling we got stuck in and played very good rugby and were unlucky not to come away with a win in our first game. Our next two games were against strong Ballinasloe and Westport sides. Next up was a well drilled Sligo side whom we matched score for score until the very last play when they ran in a late try to sneak victory.

Boosted by our display against Sligo Carrick's confidence grew as we took on Ballyhaunis in our fifth game of the day. Saving our best until last the team put in a great team performance to secure a brilliant win at the end of a hard day. Well done to all players and parents that travelled on the day.

Carrick ladies team continue to develop their squad and prepare for upcoming challenge matches. Training takes place each Thursday night at 7.30 in Castlecarra. New members are always welcome to come along and try it out. For further details contact Michelle on 087 1337212.

Carrick U8 and U9s travel to Castlebar to take part in their respective Connacht Blitzes.

What better way to spend a Sunday than supporting your local Carrick RFC Senior and Youths teams. All home matches take place at Carrick RFC pitch in Castlecarra and entry is free of charge.