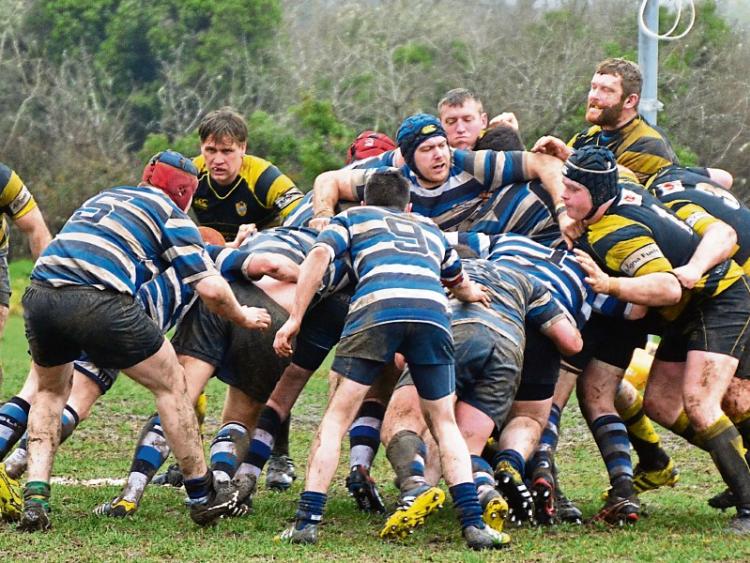 Carrick RFC put in a classic performance during the eagerly-awaited semi-final against Corinthians RFC.

Despite missing some key players through injury, the Carrick team put in a sterling performance against their Galway opponents, resulting in an 10-10 draw.

With the league final in their sights, both teams came out fighting, with neither side prepared to concede a point. Although both Carrick and Corinthians had a first-half shot at the posts after being awarded penalties, neither team was able to turn this into points and the score line remained at nil all.

More than 30 minutes of play had passed before either side managed to put any points up on the board, but it was Carrick who took a hard won try, with Noel McDermott crossing the line to put the team 5-0 up. A conversion by Eddie Weaver took Carrick into halftime with a 7-0 lead.

With difficult pitch conditions, Carrick found it difficult to hold Corinthians at bay during the second half of play, and conceded a penalty which gave their opponents the chance to narrow the margin to 7-3.

Despite most of the play being in their own half for the remainder of the match, Carrick defended their line well against a strong Corinthians pack. With only two minutes of play remaining, and still recovering from a costly yellow card, Carrick conceded a try, giving Corinthians a one point lead.

Corinthians went on to convert, increasing their lead to 10-7, and with only seconds left on the clock, Carrick managed to get the ball down to the Corinthians half for a last minute attempt to pull the score back in their favour.

Some scrappy play and poor discipline by Corinthians led to a penalty for Carrick, and with a chance to equalise, Carrick chose to take a shot at the posts.

With a place in the final still to play for, Carrick were under serious pressure, but the team showed their mettle and fly-half Weaver secured the points, giving a full-time score of 10-10.

The league rules now dictate a replay at Corinthians to decide which team will go forward to the league final which is scheduled to take place at the Showgrounds in Galway at the beginning of May.

In their first round match of the Connacht Plate, the U13s drew on their considerable skills and athletic abilities to win 28-19 over Loughrea who travelled up to Carrick.

Fielding a considerably bigger pack, Loughrea claimed the first score within minutes of kick off ,when their no 8 steamed over for a converted try. Woken from their slumber, Carrick's ace winger Oliver Charles broke clear to score Carrick's first try, with the conversion by Mark Lenehan.

Over the course of the game, Loughrea's winger scored two more tries, one of which was converted, bringing their final tally for the day to 19.

Superb and opportunistic converted tries from Daniel O'Sullivan, Kyle McCrann and Patrick Charles sealed the win. An excellent performance from each panel member has created confidence and a solid platform to progress further in the Plate competition.

Twelve brave young men represented CRFC in the Connacht blitz in Castlebar and they did the club very proud. We played four matches and were victorious in three. It was the final tournament of the year and all the team gave it their all. There was some tremendous tackling and excellent tries scored.

A big thank you to all the players and their parents not just for today but for all the year and the coaches are already look forward to next season.

On March 29, Carrick travelled west to play in the U9 Connacht Blitz. Carrick played four games, grinding out a draw in their opening game against a very strong Gort side. Next up were a determined Ballina "Red" side who went down by three tries to Carrick.

Short on numbers, the Carrick players began to tire and were unfortunate to lose narrowly in their last two games to Monivea and Ballina "Blues". Our thanks to the players and parents that travelled on the day and we look forward to 2016 / 2017 season with great enthusiasm.