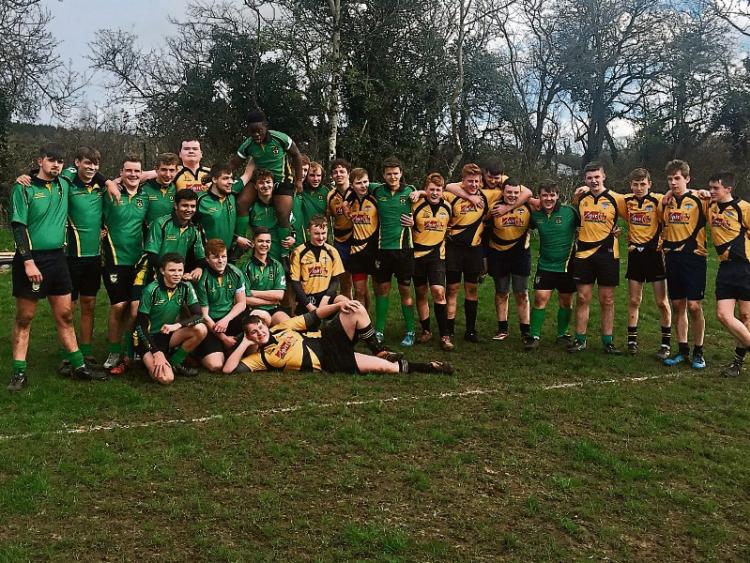 Last Saturday was a lovely spring day in Carrick-on-Shannon when the Carrick U17s team hosted an end of season friendly match against the visiting English side from Stevenage RFC.

For the Carrick side, this was not only the last match of the season, but also their first, and this rustiness paid dividends for the visiting English side.

The kick off whistle had hardly been blown when Stevenage romped in for the first of many tries.

Carrick struggled in the early part of the match to counter the intensity and fast offloading skills of the visiting team, and quickly found themselves chasing the game.

Stevenage racked up consecutive tries in the first half, and Carrick struggled to get any possession to work with.

A change around in the scrum settled the Carrick side, and they started to fight back, and finally they scored a try of their own.

One of the Carrick players pounced on a loose pass and ran the length of the pitch, only to be denied close to the visiting team’s try line.

The half time score was Stevenage RFC 40-5 Carrick RFC.

Carrick started the second half brightly and came close to the Stevenage try line on a number of occasions, only to be denied by the sturdy English defence, and the visiting team counter-attacked with some sparkling play of their own, adding to their first half tally.

The last ten minutes, however, proved to be too much for Carrick, who started to run out of steam, conceding a brace of tries to the visitors.

The final score was a flattering 67-5 for the visiting team, but this did not reflect the effort and passion that the Carrick team played with.

Despite their loss, the Carrick team never dropped their heads and played to the final whistle.

It was a Samson vs Goliath match, and the attitude and positivity of the Carrick players, both on and off the pitch, was a credit to the club.

After the match, both teams headed off to KFC for some end of match grub, and a bit of craic.

On behalf of Carrick RFC I would like to thank the Connacht Branch referee for the day, Carrick’s own Kevin Coffey.

Carrick RFC would also like to wish the Stevenage players, coaches and supporters a warm thank you and safe journey home to England.

The U17 coaches would especially like to thank all the players on the Carrick squad, who despite having a difficult season continued to participate in training and who came along on Saturday and played their hearts out, in what always was going to be a difficult game.