PREVIEW: Everything you need to know about Ireland v Japan at #RWC2019 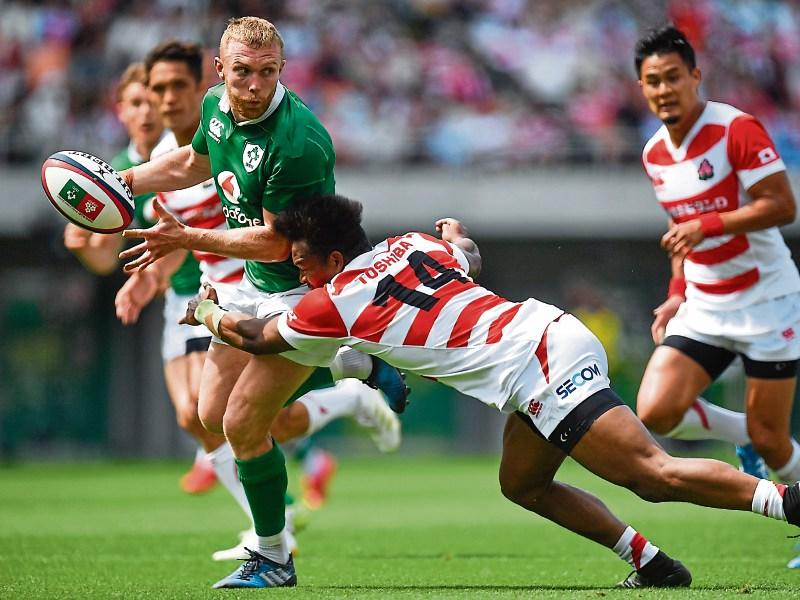 PREVIEW: Everything you need to know about Ireland v Japan at #RWC2019

Ireland take on hosts Japan in their second Pool A match at the Rugby World Cup on Saturday morning, 8.15am (Irish time.)

The game will be aired live on RTE television in Ireland, as well as on eirSports and ITV. The match takes place at Shizuoka Stadium Ecoba.

There was never a prospect of Ireland’s head coach Joe Schmidt treating this game with anything other than the utmost seriousness, a point underlined by his starting team which is very close to full-strength. Seven weeks ago, Schmidt was asked by Japanese journalists visiting Ireland for his thoughts on the host team. Another coach would have spoken in polite generalities; Schmidt rattled off a string of names, all perfectly pronounced, and identified each of their strong points. He has done his analysis – and then some.

Japan, naturally, have been making noises all week that the pressure is all on Ireland. That’s not strictly true, because coach Jamie Joseph is going all out to get Japan into the knockout stages for the first time and that will require a victory over either Ireland or a wounded Scotland in their final pool game. The latter now looks a far more realistic prospect, but Ireland know they switch off at their peril – not least because Schmidt and defence coach Andy Farrell will have reminded them forcibly all week.

Can Japan find the gaps that might allow their dangerous back three – particularly Kotaro Matsushima, scorer of a hat-trick against Russia - to inflict some damage out wide? It’s asking a lot – probably too much, given the exceptional line speed Ireland’s defence produced against Scotland.

Excellent though they were in Yokohama, pretty much every Irish player who was put before the media this week spoke of the need for the team to be better again next time out. Competition for places has arguably never been more intense in the 32-year history of Ireland’s World Cup participation and every player who gets on the pitch on Saturday will know that Schmidt will miss nothing as he considers his best team for the likely quarter-final against South Africa in just over four weeks’ time.

Beyond the contest, there is the occasion – and what a prospect it is. With more than 50,000 set to pack Shizuoka Stadium Ecopa and no shortage of fervent supporters on both sides, it should be a spectacle to remember as this already unique World Cup continues to gain momentum.

Ireland’s loose-head prop Cian Healy, who wins his 93rd cap in Shizuoka, found himself in the news this week when accused by Japan’s Yusuke Kizu – a tight-head who doesn’t make Saturday’s 23 – of illegal scrummaging. “Their loosehead prop steps out, so they try to attack from the side, that’s my impression of their scrum,” Kizu claimed.

Denying the charge, Ireland coach Joe Schmidt commented on Thursday: “I think we're probably, if not the least, then one of the least penalised scrums in international rugby. We do our very best to scrum square. We don't step left. What was said by Kizu was a big surprise for us. It will probably provide a little motivation for Cian when it comes to the game on Saturday.”

Japan coach Jamie Joseph has surprised many by leaving his captain and inspirational blindside flanker Michael Leitch on the bench. Instead, openside flanker Pieter Labuschagne will captain the team, eight days after scoring a standout try against Russia. Number eight Amanaki Mafi, returns to the side after missing that opening pool game.

Tighthead prop Jiwon Koo, second-row Luke Thompson and full-back Ryohei Yamanaka all start after coming off the bench in Tokyo. Kazuki Himeno moves from number eight to flanker and William Tupou from full-back to winger.

Full-back Rob Kearney and winger Keith Earls return for Ireland after sitting out the win against Scotland, replacing Jordan Larmour and Andrew Conway. With fly-half Johnny Sexton not risked after picking up a knock against the Scots, Connacht’s Jack Carty will partner Johnny Sexton in only his second test start. Joey Carbery will prove fly-half cover on the bench after recovering from an ankle injury sustained last month.

Ireland Ireland won the first match between these teams, 32-16 at Lansdowne Road in 1991. That was also their first World Cup meeting.

Japan, at RWC 2015, are the only team in tournament history not to progress to the knockout stages despite three victories in the pool phase.

Ireland flanker Peter O’Mahony was captain of his country’s U20s when they competed in the Junior World Championship in Japan in 2009. The team finished eighth.

Lock forward Luke Thompson is the only player to have represented Japan at four different World Cups. Centre Yukio Motoki was also called up four times, but remained an unused replacement in 1991.

“They’re going to have a very vocal hometown crowd. It was great for us to play a 'home match' in Yokohama Stadium with The Fields of Athenry belting out. I think we might be in the minority this week and they're going to have to give us as much volume as (they) can.” Ireland coach Joe Schmidt

“In terms of legacy for the tournament, as a team, we want to do something we've never done before and that's make the top eight. That will leave a legacy for rugby in Japan, but the quality of our play and how we conduct ourselves as a team is also important." Japan coach Jamie Joseph