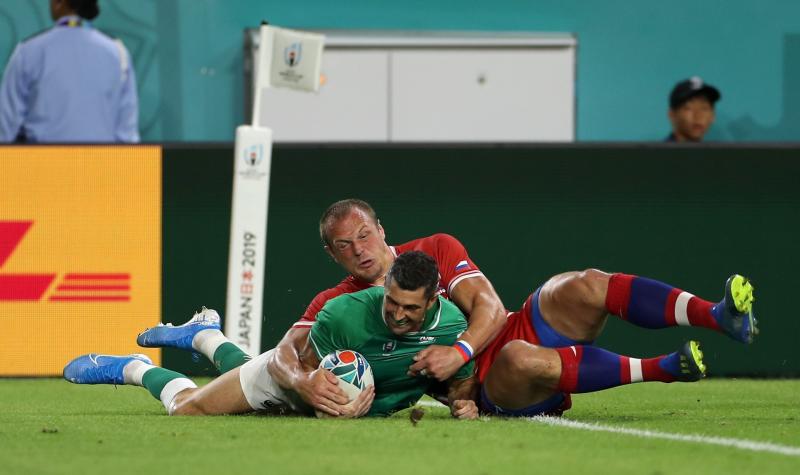 Leinster's Rob Kearney's gets over for an Irish try against Russia

In a post-match interview, Munster’s Niall Scannell and John Ryan insisted that Ireland remain on track in the Rugby World Cup, despite widespread disappointment over their performance in beating Russia, the lowest-ranked team in the tournament.

While Ireland eventually won 35-0, it took them more than an hour to secure the bonus point, through Munster wing Andrew Conway’s try.

“I didn’t really think it was sub-par to be honest,” Scannell said after the game. “We had some good interplay. I thought our set piece functioned well. I thought the subs had a good impact. We are pretty positive about how it went.

“These guys (Russia) are proper rugby players,” the hooker added after winning his 18th cap. “This is international rugby. Teams are not just going to go away.”

Russia brought a high level of physicality to most of the game and prop Ryan said: “They were big boys out there, they're strong men. I felt a few of them on the back of my neck. It was strange, it wasn't exactly hot, but the ball was like a bar of soap.”

The fluent, accurate performance they would have wished for after their shock defeat to Japan never materialised. It was a victory that will hardly have sent a chill down the spines of either New Zealand or South Africa, their likely quarter-final opponents.

Russia may have been ultimately outclassed, but in frustrating Ireland for long periods they were never less than massively committed. They left the field to a huge ovation from both the neutrals and the Ireland supporters. It was fully merited.

Ireland coach Joe Schmidt, not surprisingly, chose to accentuate the positives. "There were more things that pleased me, definitely," he said. "We started really well again and got those two early tries, as we did last time, and then made a bit of hard work of it.

"There was a bit of consternation in that third quarter when we didn’t get the bonus point try but it was great to see Andrew Conway streak away to get that fourth try."

Amid conditions not as oppressive as feared, Ireland showed early determination to put the Japan defeat in the rear-view mirror. After only 90 seconds, a familiar training ground move from the Schmidt playbook created acres of space for full-back Rob Kearney to gallop clear for the perfect start.

The difference in class between the sides was evident on 13 minutes when Ireland made their second big thrust in the Russian 22 and came away with another seven-pointer, after Johnny Sexton’s lovely grubber kick was converted by Peter O’Mahony.

So far, so good for Ireland but they began to find their momentum halted by handling errors and unyielding Russian defenders.

ON THE INJURY FRONT

Jordi Murphy, thrown into the fray just a few days after arriving as a replacement for the injured Jack Conan, left the field after 26 minutes with a rib injury and was replaced by CJ Stander.

On Friday morning, Japan time, scrum coach Greg Feek provided an update on Murphy: “We’ll give him the best chance to get it right. We’ve got a decent turnaround to the next game so we’ll be able to assess him and go from there.”

Should Murphy be forced home, Munster’s Tommy O’Donnell would be a strong contender to replace him, but the name of Leinster’s Devin Toner was also being bandied about in Kobe.

In his World Cup debut, Ryan helped propel Rhys Ruddock over the try line from five metres, but even with the 100-1 underdogs being shown two yellow cards Ireland could not make their numerical advantage count . The bonus point was a worryingly long time coming.

Finally, on 62 minutes, they got the job done. Substitute fly-half Jack Carty’s clever kick was picked up by Keith Earls, who found his Munster team-mate Conway with all the space he needed.

If the performance was far from convincing, it at least had a finishing flourish of some class, with Jordan Larmour and Earls combining beautifully to send Garry Ringrose in for the fifth try.

Looking ahead to their final Pool A game in Samoa on Saturday week, Scannell said: "Samoa are a good team, they're unbelievably physical. They've got guys playing all over the world.

"They have a ridiculous X factor, and if you start looking beyond that, well, that's what people were accusing us of doing against Japan, so it won't be happening again."